Enough with the excitement already! We’re very well watered now, thank you. The extra razzle-dazzle of thunder and lightning was a bit much however especially at 12:30 am (waking me out of a sound sleep) and then more for good measure at 6:30 am (neener-neener! I was already awake) which went on for some time. I want the nice sun back now please.

So while I was waiting for the lightning to abate before I felt safe to turn on my computer, I got some work done on my tawashi. The Linked-Rings that I mentioned yesterday was fun and fairly quick to make: 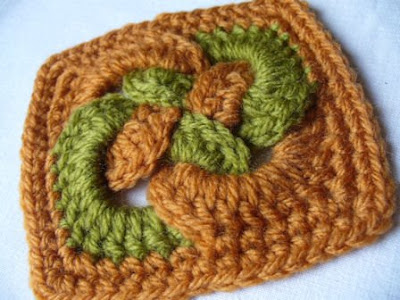 Now I want to make another one only swapping the colours. But first I’m in the middle of crocheting the Spiral Tawashi found here which is also a fun project. I can see why folks get hooked (punny!) on these things, particularly the crocheted ones which go very fast. Finally, a use for scratchy acrylic yarns! The Japanese crochet charts are not hard to follow even if you can’t read the words. The only hard part is figuring out how to assemble the finished puff but there are helpful notes on its Ravelry pattern page. Have I mentioned how much I love Ravelry? So much inspiration and information. I will never lack for things to make! Ever. Now I want to make a set of Swiffer covers. Why continue to use disposables? Yes, there are several patterns for such things, both knit and crochet.

I promised to show the llama and alpaca samples that I spun up but I had to wait for enough natural light for the photography session: 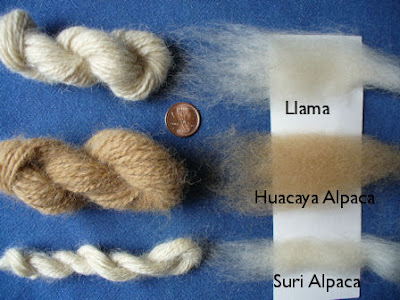 It was an interesting little selection. From the top that’s white de-haired llama, tan huacaya alpaca (the little fuzzy guys) and white suri alpaca (the ones with long shiny locks). I spun them all on my Louet Victoria wheel using the regular flyer and the 8.5 (middle) ratio. The llama was spun with a short forward draw and a fairly tight tension to give a fast draw-in. I was afraid to overtwist it! It had a few neps and a little vm but was pretty soft and nice. You can still see a few long straight guard hairs but most have been removed. It felt like spinning kid mohair blended with angora bunny and the resulting plied yarn in approximately fingering weight is very soft and has a halo. The huacaya alpaca was a very nicely carded sliver and spun easily with a supported long-draw. There was almost no vm and the plied yarn has a nice fuzzy surface but is the coarsest of the three fibres. Still quite soft though and is a similar size as the llama but more spongy. It reminded me of spinning dog down only much softer. The suri alpaca was spun with a slightly looser tension in a short forward draw at a finer lace weight. It has a nice sheen and a bit of halo and is still very soft. I thought mostly of very soft baby kid mohair as I was spinning it. I finished all the yarns as per Judith MacKenzie McCuin’s Torture Treatment by washing the yarn then rinsing in hot water and then cold, alternating a few times and ending by smacking the skeins on the Formica bathroom counter several times, rotating them around to reach every part. This kind of fulls the yarn a little and makes it nice and fluffy. I didn’t go so far as to get out the toilet plunger though. This extreme finishing isn’t recommended for all yarns but does a lovely job if you plan to knit with the llama and alpaca and don’t want a lot of shrinkage or felting afterward. I don’t really have enough to sample knitting however. Or maybe I’m just too lazy.

The suri alpaca is still quite rare but very popular with farmers and fibre fanatics. It is a finer and softer fibre than the huacaya and has the shine that the latter lacks. The animals are also quite different in both look and temperament. There’s an interesting but somewhat technical article in PDF here on the suri from a breeders’ association website.

Did I mention that my 8 Hearts Swap turned up? Whew. The swap mistress found it at her ex’s after we found out that I accidentally sent it to her former instead of her current address. Of course he didn’t mention that she had mail waiting there for two weeks. At least he didn’t do something nasty with it. Thanks goodness. So I’ll show you what I get in trade when it comes. She’s waiting on one more submission.

Hmmm…my pleading must have worked some because I think it’s brightening up! I certainly can see that I need to vacuum. Or maybe the dead flies were a hint?