As I was plugging away on my daily yard of the Circus Blanket, listening to podcasts and trying to be as ergonomic as possible so as to save my back and wrists, I was thinking about why I weave. Those of you who know me through this blog or in person for only a few years might think that I don’t really weave much at all. Which is true, but only relatively recently. The truth is I have lots of weaving yarns and expensive tools and even ideas of what I’d like to make but I just haven’t gotten around to it. I kind of got out of the habit or just lost interest for awhile. For me that’s usually merely temporary because I cycle through different crafts, slowly or quickly, but rarely give up something forever. That’s why I never get rid of my equipment or materials. You never know when the bug will bite again. I actually used to weave a lot. You can tell because it’s all over my house and I make use of it every day: curtains, rugs, tea towels, napkins, placemats, runners, scarves, vests, jackets, coats and more. And at night I sleep under my blanket.

I’ve been weaving for a very long time, since the 1970’s in fact. I started with simple things: pin-weaving on cardboard, belt weaving, simple frames with nails hammered in (crookedly!) and even a forked branch. The lumpy funky earthy stuff was very popular back then. It went well with my first thick and thin handspun dyed in a canning pot in the kitchen. (My kids called it Mom’s wool soup.) I taught some of these off-loom or simple frame loom techniques at the local community centre and I remember several students being disappointed that I wasn’t going to teach them on a floor loom. I didn’t have one (yet) and the centre had no budget and nowhere to put one or the (preferably) several they would need for that type of class. And have I mentioned that I was totally self-taught? I never attended a weaving class taught by someone else until I had been weaving for years!

Eventually of course I couldn’t resist the temptation to weave bigger and faster and got a floor loom. Since I was still fairly unfamiliar with weaving equipment it was total crap, hand-built by somebody’s dad out of light flexible pine. I didn’t know any better and was happy to have something “real” to weave on. It was so lightweight it literally walked across the floor when I was beating in the weft. I kept having to push it back or risk being beaten off my bench. The beater also flexed making a straight cloth rather difficult to achieve but I still managed to make quite a number of items on it before I got a much better loom loaned to me. A long-time member of my weaver’s guild (yes I finally found it!) was rebuilding her house and needed to store a small 8-shaft Leclerc Minerva jack loom for a couple of years. Yes, please! I made a lot more things on that little 24” loom and learned about pattern weaving on 8-shafts. I also borrowed another Leclerc, a 4-shaft counterbalance this time, for another couple of years. In 1989 I finally had saved enough money to buy a good loom, an 8-shaft 45” wide Woolhouse Gertrude countermarche. This is the same loom I use most often today though I also have a 12-shaft Woolhouse Carolyn 23” wide table loom on a floor-stand and an older 24” wide 4-shaft Rasmussen table loom (which currently resides at Milady Daughter’s). And of course there is a whole collection of other needed equipment such as reeds, warping boards, shuttles, bobbins, bobbin winders, temples, etc. The stuff just accumulates. Yes, it does.

Through the years of weaving exploration I discovered the types of things I prefer to weave. I love lots of colour but also enjoy weaving complex structures — unfortunately both at the same time can create kind of a hash. (Ask me how I know!) As my old friend weaving teacher and editor Madelyn van der Hoogt says, you’re either a colour/texture weaver or a pattern/structure weaver. I tend to mostly be the latter but I’d like to hope I have more colour sense than most pattern/structure people. Of course you can’t tell any of that by my current project! It’s sort of a dog’s breakfast. I mean, a Circus! (Cue the calliope music.) Ahem.

As Syne Mitchell, podcaster (WeaveCast), editor (WeaveZine), and science-fiction book author, says: “You have to be warped to weave.”

In between weaving sessions (and avoiding the vacuuming), I’m nearly finished the Stargazer Sweater, which seems rather long and lean for a child’s sweater. I made the length of both the body and sleeves a half-inch shorter than the pattern said but it might have been better an inch shorter still. I can always hope that he’ll grow into the length before he grows out of the width. Meanwhile the sleeves can be rolled up.

I also have been having a ball crocheting tawashi. I still haven’t exhausted my two balls of Japanese yarn and have 4 done so far. There’s the Spiral Scrubbie: 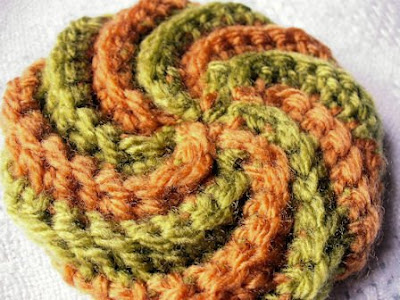 And another Linked-Rings, this one with a hanging loop: 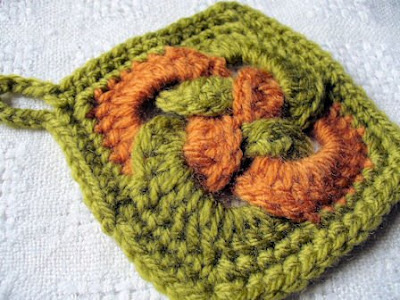 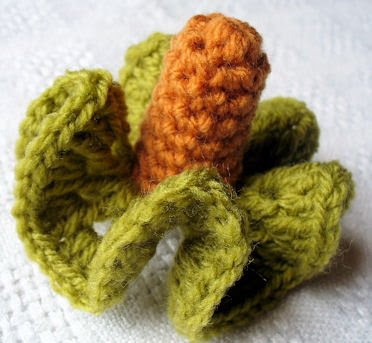 It makes a great keyboard duster! (Free pattern here.) I’d like to get one more Spiral out of the yarn before I run out.

Hello, Louisa. I love loom stories! I wonder if you would ever post any pictures of your old hashes. Maybe they aren't all as hashy as you remember. . .

I like the idea of joining color/texture to pattern/structure. When it works, it works amazingly. I think Malin Selander might be the best example of that. I heard about Madelyn van der Hoogt's categories from my teacher, a fanatical structure weaver who did complex weave exchanges. I found I really resisted the idea of having to be one or the other. I'm still a new weaver, so I'm still trying everything out, but my ideal would be to grow into a pattern weaver so subtle that I never approached a project blinkered by my draft. Blinkered as in: "Okay, now I'm going to weave some diamond twill, so I'll need two colors that match and I'll need some dimensions." But also a color/texture weaver so versatile and knowledgeable, I understood how pattern could be integral to exploring my yarn.

However, I don't totally understand the debate yet. I'm certainly prejudiced against non-function-appropriate fabric, unless it's for a studio art piece, so maybe that makes me an embryonic pattern weaver?

I'm intrigued by your tawashi. So cute! Do they work? See, my only experience of mixing acrylic yarn and water is an unhappy tactile memory of sodden mittens.