Since the Bride & Groom have opened their presents and are happily on their honeymoon, I can finally get around to showing off their gift:

Wedding Present Tea Towels
(and a couple of spares) 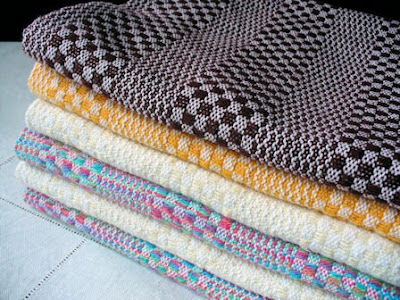 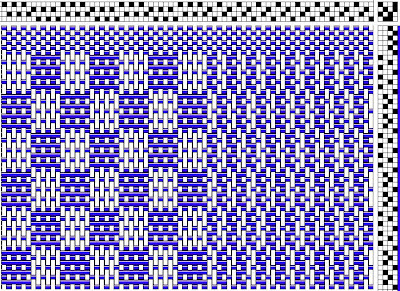 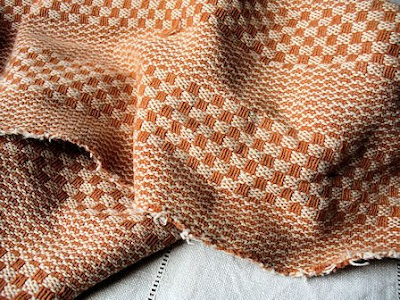 Structure is a 4-shaft/4-treadle huck variation in 2 “blocks” (short and long versions of the same 1-3-2-4 threading). Plain weave is 1-2 vs 3-4 and used for hems. Towels are completely reversible, appearing the same on both sides (though actually counter-changed). Here’s the original that I drafted using a Basic program on my first PC computer and printed out on a dot-matrix printer on pin-feed paper. It sure contrasts with the current print-out from Fiberworks PCW 4.1 Silver program and inkjet printer that I use now! Of course I still have the original magazine. I never get rid of anything. 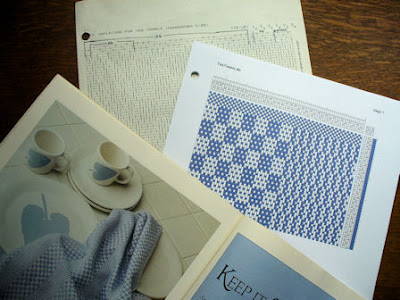 Comments: I love these towels! I must because I’ve woven a couple of dozen of them now and they are all I ever use in the kitchen. All these yarns came from my stash. I was hoping to put on a longer warp but didn’t have enough of the white cotton. Just as well since it took enough time to weave the 6 of them before cutting off to finish before the wedding.

My notes say to let the weaving pull in at the selvedges immediately and it does — a lot! It seems dangerously drawn-in and the edges “smile” but it all works out fine in the end. I did have a bit of trouble with the selvedges beating in correctly and leaving a few loops until I got the rhythm going properly. I wove 1” or so (I counted 20 picks) for hems on each end and 40” of the pattern between them. (I used a marked grosgrain tape pinned to the cloth and walked the pins along which worked very accurately.) 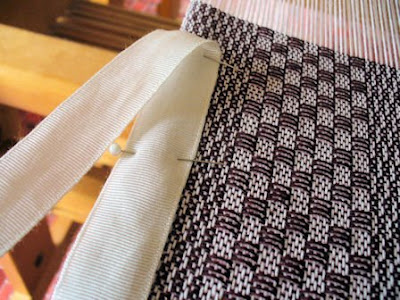 I used a contrasting thread to mark the cutting line in between each towel. After cutting off the loom and separating the towels, I immediately ironed in the twice-turned hems and stitched them on the sewing machine with white cotton thread. After the hems were secured, I washed and dried them by machine. I was wise enough to suspect the burgundy weft might run some colour in the wash so washed it and the sample separately with Synthrapol. Good move because it took 2 washings in hot/cold rinse to get the streaks of pink off. The second time all was fine but I will still be careful for the next several times it needs to be laundered and not put it in with the light load. At least it’s one that I’m keeping (along with the yellow one — they match my curry-and-chili-coloured kitchen) so I won’t have to explain how to care for it! After finishing they only need to be folded since they come out of the dryer wrinkle-free.

The Ocean Blues Socks are dry now but I haven’t got a photo yet so hopefully I’ll post them tomorrow. I also did the dyed yarn for 2 pairs of socks and they came out very well but are still drying on the line in the basement. Today I’ve been busy with the Eyelet Yoke Cardigan for Princess Pink. After knitting a proper swatch from the pink Smart yarn (superwash wool) and blocking it so I can get a more accurate idea of the stitch and row count, I’ve been working the calculator bigtime. I think I’ve completely redone Sarah’s cute pattern to accommodate my gauge and still get something resembling the original. I will even have 7 rows of the eyelet pattern on the yoke instead of only 5. The decreases between the eyelet rows gave me a big headache because I was trying to keep the same angle as the original. I think I’m close but it’s lucky that knitting is forgiving. I won’t know if I actually got it right until I get there — at the very end! I also decided that, whatever the negative comments might be on Ravelry, I need to knit the body in one piece. Why would you seam if you don’t have to? And I’ll do the sleeves on dpns too. The only tricky bit is getting them all joined together to start the yoke. It’ll be fun to see what happens when I knit that far!

Hey... that's weaving! *very* nice! I have yet to try that pattern but will. We all seem to have our fav pattern (reversible of course)
I'm sure the bride and groom will appreciate those daily for many years to come.

The fact the hand woven type of towel last for years is a point missed by most people who buy thinner commercial ones! I met someone who had bought one of my early tea towels and it's still in use and looks good.

That does look like a good towel pattern. Your gift will be treasured. It's interesting how minor variations in weave affects the thirstiness and overall usefulness of a towel almost as much as the yarn. My current favorite towels are made from an old and clearly much loved tablecloth I bought at the estate sale of a little old Norwegian woman. My husband probably thought I was crazy to cut around the stains and hem towels from a 60 year old tablecloth, but a good kitchen towel is a joy for (very nearly) ever.

I wove towels from this pattern a couple of times and sold them at the first show I attended. Your's are beautiful!!!!!!!!!!!