Socks In The City

In all the Secret Project kafuffle, I’ve been forgetting to post Stargazer’s Toddler Socks, the ones that match his Pullover. So here they are: 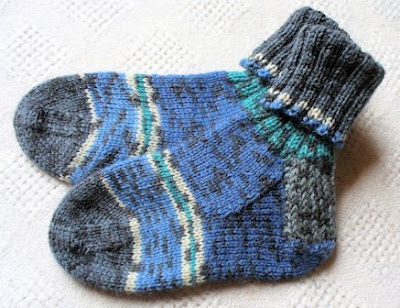 Comments: As is the sweater, these are still a bit too big for Stargazer. The foot is 5.5” long. . I do like how the colour transitions in the yarns coincided with the sock sections.

And while I was at it, I started a new pair of socks. I had originally bought 3 balls of the ON223801 for the sweater (and socks) but when they used less yarn than I anticipated, I traded the last ball for a different colourway: ON223600. This one is tropical oceanic blues and turquoise so I’m calling them the Ocean Blues Socks. 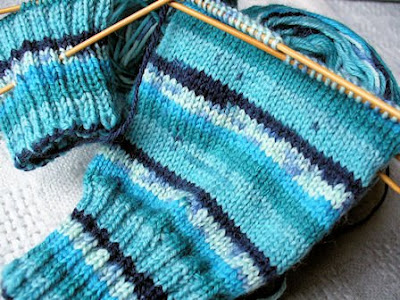 I’m working them in my usual generic pattern and they will likely be given away eventually. I have many folks on my Sock List and I think I know who these are for. But I’m not sayin’ yet.

As for the A-Maizing Socks, they are frustrating me so they’re taking longer than they should. 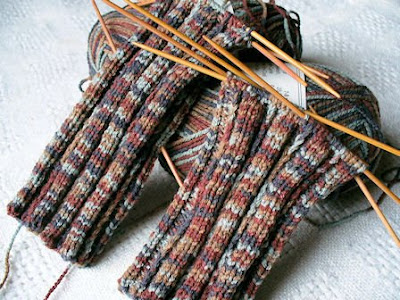 I’m liking how they look and feel a lot but this yarn is splitty and combined with the twisted stitches is a bit of a PITA to knit with. If it’s not fun I tend to pick up other things first. I’m nearly at the heel turns on both socks though so after that I will only have half the round in pattern and the other half plain so it should go somewhat faster. I hope. I’d like to check these off the list! And I think I’ll hang onto this pair myself this time.

Back to plugging away on the Big Secret Project. Can’t blog about it until after the wedding on June 14 but I’m saving up photos and info for when I’m free to post it. Some of the info is over on Ravelry if you’re curious. (And you are not The Bride & Groom!)

So what’s with all the hoopla around the new S&x and the City movie? I don’t get it. But then I never got Seinfeld, South Park, or the Simpsons either. Don’t hate me. I think it’s because I’m too old, too plain, too poor and too married to relate to these women. Some people are talking like this show was such a big influence on their lives, like a milestone in female empowerment or something. Do they realize they’ve only made very-tall-and-pointy-and-super-expensive-shoe-manufacturers very happy? I really don’t get how this is at all feminist. All I can see is that it says you have to be pretty and thin, live in the big city, have lots of money to spend on very nice clothes, have a great job, get it on with a bunch of different guys, whine a lot about how tough your life is and eventually find a rich and powerful man to sweep you off your feet. What is wrong with this picture? Besides, how many woman really could live this lifestyle even if they wanted to? Or is it just a modern day fairy tale? I’d rather go spin, knit and weave, thankyouverymuch. No Fairy Godmothers or Prince Charmings involved. Oh wait...I already have something better than a prince, don’t I? And he has magic kisses! I still can’t spin straw into gold though. I’ve tried.

I'm with you in this Sex in the City stuff.
I call it the Harlequin Romance factor! I can recall my mother reading Harlequin Romance novels as a break away from the drudgery of day to day life of a Saskatoon winter and 4 small kids. ( 1960-1970)
Flash forward to today's society and all our technology and it' a natural that the new escapist method is movies. Every now and then someone actually gets to live a life like that....take Canadian born, 'Autumn' who recently married Queen Elizabeth's eldest grandson.
Women need their fairy tale!

The socks for Stargazer are cute!
Your grandchildren are real cutie patooties!

Susan
PS there are still romance novels out there except they call them bodice rippers now! :)

Haven't seen the movie but will probably enjoy it when it comes out on TV! I watched the series only when it appeared in reruns for the 5th time & found it to be bright, hilarious, can they really DO that?? on TVish, but light & entertaining all at the same time. I wouldn't PAY to see it but enjoy the fun when it's FREE. Do women live that way?? Yup. I know some. But, I'm lost in the 'burbs with my fibre, books & spinning wheel & I don't give a rat's a** about shoes. Ditto for me, loved the socks - you know where MY priorities lie . . .

Guess I'm just more of a Sci-Fi/Fantasy girl than a bodice-ripper type! Give me Firefly or Torchwood any old day. To each her own, yes?

I love the way you talk about stuff like this. Some of the earlier Simpsons are fun ( I wasn't allowed to watch it when it when I was a kid, so I've just caught reruns now and again with my husband), but I too am a science fiction/ fantasy girl, and find myself scratching my head at a lot of things that are supposed to be uproariously clever. My husband and I have talked about this problem of mine, (especially when I am so actively bored by a movie that I prefer to go out and read Midori Snyder in the car until it's over, which is what happened to when we tried to see Be Kind Rewind a couple of weeks ago), and I think it has something to do with satire. To find satire funny, you need an appreciation for (or at least an acquaintance with) the things that are being satirized. And pop culture? I've never really partaken of it. So none of these humorous riffs on nostalgic TV stereotypes or 80's kid culture or current politics do anything for me. Not that I'm a pucker-faced little book snob. You don't need the same kind of shared knowledge to enjoy absurdist humor (Eddie Izzard), or black comedy, or fantasy humor like Buffy (which we discovered and watched in entirety a couple of years ago). I'm especially partial to fantasy/ sci-fi humor for just the same reason I like to read it straight. It makes a whole world for you to enjoy, and then satirizes *itself*. Sorry this is such a treatise! Feel free to erase it if you don't want it hanging around your blog!