I finally found the secret to getting stinky fish fertilizer smell off my hands! The secret is vinegar. I still smelled badly after washing my hands numerous times and even after washing the dishes. I rinsed my hands in a splash of vinegar (white wine vinegar, if you must know!) and it finally took the stink away. Pretty much. Ah, the sweet smell of success.

I went to the Niece-To-Be’s wedding shower on Sunday afternoon. My sweet sister-in-law drove Nana, the Aunties and me and it was quite the hilarious trip, both there and back! The shower was at the bride’s mom’s house in Langley (about an hour’s drive) but with having to pick everyone up and making a few...er, detours, it took much longer. I sat in the back between Nana and Auntie92 and threatened to poke them with my knitting needles if they didn’t behave. Add the somewhat wild driving of my French-Canadian sis-in-law to the old ladies acting like silly little children and it’s amazing we all made it home intact! Good thing I had all that old-lady experience when I used to hang out at my late mommy’s residential care facility. And these ones are only a little dotty! I’m still chuckling.

The shower was fun, though it took awhile for some of the ladies we didn’t know to warm up and speak to us strangers. It might have helped if there was some more formal introductions made because I still don’t know most of their names and relationships. But by the end everyone was chatting away like old friends anyway. It was a traditional kind of bridal shower except that where in my day they would have created a silly hat out of the bows and ribbons, the modern version was a bikini top that the bride ended up having to wear with a grass skirt and lei. Très unbecoming. She was a good sport though and professed to actually being surprised by the party. Luckily there were only a couple of Stupid Party Games and I managed to avoid most of it without being too rude. I absolutely detest and abhor party games, to the point where I usually flat out refuse to play. I think it’s something left over from my childhood but I don’t really have any recollection of major trauma in that regard. Call it a personality quirk. I just don’t play most games. (There are a very few exceptions.)

The presents were pretty darned elaborate, some of which I would consider wedding gifts rather than shower gifts. They really ended up with a very nice haul but everything was zipped out of sight into another room rather quickly so I can’t remember most of it. I coveted the blender since the one I got for my wedding (from my brother-in-law who was then only 15) is a bit the worse for wear after 37 years, but I managed to keep my hands off. However she did appreciate my handmade gift and now I can finally show it off: 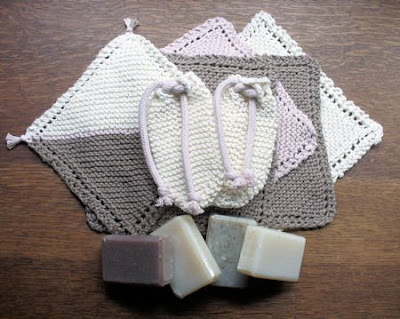 Comments: The tri-coloured one used up all the rest of the yarn. There’s nothing left more than a yard long! The corner tassels happened because there were too many ends to successfully work into the knitting. A good lesson in frugality! The soap socks are a little long but the handmade soap (from Cascadia Soaps) are small bars. I used the kumihimo braid for the ties. 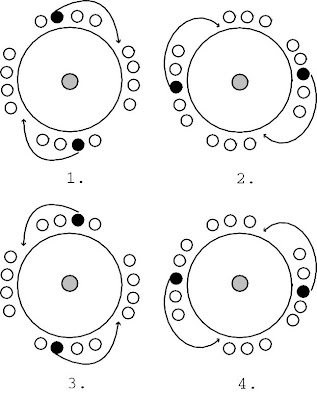 Comments: This is a simple and rhythmic braid to work. It’s actually a 2/2 weave, except of course it’s on the diagonal, and is hollow so it lends itself to adding a core if you want. It’s a very strong and flexible structure. I kept adding more to the counterweight to soften it up a bit so it would knot easily. I started with 19 oz. and ended up with 22 oz. which seems ideal. The yarn untwisted between the counterweight and the bobbin so the individual 2-ply strands lay mostly flat on the mirror. If I wanted to keep the twist in, I would have had to wrap the marudai legs in a towel so the bobbins had something to rest on. The friction would prevent them from untwisting. But it looks just fine flattened in the braid.

I did manage to make a few mistakes in it but was able to cut around them. Does resemble one of our old boat ropes though! All it needs is a core in the centre and to be made from Dacron. Heh. It didn’t work for the Unmentionables but was just fine for the Soap Socks. I had 6 or 8” left over. 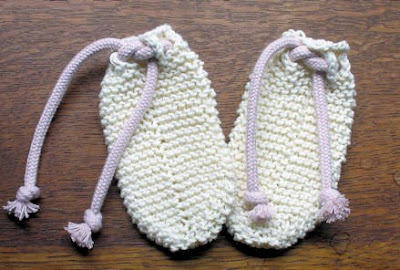 I do hope they can get some use out of these rather than just use them for decoration or hide them in a drawer! I make things to be used and even worn out, though that usually takes awhile. I’m still using placemats I wove in 1985.

Well, speaking of showers, we’re having some today. It’s good to water my garden a little more thoroughly than I have been and it saves me getting out the hose. We got a lot done on the garden this weekend, especially T-Man who worked very hard. I was busy trying to get the Big Secret Project going so wasn’t as much help as I could have been. There’s only a wee bit of the front garden left to finish and some weeding in the veggie paths but otherwise, it’s looking really good. Lots of work but lots of fun too. It helps that I’m feeling well and am able to get out there and dig in. Oops, hope I haven’t jinxed things now.

I think WWKIP day is June 14 this year.

You're right, Marina. It's the Wedding day that's WWKIP. I've edited to fix my boo-boo.

What is WWKIP day Louisa.

Thank You again very much for the gift at the shower. I think I may take photos and post them or email them to if you would like to see what else I got! Talk again soon

You're very welcome, Nicole! No, that's fine - I got the gist of it. It was my fault for not really paying attention anyway. LOL!

WWKIP is World Wide Knit In Public Day. AKA your wedding day. I may bring my knitting there too - or would that be just too rude?