It was pretty weird seeing cracks of daylight through my attic roof yesterday. I should have shut the windows too because the strong winds blew a whole crapload of black grit into the house which had to be vacuumed up. I’m not touching the attics yet which also are full of grit at least until they’re done. When the noise and dust got too bad I went down in the basement and hauled out the Shop-Vac and cleaned half of the basement while listening to podcasts. When T-Man got home we left for a long walk and dinner at the local sushi joint.

Here’s what the house looked like when we got home after they left last evening: 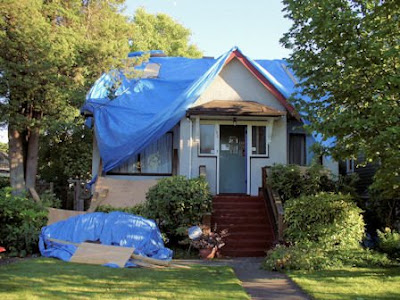 (No, they didn’t leave the front door open — I did.) What you can’t see are the broken rhododendron branches and the flattened plants. They tried to avoid damaging them, just not hard enough. Today they are finishing up that side and cleaning up the rest of the debris. They apparently don’t work weekends and they still have at least 2 more days to go so they won’t be done until Tuesday or Wednesday. The stress goes on.

There is good news though. I found two different things that I was missing. One was my original backup hard-drive that I lost over a year ago! It was…wait for it…buried in yarn in a drawer. One that although I’ve glanced in it, I haven’t rummaged through in all this time. Since then I bought a new back-up drive, one that I like much better. Maybe I’ll use this one as well and have more than one going for absolute security. You can bet I won’t misplace it again anytime soon. I’ve learned my lesson the hard way!

Another thing that I found was a whole ‘nother ball of the black yarn that I need to complete my blanket edging. Now I don’t have to dye anything. Yay! I’m glad I held off on that until I was absolutely sure I’d need it first. The moral of this story is to go hunting through my stashes more often because you never know what I might find that I forgot I need.

Speaking of stashes, I had to go out to Birkeland Bros and buy more wool for tomorrow’s demo at the Maple Ridge Country Fest. {ETA Apparently I'm not capable of reading a calendar. The demo is NEXT week!!} Not that I don’t have any wool (heh! I could supply the store!) but that I can’t get at it in my attic space which is covered in plastic and grit and dirt. My guild has a booth (with Wilfred the Moose, remember him?) at the Country Fest and I (foolishly) volunteered to demonstrate spindle spinning with a hands-on component if anyone is interested in giving it a go. I don’t know how much I’ll be able to concentrate but at least I’ll be somewhere without an air-compressor going. Have I mentioned how much I hate the sound of the air-compressor? Even with my hearing aids off the racket around here is pretty awful. Better than yesterday when they were tearing off the north half of the old roof though. Now that I know they aren’t working tomorrow, I’m almost regretting that I won’t be here to enjoy the silence. But there’s always Sunday. I plan to relax on Sunday. Because on Monday they start on the south half of the roof. Oh joy.

I remember when the landlord was scraping in order to (totally unnecessarily) paint our stucco house. Scritch, scritch, scritch. Something about stucco: every sound like that gets transmitted right through, crystal clear. I left town before they sealed up all the windows with plastic for a week in midsummer and brought on the toxic paint. My husband stayed and slept in the yard.

You will have a lovely roof at the end of it all, though, going by the garage!