Kick 'Em While They're Down

The leaves, that is! It was perfect leaf-kicking weather today. Quite warm and sunny and I even saw one or two people dressed as if it was summer in flip-flops and shorts. Others were wearing fleece or down vests and scarves. I settled for a fleece vest over heavy cotton long-sleeved t-shirt and I was almost too warm. But then we were walking briskly as usual. Why is it that the colder it gets outside, the warmer they keep temperatures inside the stores? Or maybe it’s just the contrast. Anyway I was roasting in the magazine store.

Only one magazine available today, the November/December issue of Handwoven. There was a tote bag on the cover that totally looked like it was a fulled (felted) knit in entrelac or mitred diamonds but it was actually woven in little squares on a pin-loom which were then stitched together into a bag and fulled. It’s final purpose is for a loom-bench storage bag. Also in the magazine are articles on choosing a loom and which shuttles are best for what. I particularly liked the project by Gudrun Polak, an old acquaintance of mine, of a tabletwoven necklace that curls and another by Amy Abbot on inkle weaving a pincushion necklace. It seems that they are focusing more on beginner level weaving or weaving with simpler equipment but there are also projects for 8-shaft echo weave and advancing twills. I think it’s difficult if not impossible to please all of the weavers all of the time, but this issue must hit a good cross-section. Plus I really like the redesigned layout.

What else have I been up to? Yesterday we went to the nursery and bought some flowering kale and winter pansies to replant the deck pots. The coleus had been swiftly dropping leaves all over the place so I knew it was only a matter of days before they would be toast. I’m not going to try to root cuttings of them this year since I had better luck growing them from seed in the spring. I can’t get the more exciting varieties in seeds but I got enough to keep me happy and they grew very large. I kept the rampant lobelia in the pots and it will be fine as long as a hard frost doesn’t hit and swapped the coleus for a single kale (purple and white ones) surrounded by orange and purple pansies. I put all the plastic pots down on the lower deck and brought the ceramic ones with my Amber Waves heucheras up to the top deck for a bit more protection. They did very well this summer and I want to keep them well. Besides I love the bronzy colours of their leaves. So far the geraniums are surviving in the hanging pots but I tucked some pansies in there too. I also got a pretty rust-coloured garden mum for the front door basket and it’s currently sharing the space with my toad-witch doll (made by my sister The Nurse) and my two needlefelted pumpkin heads in a festive arrangement. Now T needs to carve my single giant zucchini into ghosts and we’re ready for Halloween.

I got a wee bit further on the Purple Ruffles Socks for Princess Pink: 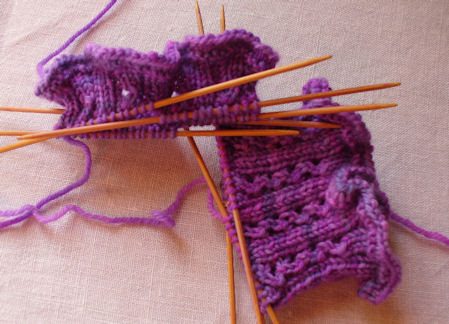 So far they’re pretty cute. Not a mindless knit however which brings the total of not-so-mindless knit projects on the needles up to three. I may have to start something mindless just to have something to do when I’m otherwise occupied and can’t watch what I’m doing. I’ll try to hold off though until I finish at least one current project. Or none of them will get done anytime soon.

Then there’s the shibori weaving which is going very slowly and the Journal which is still under a pile of books giving it a good press. I haven’t started writing anything in it yet. I’m not really afraid of it, just otherwise occupied. Too many things going on right now and nothing nearing completion at all! I’ve been trying to enjoy the lovely weather and we even spent some time sitting reading in the sun on the deck today. And it’s nearly November! However we did have a bit of light frost this morning so it’s not as if it’s been terribly unseasonal.