A Poke In The Arm

Yep, I got my flu shot today. I mean – what could I do? I’ve already had 2 colds in the last while, one light and one nasty. Everybody thinks I’m always sick so I must be sick way too much! I think I just bitch about it more than most, but I digress. Anyway, I went to see my cute doc and got poked. (Stop that! With a needle.) I hope that it will keep me from getting the flu at all this winter but that might be asking too much. At the very least I hope it keeps whatever I do get down to a dull roar. I do NOT want to feel crappy all winter this time around. T-Man has been debating about getting his shot. They actually come to his work and do it so he doesn’t even have to go anywhere or pay $25 like I did. (I get it back from his extended medical insurance though.) He just doesn’t really believe it works. I say judging by how lousy he felt when he caught my last cold, it might be in his best interest to go for it. Might even keep him from bringing the flu home and sharing it with me, the Damselfly-Hermit.

I’ve been sticking with the Bronze Ribbon Scarf and am nearly at the halfway point because I’ve nearly come to the end of the first skein of Louet Euroflax linen yarn. It’s over a metre long already but I like long scarves that you can wrap around your neck several times. No point in stopping before I’ve used up both skeins.

What else? I got an odd request from T’s Auntie92. She asked at Thanksgiving if I would take the hand ends off a pair of very long (up to the shoulder) commercially machine-knit gloves that apparently came with a cap-sleeved dress she planned to wear for Christmas. She wanted her hands free and her arms warm. I thought it would be relatively easy: clip the yarn above the ribbing towards the thumb, rip back to the where the rib ended, pick up the stitches on fine dpns and bind off in k2/p2 rib. Not so easy. It was a royal PITA to pick apart the stitches where the glove was casually picked up from the arm which, unbeknownst to me, was knit flat and joined into a tube. I spent ages clipping yarn and pulling the loops out of the stitches that I needed to place on the needles. Then I had to join new yarn, salvaged from one of the gloves to bind it off. The yarn was acrylic, 3ply and splitty making it even harder to deal with. I eventually got it done but a simple job took over 2 hours to complete. With my magnifier lamp the most important tool along with a fine crochet hook. Now Auntie92 says she’s not going to Christmas Dinner at The Ninja and The White Lady’s house because her sister, Auntie90 doesn’t want to go. Oy. And I still have the sleeves here.

I need to get some work done in my new Studio Journal to keep up with the class lessons. We also have to go vote today. Can you say “Voter Fatigue”? In the space of a month we will have had to vote in federal, provincial (by-election) and civic elections all the while trying to keep half an ear cocked on what’s going on to the south of our border. Sheesh. Democracy is hard work! This particular little exercise is because our left-wing provincial MLA has decided that being in opposition in Victoria isn’t good enough and wants to run for Vancouver mayor instead. He’d better watch that he’s not out of public office entirely like the guy who caused the other local by-election. He aimed to go to Ottawa as an MP but lost his bid in the federal election. Now he’s out of his provincial seat too. Heh. Somebody should have told him that a gay Conservative just might not fit well in the Harper government. Coulda been interesting to watch though. But I’m tired of politics.

To distract you, here’s some pretty leaves that are currently my Bluet’s wallpaper. These are white ash from the trees that line the street one over from me. I can see them from my house and I love them this time of year. The undersides of the leaves are pale pastels, a very different colour from the tops with their yellow to burgundy. They are gigantic trees and not indigenous to the west coast. 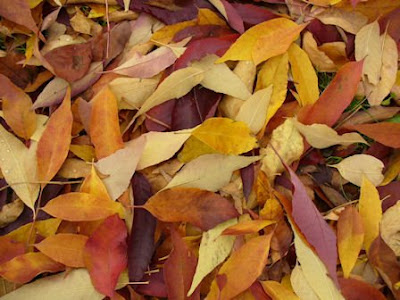 Beautiful leaves - my tomatoes were from the UK Heritage Seed Library and are called Mini Orange. they are a bit bigger than Mini in reality and are very tasty:)