Two steps forward and one back, aka The Damselfly Shuffle. I’m about 1/2 finished my guild roster booklet but I seem to be slipping off to other things much too often. Like washing dishes, making soup out of a ham bone and sweeping the leaves off the deck. Again. This morning it looked like this: 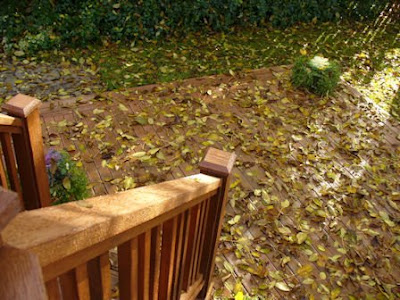 Even though I swept it all off yesterday. Leaf Season is nearly over here (sniff!) and the rain and wind we’ve been having on and off are hurrying things along. Today was lovely and sunny but I was stuck working on the computer most of the day. But then I couldn’t help myself – I had to go outside. So sweeping the deck was my excuse for a bit of sunshine. Imagine about twice that many walnut leaves before I got out there.

I did manage to see the lovely video from Knitting Daily TV with Eunny Jang and Nancy Bush knitting Estonian lace nupps. Here’s a link if you’re not on Knitting Daily’s email list. (If not, why not? It’s full of great info.) Apparently they’re called “noo-ps” not “nuh-ps”! Who knew? Unless you can speak Estonian, that is. Unfortunately most of us have already figured out the knit-loose trick to getting nice nupps while working on the Swallowtail Shawl. Or one of the several other methods invented by frustrated knitters. Helpful for those who haven’t indulged yet however.

Nice to watch Nancy knit too. I’d forgotten how awkward English style can seem especially when there are so many yo’s involved. However, Nancy can knit lovely stuff and lots of it so I guess the method is not as important as the results. Of course, my excuse is that I’m even more awkward with English knitting because I never could throw the yarn over the needle without letting go of the needle first. I’m still slow with Continental which I’ve been using for about 30 years but it uses much less hand and arm movements which allows me to knit longer. I always have to remember how to do English when knitting colourwork where I knit with one colour in my right hand and the other in my left. Perhaps that’s why I turn to mosaic (slip stitch) patterning first before considering fair isle. Although the look of each is somewhat different and it depends on what you’re after. The advantages of mosaic are you’re only working with one yarn at a time and there’s no long floats on the back. The disadvantages are that it takes some knowledge to follow the charts and it’s more difficult to design your own patterns because of distinct parameters that must be followed for it to work. Ya wins some; ya loses some. But over the years I’ve knit a lot more mosaic than fair isle. And very very little intarsia since the very elaborate Chicken Sweater I made for The Ninja when he was small – just before we found out he’s allergic to wool. Wish I still had that sweater. It was all handspun and hand-dyed back when I first learned how. I thought it was pretty amazing. But perhaps it’s better that it lives on only in my memory.

Good morning, Here in Chesapeake VA we are starting the battle of the leaves also! Not a lot of color, but every now and then one that is a-maz-ing!!
I injoy reading your blog, and the pics too. I am attempting to get one up and running, but live in a area that only has DIALUP...gasp..sob....which make everything just too slow...
I see you are working on a Water bottle Cozy...I am a primitive knitter do you have a pattern? or is it woven...humm, maybe that would be a answer...
Holly Fox

Thanks for your kind words, Holly! I do love this blog. It keeps me on track - or gives me an excuse to procrastinate. Whichever!

I haven't actually started the cosy yet. It's a future project I've had in mind. I was going to use the Sipp-A-Roo free pattern by Lynn Hershberger available on Ravelry. (You are on Ravelry, aren't you? Get in line now if you're not! It's the best place to hang out, ask questions, learn stuff and get more ideas of things to make than you can stand!)