Quietly In The Rain

It’s been dumping down rain on us for several days in a row. Classic November weather which we haven’t really seen much of up until now. Unfortunately the house next door has been having problems with the sump pump not working. The poor downstairs tenants have had some water in their apartment and right now there’s a hose going out to the back alley with a temporary pump in place to keep them dry. Not good. I knew that house was going to have problems. Remember when I watched the entire renovation process? Corners were cut that are now coming back to haunt the new owners. It’s really unfortunate. I had hoped the building inspectors would have caught most of the problems but I guess some things aren’t immediately obvious. My little old house, on the other hand, is managing our inclement November weather quite nicely with our new roof on. No leaks anyplace…she says carefully, touching wood.

I’ve just started my seasonal “un-shopping” and will be staying away from the stores as much as possible until, oh, sometime in January. Masses of crazed shoppers combined with lousy wet dark weather is not my idea of a good time. I may have to get groceries occasionally though so it’s not like I can hunker down and never venture out at all. However, it will be on foot and close to home unless the weather cooperates enough to allow a longer walk. The elliptical trainer will get a workout in the meantime.

So the crafty stuff is still ongoing as always. I’m halfway through the first pair of Frankensocks and plan to go right onto the second pair the minute they’re done. I have been very bad and haven’t done much more with my art journaling. I’m kind of waiting for the rest of my study group when we start the lessons in January. Yup, that’s my excuse and I’m stickin’ to it. As far as making it a daily habit – not so much. I doubt that I will ever get into that kind of art-making every day. I never could keep any kind of journal at all until I started blogging. Somehow this has engaged me on at least a semi-daily basis where nothing else did. The exercises that we got in Sharon’s class look to be great fun though. I don’t think I’ve quite figured out how to turn them into the kind of crafts that I prefer to do. Maybe after I’ve really played with the ideas for awhile. Right now I seem to have enough things to keep me occupied.

I did play with an online program called The Scribbler. It's really fun but I'm not sure what to do with the pictures after you've made them. You have to use PrintScreen or something like the screen capture in Paint Shop Pro to bring the images into your computer since there is no print function. In the first image I drew a simple leaf shape. In the second I paused the scribble and added another outline around the first one. Kinda interesting, no? 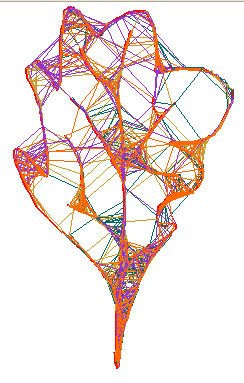 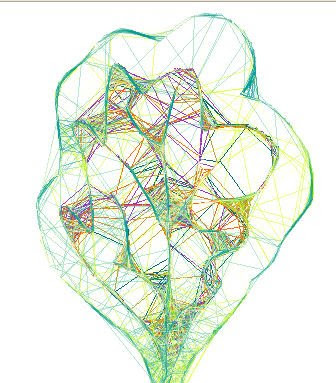