Contentment: A Feeling of Calm Satisfaction

I’m beginning a dialog with myself about my inspirational word for last year “contentment” and whether or not I’ve realized it. I think I have, but it’s been an interesting year. A little too interesting on occasions!

I got quite a few things accomplished including knitting 17 pairs of socks (so far anyway – and there’s still another pair nearly done) and 3 pairs of gloves, my attics cleaned out (except one last one that needs some remedial work), lots of dyeing with my home-grown dyestuff, the Circus blanket woven, got our staircase re-carpeted, the house re-roofed, new stone pathways in the veggie garden, and the deck and railings refinished. It feels good having some stuff that has been waiting a long time finally completed.

On the negative side we lost both our elderly cats within a few weeks of each other. I miss them a lot but now I have several less chores to do – except the dustbunnies are still alive and growing well even without the extra cat hair. Go figure. And my health didn’t do very well this year although it’s nothing truly serious. If it was more serious I would probably work a lot harder to find a solution, assuming there is one. I keep waiting for it all to go away by itself. I’ve had a fairly good energy level though especially through the later spring and summer. I got lots of exercise in the garden and walking everywhere. We’ve nearly stopped buying groceries using the car entirely except for the big heavy stuff.

Things are not quite as organized around here as I was hoping they would be by now. I have up-to-date inventories of my publications (books, magazines, notebooks etc.) and my fibre and fabric stashes but I haven’t finished the equipment and tools inventory and barely started on the yarns. Part of me wants to get rid of superfluous stuff and the other part wants to hold onto everything just in case. So far neither side has won because I haven’t done anything with it all except ignore it, dust it, or move the piles around.

Emotionally I’m in a very good place. My relationships are solid and positive and I get a lot of pleasure from my family time. I have lots of things to occupy my interest and never feel boredom. More time for everything would be good though! The days go by too fast sometimes. (Yeah, I know. So what else is new?) We had a lovely long holiday in September that left us both relaxed and with great memories. So have I got to the contentment I was looking for? I think so. However, it could all be set topsy-turvy if T-Man gets “retired” before he’s ready for it. Or as he puts it, we’ll be finding the “new normal”. I bet a lot of people are in that boat.

Speaking of which, I was considering what larger purchases I would like to have quick before we find ourselves living on a fixed income. This weekend I managed to luck out and find someone who was selling a lightly-used Patrick Green Deb’s Delicate Deluxe drum carder with both fur and production drums. Just what I wanted but was reluctant to put out the cash for a new one. My original drum carder is from the 1970’s and has coarse carding cloth that works fine for the Romney wool that was a staple of my early spinning days, but I would love to be able to blend finer fibres without creating neppy messes. Or without using hand-cards, which I have in several finer sizes up to cotton cards. Hand-carding is ok for smaller amounts but not for any volume. It’s too hard on my neck and arms. This is what the soon-to-be-my Deb looks like: 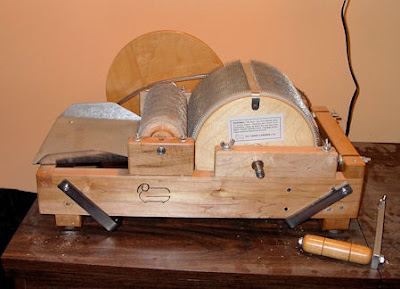 I think $650 is a reasonable price to pay for it. Now I have to find out how much it’s going to cost to mail it to me from Vancouver Island. At least she still has the original boxes.

So I’ve already found a word to aspire to for next year. Yeah, I know there’s still a whole month yet. But it’s a busy one and I wanted to be all ready to go when 2009 begins!

It has some potential as a theme to concentrate on for a year, doncha think? I also played with Scribbler some more: 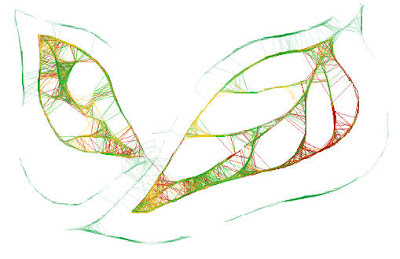 Yes, leaves are an important image for me. I like to play with them often. Maybe a secondary theme?