Dreaming Of A White Christmas 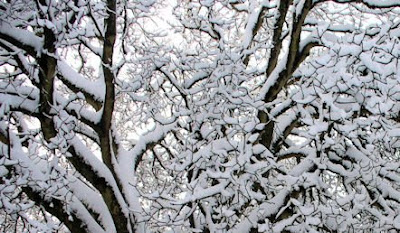 OK! I get it already, as Princess Pink would say. It’s TOO white out there now. It can stop! We’ve got a good foot or more on top of the ice from last week. The city has nearly ground to a complete halt and neighbours are helping neighbours get their cars unstuck. Quite the scene! It snowed all day yesterday and we, crazy folks that we are, took the old VW van and picked up Nana and drove all the way out to Surrey in the mess. The things we will go through for a turkey dinner with the immediate family. Really. We got a bit stuck once or twice and slippity-slid some here and there but T-Man was very careful and we made it both ways. The Ninja and his family had it a bit easier since they live closer and had less snow at their house.

Milady Daughter outdid herself with the cooking and Milord Son-In-Law with the appies. (He might not be able to cook but he can shop at Costco!) We brought T’s wine and all was merry and bright. After dinner, everyone who wanted to got a chance to play with the Wii and the big screen TV. Even Nana loved the bowling! T got skunked boxing with Milord SIL though. (You can tell who’s had the practice!) And I can’t get the “Bella Dancerella” song out of my head from Princess Pink’s DVD (royal scepter with light-up tip included): 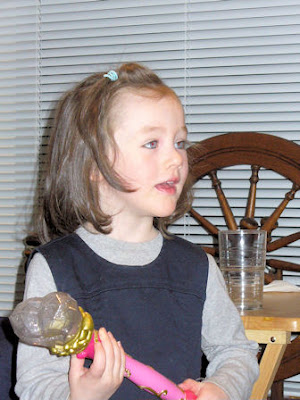 While Stargazer terrorized everyone with his toy shark: 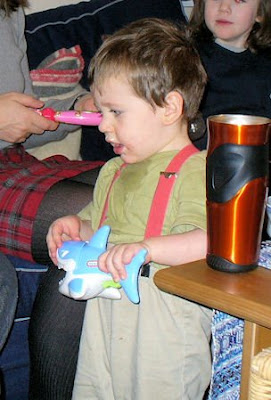 It was so much fun! The Solstice was well and truly celebrated and the sun welcomed back.

A small group is so much easier to fully enjoy. The Big One comes next at The Ninja and The White Lady’s on Christmas Day. It’s gonna be wonderful chaos! We’re supposed to even have a bit more snow by then. Urgh! BTW White Christmases are very rare around here. I can only remember maybe a handful or so in my life and most of those were only a dusting. A full dump doesn’t happen often and then usually in January or February. I really do like snow, but this is just a bit much. At least T is off work this week so he can do the shoveling. Heh.

Thankfully I just spent a small fortune for a good set of winter tires on our van so we should be able to make it on Christmas Day regardless as to what it's doing.

My parents however... Coming from Mission, we'll have to see how they make out. Will probably recommend my Dad take the Lougheed most of the way and see how he makes out.