I Am Not A Grinch

In fact, I’ve been very good this year and have been resisting my usual Holiday urge to rant about the stupidity of the whole Silly Season thing. Well, not too much anyhow. I actually have a wreath (with a bunny) on my back door and T-Man put the lights up on both back and front of the house. I loves me the lights! That and the visiting and the food are my favourite parts of this time of year. I also put up my wonderfully tacky tree that my birth mom made from broken wine bottles and old costume jewelry, all glued to a red velvet background in a speckle-painted frame with lights poking through the backing. She made one awhile back for each of us kids. (Sorry, Mother! But it is totally tacky and I love it.) I even put up the tree-shaped advent calendar that I made when my kids were tiny. The hand-stitched felt decorations button on with mother-of-pearl buttons that came from T-Man’s granny’s collection. Yes, it’s also tacky – but a family tradition more than 30 years old now. Along with Black Jack Bear in his Santa beard and hat in the basket on the front door with the felt pears, I think that’s it for decorating this year. Since we still haven’t cleaned out the last attic space, I can’t get in easily to wrestle out anything else. I would have liked my solstice sun, moon and stars decorations but they’re too far buried. Good enough is good enough. Martha I ain’t.

Instead I spent half the day yesterday attempting to reverse-engineer the Springtime in Philadelphia pattern (that I renamed my Earthly Beret) to fit the fingerless mitts. I’ve frogged back to the ribbing twice because it just doesn’t look right. I’m working in the opposite direction to the way the beret was knit and the angles of the decreases and yo’s are wrong no matter what way I knit them. Just shows you that you can’t simply turn the chart upside down and get the same pattern exactly. I did some research using my precious copy of Knitting Lace by Susanna E. Lewis (Taunton, 1992) to see if I could figure out what went wrong. Besides all the charted patterns from a vintage lace sampler, this book has a whole section on designing and charting lace. It’s fabulously helpful and I wonder why it hasn’t been reprinted yet. Original copies are currently listed for as much as $250! Yipes! The story as I know it is that Taunton didn’t want to reprint (apparently this type of important documentation is not a priority), the copyright reverted to the Brooklyn Museum (who owns the original sampler) and at least 2 years ago, Meg Swansen was in negotiations to get the thing reprinted through her Schoolhouse Press. Obviously didn’t happen - yet. Unfortunate. Meanwhile I guard my copy with trained attack dust bunnies. So no attempts at pinching it. Besides you’d never find it in the forest of books in my studio without a map.

But I digress. The problem I seem to be having is with the heavy line of decreases here: 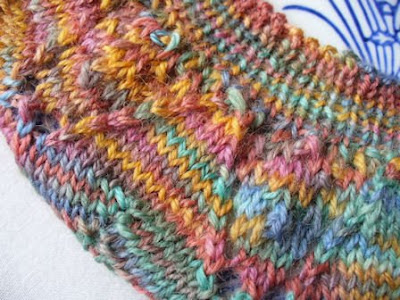 See how they’re on the “leaf” side of the lacey triangle? When I knit the pattern in reverse it makes them disappear, blending into the yo line instead of defining it. As far as I can make out you can’t change that fact because a strong diagonal line of decreases can only appear beneath the yo’s in the direction you are knitting. I can emphasize the line on the upper edge of the lacey triangle instead by moving the decreases to that side of the yo’s. So it still won’t look the same but it might be better. The only way to do make it truly identical would be to knit the mitt from the top to the wrist. That would make the thumb gusset a bit tricky to cast on and decrease (would be like adding sleeves to a bottom-up circular sweater) and I would have to rip out most of the ribbing I’ve already knit and start again. Sigh.

I thought this would be easier than it’s turning out to be! Silly me. So not wanting to begin again at the top, I opted for “similar” as opposed to “matching”. We’ll see what it looks like when I knit it up again. The frog pond awaits if I’m still not happy. That’s the nice thing with knitting – you can undo it faster than you did it in the first place. Not too many things in life allow for such an easy do-over. Unfortunately that makes it all too easy to be picky. At least until my patience runs out. I'll let you know how it goes.

Still haven’t got a photo of the Frankensocks. It took a whole 24 hours-plus for them to dry even on the warm bathroom counter. There’s a hot air vent under there in just the perfect spot to warm the towels. However that assumes that one hasn’t set the house temp down so low the furnace rarely kicks in! It’s not currently raining so I hope things will brighten up by this afternoon.