Home Where The Buffalo Roam

I’ve been trying to get back on track with my crafty stuff after focussing so closely on The Talk for so long. After I dug out all the fibre samples from the stash (aka Attic Insulation) I got excited about all the yummy stuff in there. I also promised, perhaps foolishly, a scarf for the Guild’s 75th Anniversary display at the Seymour Art Gallery. If it’s knitted, it must also be handspun. So I dug out the tiny bags (only a couple of ounces total) of the bison and put the lace flyer on Tori (the Louet Victoria wheel). I used the 13:1 whorl (second-smallest) so it wasn’t going too fast and creating wire. It was surprisingly difficult getting started! I’m kind of out of practise and this short (short!) fuzzy stuff got away from me a couple of times. Once it did, it was hard to get it started again because it kept breaking. I learned to put lots more twist in it before even trying to join in the fibre source again. Here’s the day’s results: 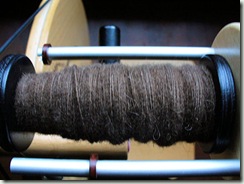 You’ll notice how I wasn’t being as careful to load the bobbin evenly as I should. Bad damselfly! Out-of-practise-damselfly. I didn’t want to stop in case I couldn’t get started again. I have another bobbin’s worth to go however, so there’s lots more chance for improvement. I should have it just about right by the time I’m finished! I have no idea what the yardage will finally be after plying but if there’s enough I plan to knit a lace triangle, exact pattern TBA. Yes, I know I haven’t finished either the socks or the green cardi yet. So? I have an actual deadline for the scarf: April 15. Deadlines count first.

It was really enjoyable spinning out on the deck in the sunshine yesterday afternoon. I had to wear a hat again to keep the sun out of my eyes! (This time it was my own hat, not T-Man’s.) However today looks more like February: cloudy, with rain forecast for later. I’ll probably be walking in the rain tomorrow morning when I have to take my hearing aids to the audiologist for repair. The left one has developed what I think is the same problem as the right one did a year or so ago. It still works but it’s too quiet as if one program is broken. Last time I think it was a broken wire and after they replaced a piece (for $30) it’s been working fine since. Hopefully it won’t be any more expensive than that. I do try to take good care of my “ears”! Anyhow, I need to get some tea while I’m at the mall. Mmmm…fresh Murchie’s #22 tea. Slurp.

Heading for the teapot…