Not Only Red But Gold Too!

Man, was it loud celebrations last night for Canada’s first gold medal of the Games! There was music and drumming and yelling “Go Canada Go”. I could hear it all the way from downtown while lying in bed without my hearing aids in. I was just dozing off when the fireworks woke me up and they went on and on. I’ve had enough trouble sleeping through the constant helicopters and planes flying overhead as it is. This place is Party Central like I’ve never seen it before!

We managed to catch the gold medal run in freestyle moguls on TV – more by accident than design. Ouch! Crazy game. Glad I’m not his mom, just saying. I’d be proud but worrying myself silly at the same time. At least the ones who skate around in circles aren’t playing with their lives the way some of these athletes are. The older I get, the more I value my life, health and wellbeing. But then I’ve never been good at any sport so what do I know? I’m not much on competition personally. But I can get excited for the winners and feel great sympathy for the losers anyhow. Except for the guy skiing for Australia who lost to Alex. He’s an ex-local who brazenly creates computer malware. My comment: pfffttthhhh!

Meanwhile, I gave it a big push yesterday and I’m about 3/4 of the way done the slides for my talk. It’s actually been kind of fun putting them together. In contrast to my usual care, I’m shamelessly “borrowing” most of the images off the web using my google-fu skillz. I figure it’s for educational purposes, a one-time only thing. Plus I’m not planning to publish or profit from it, so nobody’s really being ripped off. It takes far too much time to find what I need copyright-free or to ask permissions for each image – if that was even possible. I do have a few of my own photos and a couple that were kindly sent to me by Lesley Prior, UK breeder of fine cashmere and angora goats plus rare Bowmont sheep. This is shaping up to be pretty interesting, if I do say so myself.

I’m really not much of a public speaker (though I can talk your ear off one-to-one!), but I can write ok so I plan to pretty much read my talk rather than wing it. Fortunately I’m not really nervous because this is just like hanging with a group of friends and I’ll know most of the audience – some of them for more than 20 years. And I’ve gained some confidence in myself over the years. There was a time when I had trouble voicing my name to a small group of strangers. I credit my weavers guild for providing me with a friendly, warm and comfortable space in which to grow. I’ve been a Member for a full one-third of the GVWSG’s 75 years of existence and there are lots who’ve been there longer than I have! It’s a great bunch of fibre folks.

So because I haven’t had time to take any photos myself lately, here’s a hint of where I’d rather be right now: 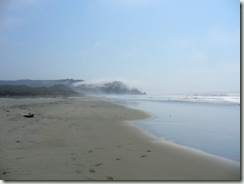