If you’ll remember, I was all fired up about sewing myself some new clothes. Here’s the dress pattern puzzle I created so far: 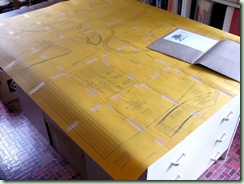 Doesn’t look much like anything wearable yet, does it? I now am in desperate need of a dress form because this (and every other pattern) needs some serious fitting work. It’s much easier to create something that not only fits but flatters if you have a form to put it on. Commercial dress forms are both expensive and not shaped at all like me, so I had decided ages ago to make one myself.

I think it was nearly a year ago that we bought some paper tape from the butcher on Granville Island to make said dress form. I kept putting it off hoping that I’d lose a little weight first. Hah-hah-hah!!! Right. Not so much. Then I waited for the right time to capture T-Man’s assistance. Being the model, I couldn’t help much myself so I had to depend on an Able Assistant. So on Saturday it was raining and we didn’t have anything immediate planned so I decided it was a good day to get started. I dressed in underwear and a plastic garbage bag, put on my soft plastic clogs, got out the tape, scissors, warm water, sponge and towel and let T tie me up! Little did I know. The directions I had saved (which I can’t point you to since the original webpage seems to have vanished) that we decided to follow – sort of – said it took about an hour. HAH! Five stinkin’ hours on my feet unable to sit or move much at all! Luckily I’m pretty fit, but at the end I was impatiently awaiting my freedom and when I could move again, collapsed in hysterical laughter. I was cold and my hip was a bit sore so I was very glad to recline in bed under the covers for the next several hours afterward. We ordered pizza for dinner since neither of us had any energy left by that point.

I have to admit that some of the time standing around we were not actively taping but cutting more paper tape strips, eating a snack, having a sip of tea etc. All very necessary, believe me. And we still never got more than 3 or 4 rather wonky layers done. Meet my intimate friend, Debbie Double:

She definitely needs some more work before she’s done. Since you add the layers on top of yourself, the measurements are somewhat larger than they should be. Plus, my Able Assistant didn’t realise that the neck and underarms should be at least symmetrical. He did manage to make a very acceptable stand out of an old handrail before he left on a business trip today though. Now I get to fiddle and fuss by myself until I’m happy with ol’ Deb. It takes time because I can’t get things too wet or it starts to collapse, so parts need to dry overnight before going on. She’s very lightweight but quite sturdy, if a bit rough.

The reason we went with paper tape, even though it needs to be moistened so it’s slower to work with, was that we thought the results would be much better than the more common duct tape method. Duct tape slumps out of shape and is much more flexible so needs careful stuffing. Hot weather softens it too. I’ve also seen plastic packing tape used but it suffers from some of the same problems and I would be concerned that the glue would dry out eventually. Unfortunately with our method, T wasn’t able to be as smooth in application towards the end as he could have been. We were both getting too tired. And I wriggled too much! Plus the form collapsed a bit when we took it off and we didn’t have the energy to prop it well before it dried. We only hung it from a hanger with some fiberfill padding. But I think it’s better than the plain wire hanger I’ve been using as a dress stand for the last 45 years anyhow! It’ll be fine.

I have to admit it’s kind of odd to have your aging anatomy where it’s a separate entity from you. You don’t really look at yourself from all sides. T says it looks pretty much like I actually do though. Sigh. He oughta know! Guess I had better follow his example and learn to love her just the way she is.

Meanwhile I’ve been ordering more patterns. Since there aren’t any fabric stores that I can get to without taking transit or depending on T to chauffeur, it’s nearly as easy to order online. Plus there was a sale this weekend on Butterick, McCall’s and Vogue patterns for US$3.99 each so I took advantage. Postage is only a wee bit more than bus fare and they mail from Canada. Plus it won’t happen that I choose a pattern I really like and then find that they don’t have one available in-store in my size which happens often. Shopping at home has it’s conveniences. A little too convenient sometimes. The downside is I have to wait for delivery.

Off to go play with Debbie some more. The waist is still somewhat wider than I am. And she needs her neck and shoulders fixed and the back seam (where I escaped) reinforced. Then she needs to go on her stand and get stuffed and covered. Lots of work still to go.

Yep, definitely lots of work! But it will be worth it to have a form that more closely resembles me than commercial ones do. And she already looks much better! You'll see.