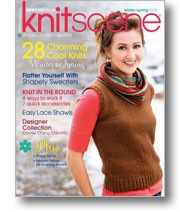 I was hunting all over for the most recent (Winter/Spring 2010) issue of Interweave’s KnitScene (Rav link) and couldn’t find one stinkin’ copy. I obviously didn’t start looking early enough. It’s no longer available to order on the website either – out of print. It’s a very popular issue, filled with great designs, and my favourite magazine shop which we visit weekly never even got it in stock. Boo-hoo.

Anyhow luckily for me, my knit-buddy Chelle was kind enough to loan me her copy. So at least I can read it! Now I’m totally smitten with the Tudor Henley. And the Helleborus Yoke. And the Conifer shawl (for which there’s an errata available). And…and…I’m going to have to give the magazine back. I would totally buy a copy if there was one to buy. (Shhh…don’t tell the copyright cops. I have a scanner and I know how to use it.)

Moving right along, the wool and Zephyr wool/silk skein that I dyed yesterday is dry: 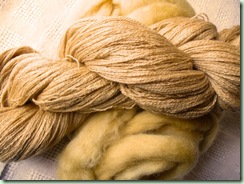 Not sure how accurate the colours are on the screen but the skein is a soft gold (it had an little swim in an ammonia modifier bath) and the wool is brighter yellow. I still couldn’t get myself to throw out the rest of the dyebath so I sealed it in a canning jar. Probably it will be tossed eventually! Only a light yellow is left in it now. At least I managed to put the extracted root bits in the compost! Otherwise I’d be trying to get more colour out of the poor things. Now I want to spin some multicoloured yarn out of all the wool. With long colour changes.

I sorted out most of the fleeces for the upcoming Anne Field workshop that I’ll be taking. My study smells like a sheep barn and I need to go buy more baggies! I was asked to provide the wool and it has been a much more difficult job than I expected. Anne asked for fine, medium and coarse fleece at 100g for each participant (13 packets total). Still not sure I got it right but too bad! Plus some wool sliver which was easy-peasy. Just walk down the 3 blocks to Birkeland Bros. Then they tell me they also need drumcarders and a spinning wheel for Anne to use. I volunteered both of my carders (since the guild ones are frankly crap) but don’t really have a suitable wheel to spare. I asked if Birkeland Bros would be willing to lend a Joy or Traditional and they will – in trade for me getting some of Anne’s books signed for them! Now I have to track somebody down to give me, my own gear, plus all of this stuff, a ride out to Capilano University in North Van. Not like I can take it on the bus, yo’. And folks wonder why I’m getting un-enamoured with taking workshops no matter how incredible the instructor or fascinating the subject. Too much flippin’ stress! This had better be a worthwhile exercise. Just sayin’.

I also gave in to startitis and began a Super-Secret Project for Alien Baby. No news because it’s a secret, silly! Hope it doesn’t cause me to give up on the Happy Legs tights. I started the second leg and have 5 or 6” done already. It’ll soon catch up to the first leg.

What else. It’s been windy and cold so no more planting outside until it warms up. I think I should have made my broccoli some little sweaters but everything else seems to be taking it in stride. I swear it was warmer in January! Squashes and the first of the Chinese woad are popping up under the lights so the temp had better improve darn quick before I run out of places to put things.

Oh, and I haven’t discussed this for awhile – the psoriasis is finally starting to behave itself. Not perfect by any stretch but a lot better than it’s been for the past year. I’m down to a less complex regimen of ointments now and I have another appointment with Dr. Serious Dermatologist in June. So nice to finally feel like we’re getting somewhere with it after so long. However, I’d hate to have a total of what this would have cost if T-Man didn’t have a good extended medical plan at work that pays 80%. Just one prescription alone cost nearly $100. And there are 5 more medications, not including several others that I had to discontinue. Oy.