I was again playing with my Backyard Dyes this weekend. First it was rhubarb, both leaf and root. Again, I used the leaves from when I picked rhubarb for sauce to mordant both some Louet Gems superwash wool and some more of my quickly-dwindling supply of crossbred wool sliver. Then I soaked overnight about 50g of chopped and dried rhubarb root that I got a couple of years ago when I divided my old rhubarb plants. It has a very strong yellow dye that just keeps coming out! According to Jenny Dean, rhubarb root doesn’t need a mordant to be fast so I kept part of the dyebath separate to see what colours I would get without the rhubarb leaf underneath. I also used both baths again for lighter colours. 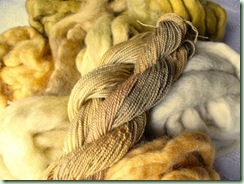 I ended up with lots of subtly different shades of yellow and gold. The superwash took the dye quite unevenly so I played up one skein that had no rhubarb leaf mordant (photo centre, top of the pile) by dipping each of four corners of the skein in copper (brass), acetic acid (bright gold), iron (olive green), and ammonia (red-gold) modifiers. The modifications weren’t quite as intense as I expected, particularly the ammonia (alkaline) one which only shifted the colour slightly toward orange.

The colours were more clear without the rhubarb leaf base. There was a distinct green overtone in the pot with the wool that had been mordanted in it. Even wool with no mordant came out more gold in that pot so the rhubarb leaf definitely had an effect. The superwash wool seemed duller though in either pot and the brightest and prettiest wool was the no mordant/rhubarb root only/ammonia modified piece (bottom right in the photo). The lightest piece (just above) was rhubarb leaf only, no root.

Then I couldn’t stop so went out with the gardening gloves and the pruning shears and collected a bucket full of blackberry leaves and shoots from the back hedge. My sources say that tannin is the main colourant here. Even though everyone thinks of the berries as being dye, they are definitely not colourfast! An older sample I have in a book I inherited is now light brown, not the purple it once was. And that sample was never washed and rarely ever saw light either. Fugitive colour for sure. Just eat the berries. However the abundant shoots and leaves have a useful purpose.

I chopped it all up (carefully! ouch!), brought it to a simmer in water, cooked it for awhile then turned it off and left it to stew overnight. Sunday morning I removed the blackberry bits (carefully! still prickly!) and divided out some of the dye into a separate pot. I put the rest of the wool that had been mordanted in rhubarb leaf in one pot and some unmordanted in the other. The wool with no mordant came out of the blackberry pot a warm cream colour. A 5-minute dip in iron modifier and it was a darker neutral gray. The superwash yarn came out much darker than the wool roving. I ended up saving most of the soft cream piece of wool roving out of the iron just because I liked the colour the way it was. Though the gray was very nice too.

In the other pot, I got a really odd cream and grayed-purple variegated effect on the rhubarb leaf-mordanted wool. The first batch that went in was as expected somewhat darker than the second batch that I added later. I used an iron modifier on most of the wool from this pot, except for samples, because the unmodified colour wasn’t particularly attractive. The superwash came out of the iron very dark steel gray while the roving was much lighter. The second batch I put in was a similar shade to the non-mordanted wool but with a slightly more brown undertone. After the iron modifier, the really uneven superwash skein became quite an even colour. Surprise!

The results of the blackberry with iron modifier is an interesting range of neutrals: 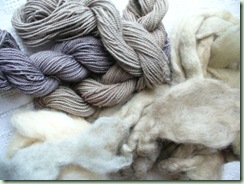 You just never quite know what you’re going to get from plants, do you? Then there was still colour coming from the rhubarb roots so after extracting them one more time this morning, I threw it all into one pot with a skein of Zephyr silk and wool lace yarn. It came out a light golden colour even after an attempt with ammonia modifier, so I think I won’t mess with it further. There’s still a couple of pieces of roving cooling in the pot and we’ll see if they can suck the last colour from it before I dispose of the remains. That 50g of chopped and dried root dyed nearly 400g of fibre! Pretty impressive colour yield.

Rhubarb is far more interesting than you’d think, since it usually gets no mention in natural dye books. And I only have a couple of 35-year-old plants to play with. Also I never thought of using my blackberry vines that always need pruning. I’ve learned a lot! Remember, eat the fruits and dye with the inedible parts. LOL!! Now I should spin up some of my colours.

You'd think blackberry clippings would yield something spectacular, wouldn't you??? But, the color you did get is pretty nice just the same. I really like the steel greys & the almost blues. Reminds me of my experiments with red cabbage waaay back in the 70s. Chopped & kept under the boil with just a little tin, I got spectacular baby blues!! Let the sucker boil & it all turned pink. Remember the nasty stuff we used for "nature" dyeing??? Powdered chrome, tin, copper . . .