I…um…slipped up yesterday at Dressew. I needed a separating zipper to remake an old handspun pullover vest that I had already fulled (on purpose) in the washing machine. It’s now very thick, warm and nearly bulletproof. Of course it’s also too small and needs to be opened up the front for the zip and up the sides so they can be extended with side gussets. I couldn’t decide which colour went best, navy or purple, so at a whole $2.19 each, I bought both. And I still haven’t picked which one to use yet.

Naturally, while I was at the Wonder That Is Our Dressew I…ahem, noticed they had a new shipment of yarns in. So I finally indulged. I mean really - $1.99 a ball for any yarn! How could one resist? Especially when I came across Regia sock yarn in about 20 colourways. Most of it was the Kaffe Fassett Design Line and other similar ones that come in the small 50g balls so you need 2 for a pair of socks. But still - $4 per pair is better than the $16-$18 it usually costs. And Regia is great long-wearing yarn. I also got some super-top-secret yarn for something or other for Alien, as Milady Daughter has been calling my upcoming grandbaby. Not blogging about these projects until much later. After all, Alien isn’t due to make an appearance until November. You’ll just have to wait to see any upcoming FOs until then.

So anyway, I managed to end up with an entire shopping bag full of yarn! 33 balls to be exact at just over $65. Not bad at all, though I’m running out of storage room for this stuff. It seems that everything I’ve made recently has been with sock yarn so it will all get used eventually. Please keep me away from Dressew in future!

I’ve also been dyeing yarns. The rhubarb leaf is done and most of that wool is currently in a rhubarb root (yellow) pot. There’s a separate yellow pot with unmordanted wool too just to see the differences. I also chopped up some blackberry shoots and am currently extracting a dyebath from them. I want to see if I can get gray from it. We have lots of blackberry bushes to experiment with anyhow. More about this later when I’ve finished playing.

While I was dyeing with the rhubarb leaves yesterday, I also used some synthetic dyes on my 6 balls of sock yarn that I bought in March at FibresWest. The half-price I paid ($7.20 each) now seems a lot when I could have got it for $1.99 but hey, I buys ’em where I sees ’em! Also it was a light colour so it could be overdyed and I didn’t see anything appropriate at Dressew anyhow. Once natural and tan stripes it’s now: 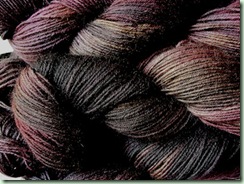 Inky black and purple with brown highlights. Hard to photograph, it’s somewhat darker than it looks here. Gorgeous! And just the colours I wanted in my mind’s eye. I did a low-water immersion on all the skeins at once and used my big stainless steel commercial buffet warming tray on the dye-stove using two burners under it. Worked really well. I rescued this tray from T-Man’s elderly auntie’s house when we were cleaning it out. She had used it for a kitty litter pan! (Yes, of course I cleaned it up carefully first.) It’s very heavy steel and I’m happy I scored it before it got trashed.

The black dye is Lanaset/Telana which is by far my favourite black because it doesn’t lean toward purple or green or brown but is dead black. I used just enough water to come about halfway up the depth of the skeins and included some acetic acid in the water. Then I drizzled the black dyestock over first and followed it with some leftover acid dyes in red, bright magenta-pink and a little yellow at the last just to tone it down some from totally purple. Even though I didn’t measure anything I must have used the right amount of dyestock because it all went into the fibre and the water was nearly clear at the end. It’s all I can do not to start knitting with this right away. I want to make the Abotanicity by Cassie Rovitti from Knitty, Winter 2007.

On the leggings, I’m up just past the knee and able to switch over to a 16” circular. Now I can start the other leg with the dpns and the second ball of yarn. I hate to get too far before I catch up the second leg so I can make sure they match ok.

How can it be May already? It’s still not warm enough at night and I’m still schlepping flats of ever-growing plants in and out of the greenhouse daily. Please tell me I’ll be able to actually plant them in the garden some day soon?

I work near Dressew and it takes a lot of courage to walk past and not fall over. But I must say, the neutrals and the nakie yarns went quickly. There are still some Rowan Purelife balls in more of a darky beige but it would definitely affect the over-dying.

Note that I've been shopping at Dressew since I was a teenager in the 1960's!!! Don't know how I could resist if I worked near it. I think it's a good thing that it's just that little ways out of my usual haunts so that I have to make a special effort to get there. Plus they don't take credit cards and I don't carry much cash any more. (No I don't have a debit card either.) It definitely keeps me from going even more nuts than usual. And now that they carry sock yarn...urp! My weakness...