Beyond The Rainbow Bridge 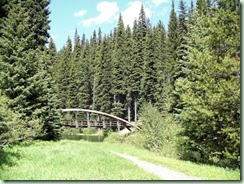 No, not that mythical pet heaven. The real Rainbow Bridge in Manning Park, BC. That’s where I’ve been – at the Annual Fambly Campout.  We had a record 23 people (not including the two pregnant bellies!) representing Four Generations. (Plus a couple of teenaged friends, because apparently teens must travel in packs.) It was fun, if completely exhausting! Nana didn’t actually camp but had a comfy room at the lodge and one segment of 5 rented a cabin, but the rest of us intrepid folk took up a double and two single campsites. We had two VW Westphalia camper vans and a plethora of tents, including one luxurious 3-room palace. It was quite the production! Made even more challenging by the fact that the washrooms were being upgraded and were closed leaving us with limited pit toilets and no showers. There were occasional line-ups and the ladies’ ran out of toilet paper several times. Good thing the little ones had their small potty and we had our own trusty “honey” bucket for night-time use.

We heard the cry of the loon and hobnobbed with the wildlife, including Mrs. Barrow’s Goldeneye with her six little fluff-balls: 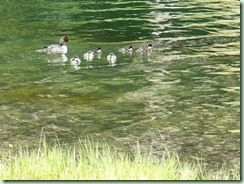 We also fed the whiskey jacks (Canada or gray jays) and tried not to feed the Clark’s nutcrackers (sharp beaks and claws!), ground squirrels, chipmunks and Douglas squirrels. We saw a lot of mule deer including this young buck just getting his first set of horns: 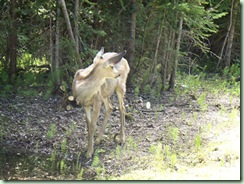 Several folk went fishing and Princess Pink caught her first trout. Her grandpa cast out for her but she caught it and reeled it in all by herself! Only one other fish allowed itself to be caught in several days of fishing, so it was pretty exciting that she got The Whopper. Here’s the proud father and daughter fishers with their hard-won catch: 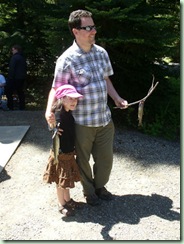 And yes, she did actually eat some of hers and even I got to have a bite too. Yum.

We had the obligatory evening campfires and of course the snowball fights and snow baseball on the Strawberry Flats trail: 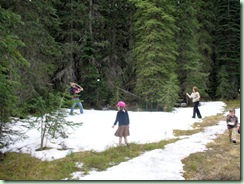 That’s the grandbeasties with my sis-in-law pitching and baby brother-in-law hitting a home run. (Easy to do when the ball disintegrates on contact!) There’s so much snow in winter and it’s so high up that it melts slowly and there’s guaranteed to be some still on this trail (and others) in June.

Manning is such a lovely place. 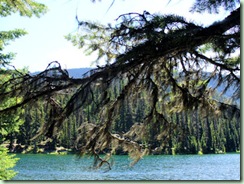 We were really lucky that the weather held out warm and mostly sunny the whole time we were there. You have to be prepared because you can experience anything in the mountains and sometimes all in the same day! It proved it yesterday when we went to Lightning Lake to have our final picnic. It started out lovely and sunny while we packed up camp but then all we had time for was lunch before it started to rain. This squelched plans for kite flying and bubble blowing especially when Princess Pink tripped into one of the gazillion ground squirrel burrows and skinned her knees so we were all quite ready to head on home a bit early.

But I’m sure we’ll be ready to come back again next year. Beyond the Rainbow Bridge: 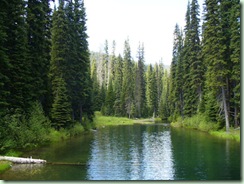 I would have been pretty put out about the bathrooms!

I'm still happily lurking as you embark on your dressmaking adventure. Filing it all away. Nothing is more fun to watch than somebody else in the grip of a creative obsession.

Thanks, hon'! Always nice to know somebody is out there watching me stumble around. Loved your "tell all" post - totally worth giving you the award just for that! Hope you're feeling better now.