I’m still on a sewing kick but I haven’t done any actual sewing yet! Right now, Debbie Double and I are trying to make a proper basic sloper for me. Here’s the almost-completed front and back: 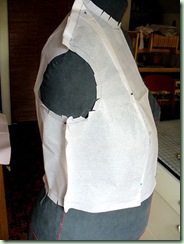 The pattern shapes look a little weird compared to a “normal” bodice, because even after using my measurements and following this tutorial on BurdaStyle by gedwoods (aka Geoffrey Edwards from Quebec), I still had to tweak quite a lot. However, his directions if you follow them carefully are really excellent and clear. Right away I got a sloper that was much closer to me than anything else I’ve tried so far. It takes some careful body measurements and some math (this free downloadable calculator specifically for dressmakers was a huge help), plus several rulers, large sheets of paper and my big worktable. You might not need a t-square, right-angle, 18” x 3”, 12” x 1”, centre-finding and dressmakers’ french curve but they all sure came in handy!

Because I’m a “lady of a certain age”, things have slipped around somewhat in this body as compared to a younger woman. I had to lower the bust point and do a FBA (full bust adjustment) to get enough room in front. It wasn’t a large amount to add but it sure helped to stop the front from pulling up. And it’ll be nice to have the bust darts end in the right place for once. (Even a good bra doesn’t solve the droop! I’ve always had a low bust.) A side effect of this adjustment plus my “fluffy” front waist meant that the dart there is very narrow, only 1/2” and a lot shorter than the back waist dart.

This sloper has a big dart from the bust point up to the shoulder at the neck. Real clothing rarely has anything like that, but this leaves the side-seams straight so the shapes are easier to deal with at this stage. Later, the dart can be moved somewhere else (most often at the side seam) or substituted by gathers, tucks or whatever. This pattern is not going to make anything that is at all wearable but to act as a raw basis for other designs. It doesn’t have much ease to move around in, just for starters.

Next I had to take a tuck in the back armscye to account for my rounded upper back (thanks to degenerative disk disease). The curve in the pattern from this tuck was redistributed into the shoulder and waste darts. Now the back side seams are on the straight grain instead of angled inward! Whatever it takes. It has to balance the front which has also been trued to have straight side seams.

And that tuck wasn’t all that the shoulders needed. I also had to move the back shoulder seam forward 1/2” at the arm edge and take an equivalent amount out of the front shoulder seam. This moves the seam forward to account for my hunched shoulders. In the same adjustment, I also moved the armhole down an equal amount so it doesn’t get tightened up. The shoulder seams also needed to be slanted down more to accommodate my sloping shoulders. Now armholes and sleeve caps will finally end in the right place instead of drooping. Yay! Deb and I are definitely getting somewhere here.

I haven’t tested this sloper in muslin yet because I’m waiting until I do the skirt and the sleeve to go with it. These are also available as tutorials on BurdaStyle thanks to the very helpful gedwoods! He has the best and rarest combination of skills, being both a scientist and an artist. If I can follow his steps, almost anybody could.

I nearly forgot to mention that I got this book the other day in the post: 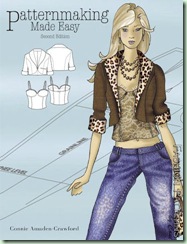 Patternmaking Made Easy by Connie Amaden-Crawford, second edition 2007, self-published. It was very pricey but it’s basically a college-level textbook on pattern drafting. I’ve only started reading but I’ve already found out that there are many types of slopers for different purposes, though nearly all of them begin with the basic one. There’s not really much about fitting to a particular body shape, but the focus is on how to use slopers to create fashion designs. There are even basic 1/4-size patterns that you can copy and use to play around with. If I can absorb this stuff, I may never need to actually buy a pattern again. Heh.

Now I’m waiting on the reprint of another of Connie’s books on sewing, including how to assemble a garment without written instructions and diagrams. My favourite Burda magazine’s patterns have sketchy instructions at best and if I design my own it might be good to consider how best to put the pieces together, right? I’m hoping this will be the comprehensive book I’ve been hunting for for quite awhile.

Well, back to the drawing board. Literally!

Love following your progress with DD. All the info is great and inspiring!

Glad you're enjoying it! Too bad everything is taking a decade of time to accomplish, huh? Unfortunately I'm all about the process. ;)