This weekend was filled with lots of very satisfying gardening. I’m finally picking peas (snow & snap) daily and there’s kale, broccoli and lettuce. Several other veggies are finally recuperating from the poor weather though it still hasn’t warmed up. They say we’re in for a heat wave so I’m hoping that will help the even more pathetic ones. Even if it means watering every day. T-Man and I got a lot done as far as weeding and pruning, both front and back and in my dye garden. Yeah, I know I’m weird for enjoying all the work! The woad is nearly ready to be harvested for the first time, though it seems as if the bugs have bothered it more than usual this year. As always, some things are doing better and some things not so much. Every year is a different tale of successes and failures. That’s life in general, huh?

So Saturday was our 39th wedding anniversary and although we acknowledged it to each other, we didn’t really celebrate in any special way. Not that we take each other for granted! On the contrary, every day together is wonderful. OK, damselfly – enough of the sappy stuff. T should really have gotten a medal for putting up with my whining and whingeing, especially recently.

One thing I did finally get however was my prize basket that I won. It was filled with lovely goodies made by members of my weavers’ guild and raffled off at our gallery show at the Seymour Art Gallery. It was a huge surprise for me since I rarely win anything and even more rarely win anything that I really want. This stuff I want! 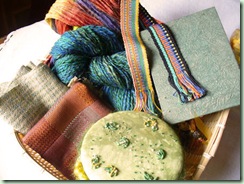 Don’t know if you can tell from this photo but it all coordinates nicely. How did they manage that? And I know every single person who made these items, some of them for 20 years or more. That makes it even more special! Here’s each piece in detail. First the round box with beading on the lid and dyed locks around the side: 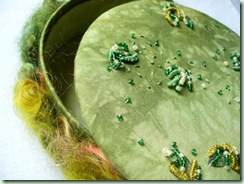 Made by Bonnie Adie who is a fabulous stitcher. And this little book with ribbon tie and page marker by Jay Rudolph: 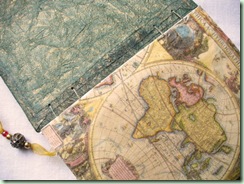 The end pages are world maps. So cool. Now I have a special place to do my “Ahem-tangles”. (I’ve decided that doodles really don’t need to sport a registered trademark.) Jay is one of the more youthful members of our guild and an expert in bobbinlace among other arts. Like Bonnie, she’s a graduate of the Capilano University’s Textile Arts program.

Next we have a scarf by my buddy Catherine Barr: 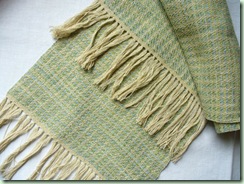 Cathie used a silk warp and Korean hanji paper weft in a twill weave which gives it a crisp tailored feel. T-Man wants this one!

These bookmarks are by our current guild president (and my perennial chauffeur) Beryl Hickinbottom: 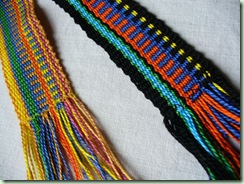 She wove them on her little inkle loom. One can never have too many bookmarks! And I love the asymmetrical patterns.

This lovely skein of silk and wool yarn in watery blues and greens is by Linda Spence: 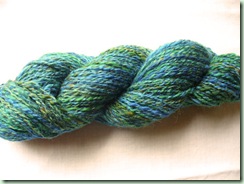 As well as spinning and weaving, Linda is also a prolific rug hooker. And we’re not done yet! Next up we have Elizabeth Bell’s gorgeous little piece of multishaft doubleweave: 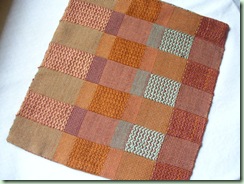 She calls it a tea trivet but I don’t think I’m going to be staining it with tea anytime soon! The raw edges are finished by tucking them inside and handstitching the gap closed.

Last but not least is my pal Jo Anne Ryeburn’s incredible scarf: 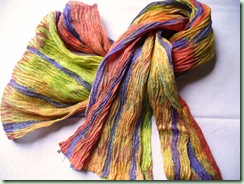 The yarns are so fine it’s hard to imagine that it was handwoven! And shibori (tie-dye) woven at that. She wove in the ties as she went, drew them up tight and did a series of dyeing and painting to get all the colours. I’m going to have to ask her for more details, but I think the pleats are permanent.

Meanwhile because I was busy in the garden and such, I haven’t had a chance to work any more on my sewing project. I will shortly repair to my studio but first I have to take my new bike, Rideau, up the hill to the mall to get some tea. I’m nearly out of my favourite Damselfly Blend and need some Murchie’s #22 to mix some more. The other ingredient is Choice Pure Jasmine which I already have. Thank goodness because it’s super-expensive. (But nummy!) It’s finally nice enough outside today to make me feel like getting out and cycling.

And we won’t discuss the Creeping Crud (aka psoriasis) because it’s just too gross and annoying for words. A hint: regular panties have now become uncomfortable. I need pettipants or tap pants or something. Hmmm…I may be getting more than just tea at the mall. At least my feet have healed enough (after two stinkin’ weeks) that I can walk on them again without ouchies. My fuzzy slippers are still the most comfortable footwear at the moment though but it seems like it will be warming up too much to wear them soon. Fine!

You know, this would almost be amusing if it wasn’t so horrible. It’s like watching the tide coming in – while you’re stuck on a sandbar helpless to stop it. Oh, alright. It’s not going to kill me. Just annoy the pants off me! Literally.

Great prize ! Better still nice knowing all the neat people who made them too...

So sorry about the creeping crud. You could go commando? :) Whatever is more comfortable....

Yup, I've been going commando! ;) At least some of the time.