Is It September Already?

Whew! Finally got a photo so I can post a final Finished Object. 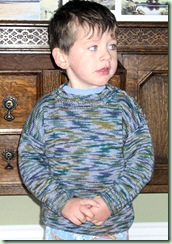 Comments: I never did a gauge swatch or even measured it after the fact so I have no idea what it was! I just knit it the same way I did his first one that I made when he was 1-1/2. Only now he’s 3-1/2! So I followed the pattern for size 4 instead of size 2.

It didn’t really take me that long to knit it. The delay came with the assembling because my hands have been too cracked and sore. It took several hours of sewing to put it together finally the day before I was to give it to him. Just barely had time to wash and dry it on the sweater rack in the sun.

The original sweater got lots of wear so I hope this one does too. Looks like the sleeves and body are too long still which is great – gives him some growing room. Kids always grow taller before they get wider.

I forgot to take a photo of the finished sweater so his mom coerced him into this one still in his jammies! Apparently she had trouble making him stand still long enough. Cute little beastie, isn’t he?

When my hands are up for it I’ve been knitting a wee bit – a row or two at a time – on my little handspun scarflet. It’s coming along slowly. I find it interesting that will all the colours blended into the yarn it mostly looks like blue and red stripes when knitted up. Unless you look at it v.e.r.y closely. Only then do you notice the greens and oranges mixed in. Creates a greater depth of interest, yes?

I’ve got three friends (plus myself equals half of the Spectrum Study Group) coming over tomorrow for a Woad Day where we’ll try to use up the rest of it, including the Chinese woad. I have no idea how much colour there is left in the leaves after all the cool weather and rain but it’ll be fun to find out. I’ll try to remember to take photos. I want to do some itajime (folded and clamped resist) so I need to go hunt for some appropriate fabric.

In other news, even though my skin is only a little better I’m feeling emotionally more stable these days. After the 2 dermatologists at the Skin Care Centre put the idea in my head when they were confused over what my disease was, I did some super-serious research. I think I now know what I actually have and it’s not psoriasis, though the symptoms are quite similar and the prognosis just as murky. However convincing Dr Serious Dermatologist to even reconsider his diagnosis is going to be extremely difficult. What I suspect is very rare and he may never have seen a case of it before. Plus he’s not going to take the opinion of some little old female patient (albeit one with Killer Google Skilz!) over his own education and experience. I hope to get him to at least do a biopsy, which he should have done in the first place. (Not that I really want one. Ouch.) And perhaps get a second opinion. If it’s really impossible to get him to agree with me - or preferably come up with it himself without my prompting – it doesn’t essentially matter because most of the treatment options (such as they are) are the same anyway. We’ve already tried and rejected the main one, the evil Soriatane. I’ve already stopped using the tar and have cut down on the other strong meds in favour of shea butter, petroleum jelly and other moisturisers and I’m already seeing improvements. Go figure! Though it would be satisfying to have it official, the truth as I see it helps me feel much more in control of things and that’s what really counts. More on this when I’ve seen him again next week. As my dear old mummy would say, “We’ll see.”

Louisa.... remember my dear Friend, that it YOUR body, and you can decide what you want to do with it... remind dear DR of that....

Sometimes the Doctors are so sure of the diagnosis that they don't even look at any thing else when the treatments fail . . . Dig in your heels & DEMAND a biopsy! If it's the only way to know for sure, then you want to know! Doctors are just regular people with more education - not GODS, even though some of them think they are.