My! It’s been a week since I blogged last. I’ve been a busy damselfly! First it was Woad Day on Thursday with half of my Spectrum Study Group. The 4 of us picked my woad leaves, keeping the Chinese woad separate. We got about 2/3s the amount of Chinese woad than the regular kind. We could have picked more of the regular leaves but I didn’t want to exceed the size that my pot could handle. We used my usual recipe for both, adjusting the proportions to suit the smaller Chinese woad pot.

There was so much blue right away in the Chinese woad! It was amazing how strong it was. The colour was closer to indigo than regular woad usually achieves. Here’s a very pleased Masami hanging up her woad-dyed things alongside the others: 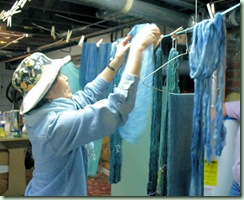 You can see how different all the blues are! My wool on the right is dyed in the Chinese woad. Some things also got hints of a purple which later oxidised to grayish. I believe that’s the indirubin colourant that is also in the woad along with indigo. It’s what gives it such unique shades. (As a side note, there is some evidence that this chemical is useful in cancer treatment, particularly for leukemia.) I hope to grow more Chinese indigo next year when I have a chance to start the plants earlier. We’ll see how well it overwinters because I’d like to get at least one plant to seed. Not at the same time as the regular woad though so they don’t cross-pollinate.

Because I’ve been feeling so much better, we were invited to go with T-Man’s brother and sis-in-law to share their campsite at Manning Park for the long weekend. I was so excited to go somewhere finally! Saturday was shirtsleeves warm and mostly sunny but Sunday and Monday were plagued with intermittent rain. It was so cold that at one point I had on 5 layers including 3 fleecies and my Gortex rain jacket. Not to mention 2 pairs of socks plus sweatpants with nylon/lycra capris underneath. And I was still freezing. We had lots of fun though, see? We saw a pileated woodpecker (think Woody Woodpecker), cheeky Clark’s nutcrackers and whiskey jacks, a mule deer doe and her fawn, and a flock of very tame grouse. This is the only one who posed for me long enough to get a picture. 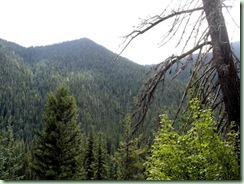 You can still see lots of beetle-killed lodgepole pines on the mountain slopes. But it’s still really scenic. We took several long hikes: 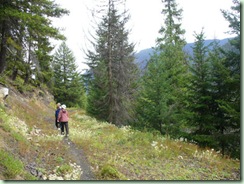 T and I were falling behind because we were nibbling on the thimbleberries and black huckleberries. Yum! The black currants were not so tasty – too seedy and sour.

On our way home on Monday, we stopped at Sumallo Grove in the midst of the huge cedars. There’s a circle trail where you can see the grove’s trees but we went further along the Skagit River trail to the Delacy wilderness campsite, about an 8 kilometre round trip. Just off the trail and right beside a lovely waterfall is an old mine site: 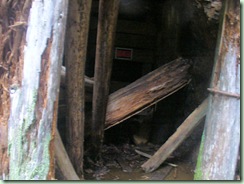 Don’t know if you can just see the “Danger” sign in there where someone has broken open the blocked entry. There’s also the remains of an old cabin and even more interestingly a truck: 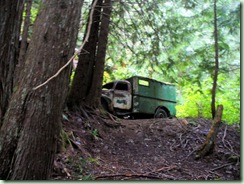 It’s been there for so long that trees have grown up around and inside it! The engine and tires are still there though. I love the front grill: 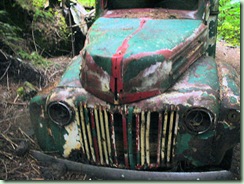 We were prepared for the rain but we were all pretty soaked and muddy by the time we got back to our nearly-matching VW Westphalias for lunch. I was really happy that I was able to walk with only a bandaid or two on the worst cracks on my soles.

Which brings me to today. Time to go back to Dr Serious Dermatologist. Blech. I’m renaming him Dr Arrogant Dermatologist. No, I wasn’t able to convince him to even consider that I had something else besides psoriasis. I told him I started healing without all the meds and he said I was probably just sensitive or allergic to them. Well, yeah. Then I refused another corticosteroid (which I’ve already tried and it doesn’t work anyhow) but we decided to try one more last-ditch med: Protopic (aka tacrolimus). At least it’s not steroidal but is normally recommended for eczema when nothing else works. For psoriasis or PRP, it’s off-label. But as a “topical immunomodulator” it’s worth a try, pricey though it is. My portion of the cost of 2 small tubes is nearly $40! It had better do something useful, or I give up. Truly this is the last prescription med I will allow. The very final one. (Make a note and call me on it if I renege.) I will give it a month or at least until we come back from our holidays.

Yes! We are actually going away. Yippee!!! T has a woodturning conference starting on Friday until Sunday and we’ll hopefully be leaving for parts south sometime on Monday. I’m thrilled that I’m feeling better enough (and no stinkin’ black tar!) to go. It’s our last hurrah before the dark of winter keeps us close to home. More about where we’re going when I research the options, but we’re thinking of Crater Lake and return via the Oregon coast. Much to do before then.

The woad colours look wonderful! Where did you buy Chinese Woad seeds? Glad you are feeling somewhat better.

Thanks, Evelyn! Yes, I got the Chinese woad seeds from Richter's in Ontario. I'm not happy with the germination rate (only about 1/4 of them came up) which is why I'm hoping to produce some seeds of my own next spring. I'll share with you if you want some. Though it will be too late to plant in 2011, you'll be ready for 2012! The plants are not nearly as durable as regular woad so first we'll see how it makes it through our relatively mild Zone 8 winter.

I agree with Evelyn - that Chinese Woad gives great color!! I should grow some woad myself!
You know, you should seriously think about seeing another Dermatologist & get that biopsy. Maybe UBC will recommend someone with an open mind?? Or try an Herbalist? Sometimes you just have to hunt for someone - I remember seeing doctor after doctor in my 20s to find one that would even discuss a problem I had. One even told me I wasn't getting enough sex! I raised hell with my doctor about that one. But, I hung in there & eventually found someone just down the road.

I'm going to see what happens while I'm away and decide what to do about the derm situation when I get back. I've had a better one recommended (his name is just underneath my derm in the building's directory!) and will perhaps bug my GP for a referral. Seriously though, even if I get another diagnosis it's not going to make any difference in my treatment. Nearly everything that could be tried has been and the other options are unacceptable - to me if not the derm - as too risky or too unlikely to help. It's not like they even know the exact cause or why certain meds work or not. I'm probably as informed as anyone without a medical license! We'll just see what happens. Maybe it'll go away by itself the same way it appeared? You never know! LOL!!