When I was looking through my finished project notebook I found that I hadn’t ever written up the last sweater I made. So here ya go! 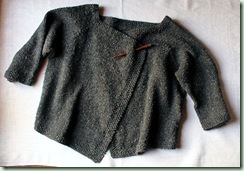 Pattern:  sassymetrical by Gay Schiff (gaysknits.com). This is really only a recipe for one size: x-small. Very easy style to adjust though.

Comments: A quick project as a nice change from tiny yarn and needles. This is the recycled yarn that wasn't suitable for the Princess due to the nylon content. Well, I wasn't going to return it to the shop! Mine. I really like this yarn. It’s very easy to knit with, cohesive but not too string-like and softens just a bit in the wash. It takes gentle machine washing very nicely and I’m betting you might be able to machine dry on the air setting but I haven’t attempted it yet. The ball band recommends 5mm needles but I like the fabric I got on 4.5mm. The larger ones create a fabric that looks too sleazy to me. Lots of yardage on these balls too. 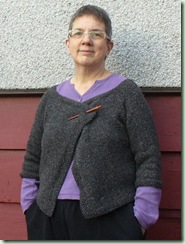 I've cast on the same number of stitches as called for in the pattern but it’s a heavier gauge yarn so it up-sizes to a medium. Top section is 7" to the underarm and I cast on 6 sts under each armhole. Making 3/4 length sleeves and a longer body (10" from underarm). Used one-size smaller needle for seed stitch hem to keep it from being too floppy.

I'm hoping the wide neckline will stay put on my admittedly wimpy shoulders. Probably should have used the smaller needle there also. If it doesn’t cooperate I might have to snug it up a little with crochet. We'll see. So far so good.

I still have nearly 2 balls of this yarn and was able to get a third one from Birkeland Bros Wool yesterday. They didn’t have any more unfortunately but this gives me about 600 yards which is hopefully enough to make a zipper-front vest. Though I’d love to have another ball just to be on the safe side.

And I also forgot to write up the second iTouch cosy. Sheesh! Where was my brain? Oh yeah. On a cute little baby granddaughter, that’s where. No surprise. 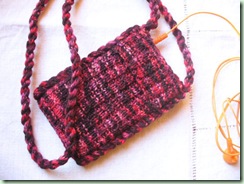 For: Ruby, my iPod touch

Modifications & Comments: Just like T-Man’s, I used smaller needles than called for. Made the same fold-over flap with an eyelet hole for the earphone cord but no belt-loop. This time I made a strap to wear it around my neck or slung across my body to keep it out of the way.

I used my new toy, the Embellish-Knit, and my fringe twister to make a twisted doubled i-cord for the strap. I hand-stitched it to the body of the cozy and buried the ends in so they don’t show. The strap is much less stretchy than a plain i-cord.

Whew! Have I missed anything else? I’m nearly at the toes on the Dark o’the Moon knee socks. Doubt I’ll have them done to add to this year’s inventory though. Even though I’m not quite done I’m still feeling the need to cast on for something new. Bad sign! I may not be able to resist for long.

Then there’s the Watercolour Quilt which is sloooowwwwllllly coming along. I haven’t been ignoring it, just working in small time increments. I’ve decided to modify the size somewhat because I was attempting to make a king-size which would necessitate some major piecing to get enough squares. So instead of my original 16 x 16 I’m going for 15 x 13 and only sewing 1/2” seams. When it gets on the bed it will go with the longest direction going across so it will tuck in well. Should work the way I envision and I just might get this thing done in the next few weeks. I hope. I want to check another thing off my list and this one has been dragging on since summer when I did the big dye session on the vintage cotton sheets. It’s good to take advantage of the warm weather when we have some. Right now it’s gone quite cold and Procion dyes don’t work so well this time of year. Luckily there’s always something else to occupy me. Heh.

The sweater looks very nice on you!

Thank you, darlin'! Not bad on the old pear-shape. Which doesn't seem to want to change to something more svelte no matter what I do so I'm going with what I have instead of wishing for something that doesn't exist. Acceptance, right? Working on it. Heh.