I’ve been a bit remiss in my posting lately. I do have lots to talk about though. We had a lovely New Year’s Day family dinner at my brother-in-law’s. Most of the usual suspects were there so there was nearly as many as there was on Christmas Day at our house. And their house is even smaller! Though they do have a finished basement where the young-uns could go to play out of the way of the rest of the gang. Kept the noise level down somewhat anyhow. At least until the girl cousins (6 & 5) started a friendly screaming contest. Yikes! What lungs! They shut up pretty quickly when it was made clear that they were driving us all nuts. There was also apparently a cute photo taken of the littlest cousins which I haven’t yet really seen. I want a copy! Just a hint…

T-Man has had quite a few days off here and there also which of course kept me busy. We walked a lot whenever the weather cooperated. It was a vain attempt to walk off some of the holiday goodies we’ve consumed the last few weeks. Gotta try anyway, right?

This past week I got to personally remove 1-month-old Rosebud’s third leg cast and help give her a bath before heading out to Children’s Hospital for a lengthy round of procedures. I was glad I came with Milady Daughter because it was pretty major stuff: ultrasound on both legs, x-rays, an injection that may or may not have been botox, and finally a fourth cast. Rosebud is participating in a study to prove that the botox works and relieves babies with club foot from having to have surgery on their Achilles tendon. They do such wonderful work on this and I can already see an amazing difference in her little curly foot. It will be as close to perfect as it can get but it’s a long road. At least their study participation relieves them of some of the costs of the botox and the boots-and-bar system that comes later. (Edited to correct: actually she gets her special running shoes later.) And they get lots of detailed information from the extra tests and documentation. Win-win, I would say. Except for all the hospital appointments! Can you spell t-e-d-i-o-u-s?

Then yesterday my Spectrum Study Group came over and we made use of my dye studio with a day of Yellows! Coreopsis and osage orange were the dyestuffs. It was hard to figure out how much dried coreopsis flowers to use since I wasn’t sure of the exact weight of the skeins everyone brought. I erred on the side of excess and went with 250g which I thought would be good for at least 500g. It was really strong though especially after I did an overnight soak and 2 more heat extractions and put it all together for the dyebath. So intense we got a lot of deep gold colours from the first skeins. Only a small amount was dyed in the not-particularly-exhausted second bath and it was still quite gold rather than yellow. There’s plenty of colour left in it still. I’m going to try to save it for next month in the cold room which this time of year is as cold as a refrigerator.

I also soaked the 200g of osage sawdust overnight and only simmered it for about 2.5 hours or so before we dyed with it. It wasn’t nearly as strong and we got some lovely clear lemon yellows from that bath. My skein of silk was already dyed in a very uneven indigo so I got a lovely green in the exhaust bath. It ended up practically clear after the second use. I am going to try to extract a bit more colour from the sawdust though and see what we get. I’ll save that bath in the cold room too.

Here’s just some of the colours we got: 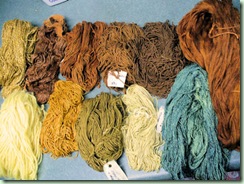 (These are all still wet of course.) The pretty green in the middle-bottom row was osage with an iron modifier afterward. The more teal colour is my indigo overdyed with osage. My big skein of superfine merino lace yarn on the right was the very strong coreopsis with an ammonia modifier afterward. It’s a gorgeous shade of rusty brown. Want to see it closer? 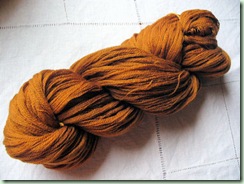 I plan to knit a fine lace shawl with this. Eventually. I totally adore that colour!

We have several salient points about dyeing with natural dyestuffs but my favourite one is:

Love the colour you get.

You can aim for a certain colour family but you never know what exact shade it will turn out. It’s always an adventure! It’s somewhat easier to be predictable with extracts but even then there are variations. Helps to take notes. Also discovered: yellow is a perfect colour to dye on a rainy cold dark day in January. Cheers you right up.

I have a couple of FOs too but I’ll save them for next time.

Actually, it's not the boots and bars we get to save money on... it's the special running shoes she gets once she's mobile that they cover for 2 years. Either way it's a big savings as you know how little feet grow so fast.

Yay for studies... I would have done it anyway even if we weren't getting anything out of it. =)

Ah, thanks for clarifying! Guess I was hazy on the details. And also thanks (not) for sharing your sore throat! Whaaaaa!!!