The weather has been lovely and sunny though fairly cool for the last few days. Why is it that I feel more like doing energetic things when the sun is shining? I especially get the urge to clean and also to start new projects.

So on Sunday I started some seeds under the lights on the basement counter: 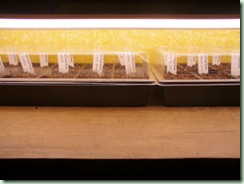 That’s two dozen different veggies, herbs, dyeplants and flowers in total. My new flats and clear domes from West Coast Seeds are working out very well but I had to trim an inch or so off the plant tags before they would fit underneath the lid. It’s quite early to get them going – even for our long (but cool) growing season. Some will be eaten as babies without ever going into the garden and then I’ll plant some more. Some take a long time to germinate and/or grow large enough to transplant. Some will be grown as big as possible here and then transferred to the greenhouse to wait until the garden is ready to plant. More plantings will be happening every few weeks or so. Spring is coming soon! Really.

Speaking of plants, I finally got an offer of some seeds for Japanese indigo (Persicaria tinctoria) for which I’ve been hunting for quite awhile. They are not easily available commercially and seed viability is only one year. Apparently it’s difficult to get them to set seed without potting up a flowering plant late in the season and bringing it in to finish where it can stay warm enough. It’s going to be fun to experiment with growing a different blue! More on that as it happens. I need to send the money to the kind dyer/gardener today. Oh goody – an excuse to go for a walk in the sunshine.

And speaking of indigo, I recently found out that a dear friend sadly has colon cancer. Yes I know that they don’t seem related subjects but woad (especially Chinese woad) has been studied and found to contain some anti-cancer properties. And I also know that you have to ingest it not wear it to gain benefit. However, I’m thinking of it in terms of a talisman against illness so I knitted her a small shawlette or scarf thingy with some yarn that I dyed at that Maiwa Symposium workshop a year ago last October. I used the Annis shawlette pattern by Susanna IC from Knitty. It’s a lovely C-shape with an Estonian lace edging (nupps!) and a plain area knit with short rows to curve it.

I of course changed a few things. The pattern calls for a lace yarn to make a very lightweight ethereal shawlette but I had a heavier sock yarn that I wanted to use instead. It’s kind of a symbol for me of defiance because Denise Lambert in the woad workshop told me that the nylon content in the sock yarn would not take the dye. But it did! Very well too. Unfortunately I never rinsed it properly afterwards because a lot of blue crocked off on my hands while I was knitting it. I knew I could wash the finished item after it was done to fix the crocking issue.

Another change I made was to use the typical Estonian knitted-on cast-on with doubled yarn on a larger 6mm circular needle. (I used my Denise set which promptly turned blue from the crocking woad!) Then I switched to my Addi Lace 5mm circulars and knit 2 garter rows before starting the pattern chart with row 1. This made a nice solid edging. The nupps proved to be a bit of a PITA on such large needles and I finally figured out that a 1.75mm crochet hook was the only way to work them without tearing what’s left of my hair out in frustration.

I was worried that I was going to run out of yarn since I used half of it just for the edging so I switched to 4mm needles for the plain short-row part. (Turns out I should probably have used 4.5mm but they were occupied in my Remix Vest.) I also ended by knitting what would have been the last purl row instead and then knitting the last right-side row to give a little bit of garter on the edge. Then I bound off on the non-public (wrong) side with the Estonian k2togtbl technique from the pattern instructions. This made the top edging a little more substantial and less likely to roll. It also balances the beginning better. 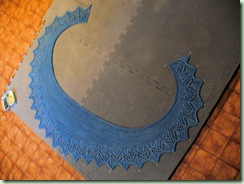 I’m waiting until tomorrow before I unpin it to give it a better chance to dry. Then I’ll take a better photo with a close-up shot of the lace. I just realised that it only took me 4 days to complete this project! My friend is coming over on Thursday so I can surprise her then. Shhhh…don’t give the secret away.

Beautiful shawl, beautiful colour. What a wonderful way to help your friend.

Thank you, Evelyn! It's not much in the greater scheme of things but she needs all the help she can get right now.

as usually a great job, you are so talented... i hate nupps, i have learned to cheat and put on a bead where the nupps are suppose to be..and i like it so much better..so i still have my all my hair..

Thanks for the kind words, sweetie! I think in the sock yarn the beads would have to be quite large to show up as well as the nupps do. That might be rather heavy for this little shawly-scarfy thing. I have substituted beads before but this time I was all for the nupps despite the travails of making them! Sometimes there's just no substitute. Even if it's not so sparkly!