My! I’ve been a busy beaver damselfly since last I posted. Thursday evening was my weavers’ guild meeting. The talk was by fellow member Vennie who explained her very interesting theory that natural dyes contribute to our health. She uses dyes, both natural and synthetic, in a cancer lab and is campaigning to shift procedures over to the safer natural dyes. Vennie also uses natural dyes at home to dye her yarns. It never occurred to me that the colours of fruits and vegetables are actually phytochemicals with antioxidant and immune system support, among other benefits. She also linked the plant colours to the seasons. For example: spring greens with their chlorophyll are helpful to detoxify our internal system after a winter of heavier foods. I’m hoping that Vennie will yield to her audience’s encouragement to write this up for publishing in our guild newsletter. It was a fascinating hybrid of science and Chinese medicine.

On Friday I went with my friend Dianna out to Abbotsford for the annual FibresWest event. Sorry there’s no photos but I accidentally left the card out of my camera. Doh. I didn’t take any of the many classes on offer but we did listen to an hour-and-a-half lecture by Ivan Sayers, local treasure and walking historical clothing encyclopaedia. He discussed various types of lace and how it was used in fashion from the 16th Century onward. It would have been much more interesting if I could actually have heard it all but it was my own fault for sitting in the cheap seats. The AV system was truly sucky so Ivan eventually gave up on the microphone and then I couldn’t hear him when he turned away to point at the slide. Oh well. Not like I haven’t heard his lectures many times before! The examples he brought from his collection were exquisite though: needle lace, Irish crochet, superfine bobbin lace etc. He was only missing knitted laces (and perhaps tatted – I didn’t notice any).

Speaking of knitted lace, there were some pretty spectacular examples wandering around on people. I saw a gorgeous cowl collar and shawls galore. There was also a lovely lacey crocheted vest. And the shopping was very tempting too. However I managed to come away without going too crazy: two books, a pewter sweater clasp, a cone of black Zephyr wool/silk, and one of these: 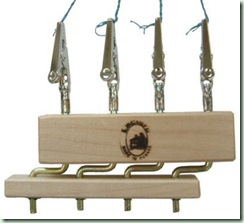 I already have a 2-end one by the original designer/maker, the Langs. This one is from Leclerc. Wonder if it will work for making ply-splitting cords as well as twisting 3- and 4-ply fringes? We’ll find out eventually.

It was lovely to see so many old friends and familiar faces on the floor and in the sales and demo booths. That’s the part I love best about these things. Seeing all the yummy yarns and fibres and new toys and tools is great but getting hugs from someone you haven’t seen for a year is icing on the cake. However I was really firm with myself and left a lot of pretty fibres behind. Shetland, BFL, yak, cashmere and even sock yarns at 30% off! It was hard but I tried to remember all the stash I already have and how much time it’s going to take to use even half of it. I don’t really need more books either but they were much harder to resist. I plan to do a proper review of them, hopefully in the next post. First I have to read them properly! A hint: socks.

Saturday and Sunday were both rather pleasant days with some sunshine so T-Man and I laboured in the vegetable garden getting it ready for planting. We managed to get quite a lot done: spreading mushroom manure and compost around and shaping up the beds after the soggy winter rains squashed them. I pruned off the dead branches (aka crewcut most of the bush) from Lazy Rosy, my recumbent rosemary plant. She didn’t much like the cold snap we had back in November even with the protection of the greenhouse. I’m hoping she will put on some new growth now or I’ll have to get another plant. Again. We are so marginal for rosemary here. It’ll be fine for several years and then unhappily die off if we get a few too many nights of -10C. It’s too big to bring into the house and obviously the greenhouse isn’t protection enough. Global warming-schmobal warming.

Lots more to do out there but we are only good for 3 or 4 hours of that kind of hard work before we must quit. Oh well. A little at a time gets it done also - eventually. I don’t hurt anywhere today so that’s a plus. Now to tie it into the beginning of this post, I harvested a pail full of leeks and kale that overwintered a lot better than poor Rosy did. Green Things to eat for Spring. Yum.

Um... Louisa? What IS that piece of equipment?