I was so pleased that I felt well enough yesterday to go for our usual weekly walk to the magazine shop and also to grab a few much-needed groceries. Not quite healed yet, I needed some encouragement to get up the steep part by City Hall on the way home so we stopped for a short break on one of the benches in front of the community garden. We even passed our squeaky-green mayor Gregor on the way! I don’t care what anybody says about his politics. A man who builds bike lanes and encourages backyard chickens and veggie gardens in spite of all the flack he gets for it is ok by me. City Farmers Rule!

So I wore my new Banana Skirt for the walk – to test it out, naturally. It acquitted itself very well although it’s going to be too warm for such heavy fabric very soon methinks. But it’ll be handy next fall again especially layered under shorter dresses or tunics. I’m considering it an unqualified success.

Yesterday I also finished the big-shirt that has been hanging around since 2005 half-done. Finally! And it only took a couple of hours to do. Not sure whether to count this shirt as one of my 2011 garments when I was really just finishing a very old UFO. The pattern is from 1986, View B but including the pocket: 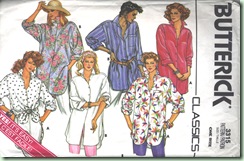 I’ve already made this one twice before and I still wear both the original and the second one often. It was of course one of those loose drop-shoulder ’80’s garments and I just love the way the back hem is longer than the front. The size small still fits me so you can imagine how baggy this was meant to be 25 years ago! Here it is on Debbie Double:

The photo is a bit too light - it’s actually black with grey, white and red woven-in stripes in a lightweight poly-cotton blend. The yoke, collar, pocket and front facings were all completed already. I think what stopped me from finishing this is some anxiety about getting a smoothly turned hem on the curves. So I made good use of my serger and did a 4-thread overedge all the way around and then turned and pressed a single fold which was secured with a line of topstitching. The thin fabric gathered quite a bit even without using the serger’s differential feed which helped the curves to lie flat. It’s not perfect but it’s not too bad either. Better than having the darn thing hanging around for another 6 years! I had a little trouble with the buttonholes however – it seems that I’ve lost my skill with that technique due to not having done it for ages. By the 6th and last one they were turning out much better.

Nice to scratch off something that’s been haunting my studio for so long. Done!

BTW, the prolific and adorable Patty the Snug Bug had a great tutorial on photographing yourself wearing your handmade clothes here. You can tell I’m too lazy and impatient too inexperienced to go through all the steps. For starters there’s nowhere in my house that has a blank wall that gets enough natural light. I don’t have blank walls! I do agree about trying to get spousal assistance which just doesn’t work very well. Perhaps one day I’ll set something up that’s better than just using dear old Deb as my model though.

Anyhow, next we have the knitting: 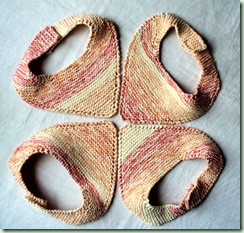 Comments: This is the only thing I felt like working on while I was sick with two nasty viruses. I got exactly 2 bibs per skein with only a few yards left over.

Mods: I made the main section 4 rows longer to make it slightly larger. Also made the straps a little shorter so it will fit a little tighter around her neck.

After all that I realised that I'd used a 3mm needle as the pattern calls for instead of the 3.5mm needle I used last time with the same pattern and same yarn. So these might actually be a little smaller rather than a little larger! Should have read my notes more carefully, huh? I blame the germs that ate my brains!

So now I’m back to slowly knitting on the Abotanicity Tunic. Just like the skirt it will be too warm to wear it once I’m done. Oh well. Onward. Actually out into the garden this afternoon. Yay!

My Gawd, it's my favorite old Big Shirt pattern!! I had a whole wardrobe of them in rayon or silk noil back in the day . . . I wore them with skinny jeans, black stirrup pants, fuchsia leggings or capris!! I think I still have a faded, tatty old number in the back of the closet . . . I must dig that pattern out!! Love the drool catchers!!!

Ah, Sharon. Such synchronicity! Obviously it's a great pattern. I don't think I'll be wearing stirrup pants with this one though. ;)