Summer Is A’Comin’ In And Winter’s Gone Away

Jeepers! It’s May already! Where did April go? Oh yeah, it was eaten by the Green Slime Viruses. How could I forget when they are still hanging around? Ewww….grossed myself out with that image…sorry.

This weekend was absolutely glorious. Sunny, relatively warm and I finally felt well enough to participate in it. Yay! Both on Saturday and on the even-nicer Sunday we got out for walks and also had some quality time in the garden. My kale patch has celebrated its First Birthday: 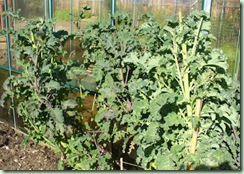 The plants come up to my chin now and are very homely in looks but are producing a bucketful of flower buds every week for our eating pleasure. How come kale buds aren’t available in the stores? You can get the big old leaves but not the much more tender flower buds, picked before the flowers open. They taste much better than broccoli and are very high in all the good things for you. Perhaps people don’t realise they’re edible? Or maybe farmers don’t keep the kale in the ground all winter until they bolt like I do? I harvested some of the most tender leaves quite often even in February. Since this is my first experience with growing kale, I want to see how long they will survive and keep producing! That’s a 3-litre bucket here in case you needed some size context: 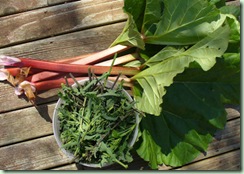 And it’s not the first full one I’ve picked from perhaps a dozen plants total! There’s a few purple sprouting broccoli florets in that bucket as well. I also picked my first rhubarb for sauce. I saved those gorgeous big leaves to use for mordanting a skein of yarn that will be dyed later this week with my Spectrum Study Group. The rhubarb sauce was delicious for breakfast this morning mixed with yogurt (half plain and half lemon) and sprinkled with granola. Yum. Now I’m impatiently waiting on our first asparagus of the season. Lots of spears are showing up but they’re not big enough yet. It’s just been too cold for everything so far.

I did get a few items actually planted into the garden but there’s a lot still waiting in flats in the greenhouse: 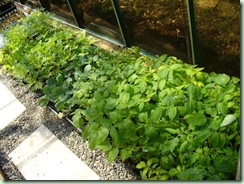 I’m not yet brave enough to leave the tomatoes out in there overnight so it’s the usual daily schlep out and in again. Some of the other stuff can really go in the dirt now but today it’s raining so I get an impromptu holiday. I also managed to get my cucumber and squash seeds planted inside in pots. They won’t go out until sometime in June but at least this way they get a bit of a head start. No, I haven’t planted any beans yet. Not for a couple of weeks still. But my peas are a couple of inches tall! There are gaps in the rows though so I’ll probably have to poke a few more seeds in there. I have mixed up several varieties of snap and snow peas because why bother to grow the kind where you have to throw away the pods?

Of course I have lots more to do out there (barely glanced at the front garden so far!) but it’s kind of an ongoing project. Must pace myself. However I think I really enjoy puttering in the dirt even more than I used to. I guess it’s just become another one of those creative outlets that I seem to thrive on. T-Man is working hard too pruning and mulching and doing all the stuff that’s too hard for me, especially if it calls for Powered Machines! He’s also going to build me a planter box now that he has eliminated some of the laurel beside the veggie garden next to the fence. It’s a nice sunny spot that I’m happy to reclaim. And we both want butternut squashes for which there wasn’t any space before.

OK, if I can’t work outdoors today then I’m off to play in my studio instead. Lots more sewing waiting for me plus I need to wind some skeins of yarn and get them mordanted. Always something exciting to do around here! No such thing as boredom in my world. This pounding headache could go bye-bye now however. Maybe it’s the weather change?

P.S. If you’re Canadian, get your rump out there and help vote that proroguing, contempting-of-parliament, hyper-conservative, creepy guy out of office, please? I’m just waiting for T to get home from work and then we’ll do our tiny part. If you don’t vote, then you can’t bitch.

I have never had kale buds! But then the last time I grew kale I cannot remember. Must give it another try. Last year I fell in love with Collard greens and they are all producing nice tender spring leaves from last year;s plants. Will have to try the buds when they begin to bolt. Voting - I can remember how excited I was to vote when I became of the age to do so.