We had a very pleasant Mother’s Day dinner yesterday. The weather cooperated enough to barbeque the pork roast and it was delicious. We had a really good visit with the family and I got to try the green hoodie on Rosebud: 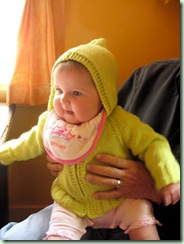 It fits better than I thought it would! The bib kind of spoils the effect by hiding the cute green heart zipper pull but if you look at her drooley chin you will see that it’s a necessary fashion statement. I took a whole bunch of shots all of which seemed to include her tongue sticking out, an expression which translates to mean happiness in Rosebuddian, especially when accompanied by flailing arms and legs. And her grandpa was having a challenge trying to hang on to her. Plus she ended up wearing (and drooling all over) 3 out of the 4 new bibs I made her before they headed home. She’s messy but so adorable!

Unfortunately I made a big mistake and went to check out the damage to my garden from the hailstorm on Saturday. It’s so sad! And very frustrating. So many plants are badly torn and flattened. Here’s the biggest lettuce so you can see how shredded the leaves are: 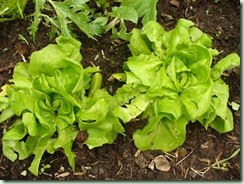 Poor Esmeralda! Hopefully it will recuperate but I’m really concerned about the coreopsis which was even more decimated: 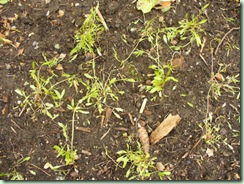 I’ve already planted some new seeds but they will take awhile to catch up. The blueberries lost a lot of flowers and the walnut tree’s unripened catkins were knocked off onto the ground. It should have been a good year for them but now they will be much reduced. The kale of course held up without a scratch. Man, that stuff is invincible! Even the hailstones madly bouncing off the greenhouse roof didn’t hurt them. I think that was the worst hailstorm I can ever remember. It’s the one that affected me personally the most anyway. It was kind of exciting and exhilarating to watch until I realised how much damage it caused to my garden. (And I’m sure others as well.) There were still pockets of hailstones left 24 hours after the storm was finally over.

In the studio I haven’t been sewing like I ought to. Instead I started dumping out my supply drawers. I spent half a day happily sorting the buttons: 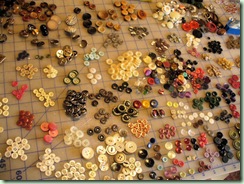 These range from quite new to very vintage to possibly antique. Some are from T-Man’s granny’s button collection which I inherited. Some are from other people’s cast-off collections. A few are from my earliest sewing days or recycled from discarded clothing. And the rest I purchased for various projects and then weren’t used for whatever reason. There are some sets and some singles. Lose a button? I could probably find something closely matching! Now they are arranged in half a dozen old ice-cube trays waiting for a chance to be used. Or passed on yet again.

I also sorted out the zippers and trims, elastics and lace and threw out a bunch of dirty old junk that will never get used. (Have you ever noticed what horrible sleazy fabrics the manufacturers use for commercial bias binding? So much nicer and easy enough to make it yourself.) I bought several plastic baskets from the dollar store to keep everything captured in and they just fill the 2 shallow drawers in my old bureau. The bureau also holds patterns and projects in its 2 big drawers and just fits underneath the slanted ceiling in the south corner of the room. Nice to get it all cleaned out and now I have a better idea of what I have. There are lots more drawers to tackle still so I’m not finished yet.

Speaking of organising, I played some more with the My Stuff app on my iTouch and now have the beginnings of an inventory for my sewing patterns. I experimented with importing and exporting and it worked very well - except for some duplicate entries which were probably my fault for not checking or unchecking an option in the import. Easy to delete them anyhow and I’ll try to figure out how to avoid that next time. Now I can much more easily add items using Excel on my computer instead of thumb-typing on the iTouch screen. The photos don’t get passed back and forth unfortunately so they need to be added with the iTouch, very easy with the built-in camera. However they do get saved with the Backup feature and can be Restored if necessary. My Stuff seems like a really adaptable and powerful database application and you could use it to keep track of anything really. When I’m done the patterns I hope to start adding the fabrics, most of which I already have in an Excel file.

Did you see the latest issue of Threads magazine, #155 (June/July 2011)? They have an article on fabric shopping in Vancouver featuring all my favourite places! The only one I hadn’t heard of was the leather shop. Otherwise they hit all the highlights including Outdoor Innovations (right in my own neighbourhood), Button Button, good old Dressew and my fave magazine shop. If I’d known it featured a photo of Mayfair, I’d have shown it to them when I bought the issue there! It makes a complete circle, don’t you think? Mayfair in Threads in Mayfair…OK, I’ll stop now.

I need to go wash yesterday’s massive pile of dishes. No, I wouldn’t let anyone do them for me. It would have interrupted the fun and anyway I don’t mind.

Oooh....love the buttons! I have an old tin with about 5 decades worth of buttons. No plans to organize them anytime soon.

So sorry about your hail damage.

you mentioned making bibs...I've been busy sewing up baby gift bibs from this online tutorial: Bib-Apron

They come out really cute.

Easy to see why she is called Rosebud!