It was a busy but mostly unproductive weekend just passed. Oh, wait! It’s Tuesday already, isn’t it? It seems like the days go by in a blur. On Saturday T-Man and I went for a drive in the country. Actually we went to not one, but two different RV suppliers trying to find a replacement for our sadly exploded awning for the VW van. We need to be ready for the first camping trip of the season next month. Of course they don’t make the original version any more. So we ended up buying the New! Improved! Much Better! version but alas, after we got it all the way home we found that it’s much too large and heavy to manage. Plus we couldn’t figure out how to properly attach it to our poor bent-up rain gutter even using the old brackets which are not nearly robust enough to hold the weight. So back it has to go. After phoning to confirm that we could return it T finally found out (and why they didn’t tell us in the beginning is a mystery) that they actually still had one of the original perfectly functional awnings available. It’s burgundy instead of blue but who the heck cares about the colour? So because this one is too heavy for one person to lift, I had to get up with him at the crack of dawn this morning to help get the darned wrong awning back into the van. Naturally the back hatch door wouldn’t open (it does that sometimes just to be perverse) so we slid it in carefully through the passenger window! Whew! The one they are holding for us had better be the right one or I’m going to cry. And T is still kicking himself for not putting the old one away that fateful night last fall when we were camping in a volcano caldera. Who knew a big storm would come up while we were asleep sending a massive blast of wind to literally explode our poor old awning? That dumb mistake is costing us nearly $1000 and a whole lot of angst. And several drives out in the country. At least this time he gets to go by himself after work.

I will instead be babysitting cute baby Rosebud today whilst her parents go to their simultaneous dentist appointments. Of course when they made said appointments they hadn’t birthed Rosebud yet so it didn’t occur to them to make them sequential instead. My gain! Also the weather seems to be improving so hopefully I’ll be able to get out for a little session of mucking about in the dirt later on. It’s been so rainy that all I’ve managed to do was to keep the kale buds and asparagus picked and the plants in pots in the greenhouse watered. They are getting pot-bound and need space to stretch out their roots asap. According to the weatherman (who, as we all know lies!) it’s going to be warming up for at least the next week or so. That should give me some much-needed time to get planting.

In other news, remember this pattern from April? 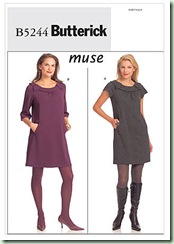 Yesterday I finally finished the 5th new garment in my Wardrobe Makeover 2011, the Charcoal Dress version View B: 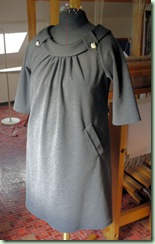 (Obviously I decided that the Black Striped Big Shirt would count as Garment #4!) This is in the same thick rayon/lycra (I think!) double-knit as the Banana Skirt. It turned out pretty well except that I had to tack down the points at the back of the collar. Despite all my best efforts to avoid it, they still flipped up annoyingly until I took a few small stitches underneath. This version is a little longer and less casual than the Green Tunic and I used the pockets and collar as per the pattern. Despite the fitting adjustments that I made (including moving the pockets upward and outward slightly) it looks pretty much like the photo on the envelope. I was going to give you a closeup of the very cool black and cream buttons (bone? horn? not sure) that I found in the Button Stash but my camera batteries died. Oops. I’m going to have to wear this dress several times very soon before it gets too warm for such heavy but very comfy fabric. Notice how that cheeky Debbie Double is always borrowing my clothes?

Next I’m working on adjusting the pattern for another dress: 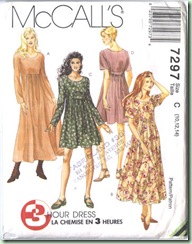 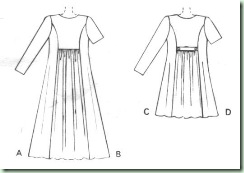 This one is an Oldie-But-Goodie from 1994 that I’ve already made twice in long and short versions. This time I’m trying to make it fit a little closer by reducing some of the fullness and it will be the short version with short sleeves. The fabric is a black rayon with a bit of sheen and a slight crinkle texture. Just about ready to cut it out but that will likely have to wait until tomorrow because of all the plans I have for today already.

Meanwhile in knitting news, I’m on good old Sleeve Island trying to finally finish the Abotanicity Tunic. The lacy skirt is done and now it’s just around and around in k2p1 rib while decreasing down at the same time. Not terrifically portable unfortunately. I can hardly wait to cross this one off my list.