Who Wore Out Whom? 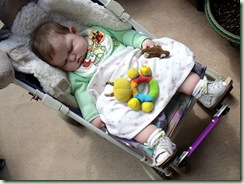 Baby Rosebud and I had a great time yesterday! I can tell because my hands and shoulders are sore from picking her up and carrying her around for about 5 hours. She’s a big girl at nearly 6 months old – plus those boots and her fancy purple bar add even more weight. I just realised that this is the first time I’ve shown off her spiffy new “skateboard”! She has really strong legs from lifting this thing up in the air. She uses it as a counterbalance and can flip from her back to her tummy in the blink of an eye. She also uses it to nearly sit up by herself except for some occasional “stabilizer malfunctions” which are normal for her development stage. Notice the little knitted monkey puppet in her hand? That was a sweet gift from Pearl at Birkeland Bros Wool when we stopped in for a visit. (Thanks again, Pearl!) And of course we made a yarn purchase. I’m rethinking the cardi that I started in pompon sock yarn. It just wasn’t working out so I started again with thicker yarn: SandnesGarn Smart superwash wool in a watermelon red. More on that project when there’s something to show. First I have to frog what I knit yesterday while Rosebud was napping in the stroller and start yet again with one size smaller needle. Sheesh.

What else to tell? Oh yeah. Here’s one of the buttons on my newest dress that I wasn’t able to show yesterday: 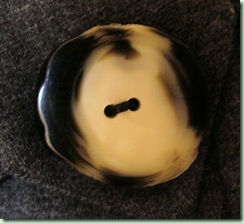 That’s just a bit bigger than life-sized and the other button is the same but a little different in shape and markings. What do you think? Bone or horn? I’m suspecting horn. The shine is a clear applied coating. I have absolutely no idea where I got them or when. Just proves I should keep better notes, huh? The tweedy colour of the fabric is much closer to its real charcoal shade than it appeared in yesterday’s photo.

And there’s more news. While I was babysitting, T-Man managed to sort out the van’s awning problem and now we have a nearly identical new one – just a different colour vinyl – plus it was a lot cheaper than the one that was too big. Although now we realise that our brackets are also bent from the windstorm that broke the original awning and can’t be straightened without a very good chance of breaking them. Cast aluminum is brittle. Hopefully they will still work ok because there are no substitutes available. I’m betting we’ll be a lot more cautious about leaving the awning up overnight in future.

T also managed to stop at Lee Valley and picked up some new drawer handles for me. The two chests of drawers that hold up my big sewing worktable have cheap plastic handles that have gone completely chalky and brittle. (Gee thanks, Ikea. Not.) These new antiqued copper ones are really nice – even if they did cost me over $40 for the 16 that I need which is probably half the worth of one of the chests. On the negative side, the screws are 1/8” too long and need to be ground down to fit which won’t happen quickly. AND one of the packets came without the screws which had escaped through a hole in the plastic bag. Bleh. Why can’t anything be simple? Looks a lot nicer though, huh? 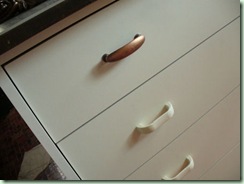 Unfortunately, my current run of rotten luck has not given up yet. This morning I made the mistake of washing my old dusty dirty and very yellowed handwoven curtains from the bedroom and the slightly newer ones from the upstairs studio and study windows. It was a big mistake because the bedroom curtains began to disintegrate in the wash and are now full of holes! And not the lacy woven kind of holes either. I know where I went wrong of course. Last time I washed them (and I’ll reluctantly admit that was at least a couple of years ago) I used that nasty evil chemical known as chlorine bleach. It not only broke down the cotton/linen yarn but also yellowed badly the natural white colour of the curtain fabric. And stupidly I didn’t use anticlor (sodium metabisulphite) afterwards to neutralise it. Doh. I even have some in the dye cupboard. Remind me to completely avoid that nasty bleach stuff in the future, will you? I’m super sensitive to it anyhow. Now I have to seriously contemplate substitute curtains for the bedroom – at least until I can weave some new fabric which probably won’t be until next summer at the rate I’m going with my current projects. Sigh. At least I have suitable yarns in the stash! I’m thankful that the upstairs curtains are unfortunately still somewhat weather-stained but functionally ok – except for being covered with cotton and linen lint.

The weather is lovely today. Too bad I won’t be able to work out in the garden for very long because I’m already sore. I’ll make a stab at it anyhow because there’s just so much to catch up on.