My Japanese indigo, known as “ai” in Japan, has been doing quite well in the dye garden despite the rather disappointing summer weather. 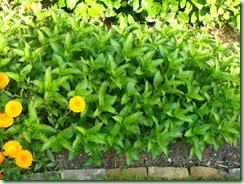 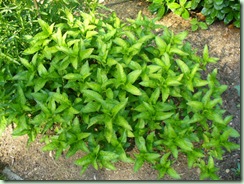 (The flowers are calendula sneaking in.) Persicaria tinctoria (aka Polygonum tinctorium) is in the buckwheat family and although it likes sunshine and some heat also needs constant moisture to grow well. Both patches, the one planted before The Hail Storm (left) and the one planted after (right) were knee-high and I thought it was time to try harvesting some to dye with. Looking up all the information that I could find, both online and in my personal library, gave me such conflicting advice on how to go about it! I figured I had lots though so could afford to play it by ear. I already have had several years’ experience with woad to draw upon and hoped that would help. Ai has more indigo precursor in it so it should be even easier, right?

My friend Kirsten came over to play too and we picked just over 500g of leaves. Sources varied on what and how much to pick so I compromised by choosing the lower leaves and some of the upper ones leaving a topknot of the newest ones to continue growing. They look a bit silly now: 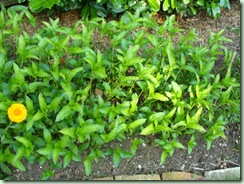 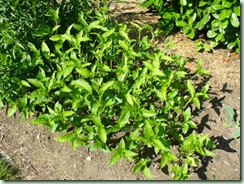 I think they’ll get over it. Eventually. I found a couple of leaves that had been accidentally hit by the weedeater that showed dark blue on the edges. A good sign! We washed the leaves and covered them with cold water in the dye pot: 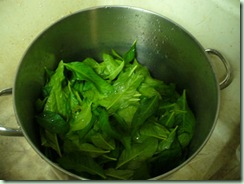 This is a departure from woad where I would have added them to boiling water. Instead I brought the ai leaves slowly up to barely a simmer (around 70C) until they changed colour and looked “cooked”. This process took around 45 minutes or so. Next, instead of quickly cooling to 50C before removing the leaves and adding the soda ash (3 tsp), we carried right on with the hot solution. Kirsten generously gave me her old stick blender for the dye studio and we used that to aerate the dark brown liquid. The bubbles turned blue almost immediately but we kept it up for awhile and then switched to dumping the solution from one pot to another just to make sure we got it oxygenated enough. Then we added the thiourea dioxide (2 tsp), wrapped the pot in towels to keep the heat in (it was still quite warm, over 55C) and went to have some lunch on the deck.

When we came back the vat looked and smelled quite good. The temperature was still warm and there was a thin indigo “flower” on the surface: 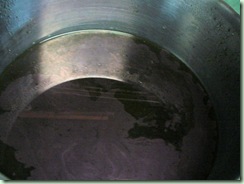 So we started popping things in! I was determined to dye my Amiga sweater but held off until Kirsten put in some crocheted cotton lace as a test: 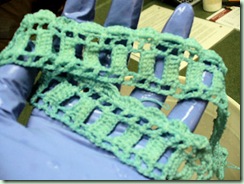 It took quite awhile to oxidise to blue – much slower than I’m used to with woad. It stayed turquoise and didn’t develop true blue for at least 10 minutes. Interesting! I did three dips on my sweater, airing as long as possible in between: 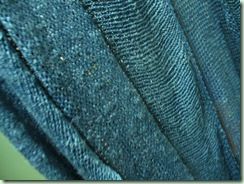 Here it’s still wet. We also dyed and overdyed several skeins of yarn: silk, cotton and rayon. The pot was pretty depleted by this point: 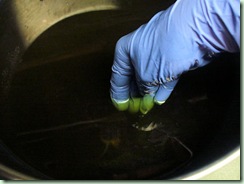 But I tore off some of the weld-dyed wool fleece (from the last dye session) and threw that in at the end for two last dips. I wanted to see how the weld overdyed: 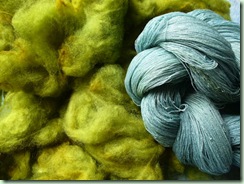 Lime green! The rayon skein that was dyed after my sweater never did lose it’s hint of turquoise. It reminds me more of woad than regular indigo. I let the sweater oxydise for 48 hours before rinsing: 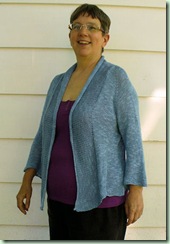 It didn’t turn out very dark but it’s quite even and I love this sweater! For all of its airiness it’s rather cosy and comfy. For some reason the sleeves blocked out bell-shaped though they were knitted straight. I might be inspired to make something else from this rayon slub yarn now that I’ve seen how nice it comes out in the knitting!

We dyed approximately 400g of fibre in total. We never did get a dark blue from this ai vat but I suspect that’s because the weather hasn’t been consistently sunny this summer and the nights are definitely cool. However it seems like quite a promising dye plant, being easy to start and grow and no harder than woad to extract. I should have at least one more chance to play with it this year. Now if I can only get some seeds to develop before frost I’ll be very pleased indeed.

Nice!! Your sweater turned out REALLY well. Lovely pattern and you look lovely in it!

Love the color of your sweater!! Love the sweater too!!! Never heard of ai before - I'm so glad you like to experiment.

the colour of the sweater is lovely.