My Spectrum dye study group came over on Thursday and this time we played with logwood. I hadn’t had time to mordant anything so luckily I discovered a couple of skeins of silk weaving yarns that had been pre-mordanted – probably years ago now. One was a bombyx silk skein that was a little stained and fragile so I have no idea if it will hold up to use. Perhaps as a weft but there’s not enough for even a scarf length. The other skein was a larger one of tussah silk. We used 200g of logwood sawdust and that was probably way too much, even for 5 or 6 people’s skeins! I divided the extraction pot after we sieved out the sawdust into 2 pots. One had more logwood in it or we didn’t stir it up much before pouring because the dyed yarns came out of it darker and more navy than purple. The other pot was a little lighter and with more of a purple tint. Here’s my two skeins, one from each pot: 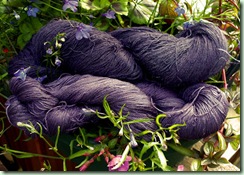 They’re actually even darker than they look in the photo! Logwood usually isn’t too giving of exhaust baths but the second batch came out a lighter violet and quite pretty. Sorry I didn’t take any photos at the time! Now I still have 2 pots of nearly exhausted dye sitting down on my dye stove waiting for me to either put something else in or dump them out. I’m leaning toward the dump idea. I also still have the logwood chips which may or may not give more colour. Perhaps I should try another extraction, add that to the combined exhaust pots plus some alum (since I don’t have anything else that’s already mordanted) and see what I get? It’ll probably have to wait until tomorrow though before I have some time to hunt down some more yarn and play with the leftovers.

I’m actually not a huge fan of logwood. It’s pretty in a muted sort of way but it does tend to fade to brownish tones if you aren’t careful to keep it out of the sun and to wash it in neutral detergent. Apparently a little iron mordant helps but it tends to mute the colours even further and it’s so easy to use too much and get greys/blacks instead of purples/blues. Unless of course that’s what you want! I believe logwood-dyes yarns are best used for accessories and garments that are worn and washed only rarely rather than wall pieces or household textiles that would see a lot of light and use.

The rinse-out of loose dye can be really tedious with logwood. It has been suggested that leaving the dyed yarns to oxidise for a couple of hours to a couple of days before rinsing can help set the dyes in the fibre. I plan to try this next time! I did a little googling around and found an interesting technical document on industrial dyeing of black colours with logwood extracts. It’s a bit difficult to understand some of it (at least for me!) and you couldn’t use the same chemicals or processes in a home environment (for instance chrome is the main mordant) but it does mention that logwood will dye nylon and acetate as well as wool - and other animal fibres including ostrich feathers, pig bristles and horse hair, silk, cotton and jute. If you’re curious, see what tidbits you can glean from this file. Here’s one that I found, though I wasn’t able to locate exact percentages to use:

“For the dyeing with iron, copper and oxalic acid. Bring the bath
containing the wool, the Logwood and the oxalic acid to boiling temperature and maintain it at 95/98°C during ten to fifteen minutes. Then let the temperature drop naturally to 60/70°C in twenty minutes just by stopping the steam and keeping the bath moving. One can then add fixing salts (copper sulphate and ferrous sulphate, beforehand dissolved in soft water) and bring the bath back to boiling temperature which one will maintain during forty-five minutes to one hour: enough for the complete development of the black on wool and the progressive exhaustion of metallic salts. This can be observed by the successive colours of the bath: from gold
yellow to brown ale, then back to pale gold yellow at approx. pH of 3,5. After the dyeing operation, the dyed wool should lay down or drain during at least two hours, so as to help the oxidation and to obtain, with the rinse, little coloured water.”

Quite a teaser, huh?

I’ve decided that rather than my recent propensity to write super-long posts with big gaps between them, I’m going to break things up a little more and post more often. We’ll see how long that promise lasts, shall we? Meanwhile I need to go clean up my kitchen. For some reason I have been avoiding the dishes for a couple of days. Yuck!