It’s somewhat later than usual but we are finally enjoying our Annual Strawberry Pigout: 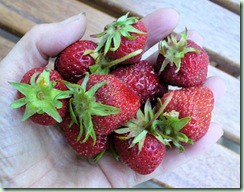 These are some of the ones I had for breakfast this morning. Delish! We don’t grow them anymore ourselves but the local strawberries are such a treat – nothing at all like the huge flavourless strawberry-shaped rocks from California (no offense to those hardworking growers). You can smell the ambrosial scent from their baskets as you walk by the market! Smaller but deep red all the way through and they only last a few days in the fridge so you have to use them up quickly. Absolute Essence of Strawberry-ness. We don’t eat jam and I never remember to use them frozen so we usually just wolf down as much as possible while they are in season. Quickly followed by the Annual Cherry Pigout and later the Okanagan Peach & Apricot Pigout…happy sigh. We also plan to make a lot more of those cherry “raisins” in the dehydrator this year. They were so yummy on cereal in midwinter.

This is the way folks ate in the Olden Days before refrigerator trucks and bulk imports from warmer climes. You just ate up what you couldn’t preserve when it was ripe. Even if that meant having the same thing at every meal for weeks! Then you had to wait until next year to enjoy it fresh again. Though I love the modern ability to have fresh produce available in January (such as local greenhouse peppers and mandarin oranges, which of course don’t grow here), there are some things that are just worth waiting all year for. We’ve been anticipating fruit season for months now! In our garden the raspberries are ripening now but the blueberries are way behind and the blackberries are still just flowers.

Just thought I would also show you how the dye garden is growing. Here are the 2 kinds of calendulas (aka pot marigolds): 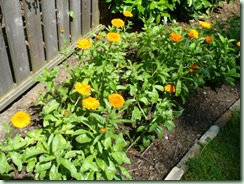 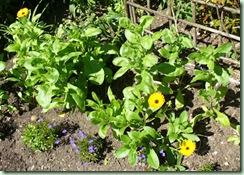 The first variety has larger variable single and double flowers and the second ones lighter and have pretty dark centres. I’ve already been drying some of the petals but there’s not nearly enough yet even to dye a small skein. Lots of buds however! I’ve never used these before so it’ll be interesting to see what colours I can get. Perhaps I should try the two varieties separately? Though they’re going to have to give me a lot more flowers first.

Another more traditional yellow is the weld: 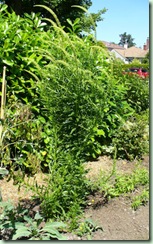 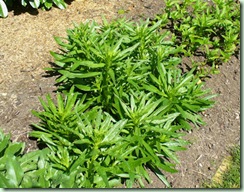 The big second-year plant is taller than I am! And nearly ready to harvest, I think. The ones I planted this spring are all bolting so perhaps I should start some new ones though I’m not having good germination with the purchased seeds and sadly none at all from those I saved from last year. I may not have left them to ripen long enough. I still haven’t tried dyeing with my weld yet but I only had one small batch from last year that is all dried and bagged. The plants smell distinctively pleasant both fresh and dried, like grassy fields. I’ll soon find out what the dyebath smells like!

Next for golds and greens are the marigolds: 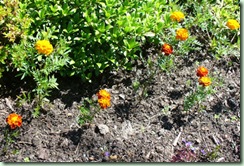 They’re rather spindly still due to being held too long in pots and also from the cold spring weather and the depredations of hungry slugs. I have patches of these all over the garden and already have a handful of spent flowers in the freezer. I try to keep them well dead-headed. Wonder if the slug slime adds to the colours I get? Probably not, huh?

Here’s the coreopsis for oranges, rusts and yellows: 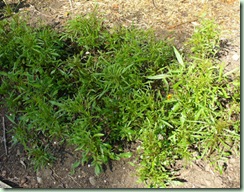 You can just see one tiny flower so far. They are very small still and probably were the worst damaged by the violent spring hail storm so are taking a long time to recuperate. I have a second planting too but it’s even smaller. I’m still anticipating lots of flowers eventually.

For reds and oranges I have good old madder: 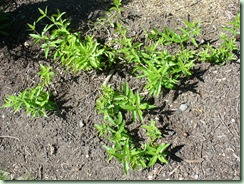 The patch is pretty small because I only had 5 good crowns when I turned out my old galvanised buckets that used to hold my madder. This is their first year after surviving winter so it’ll be a few more seasons before I can harvest the roots. I’m trying to expand the amount by encouraging the fallen-over stems to root. They definitely look better so far than they did in the pots last year.

We have the yellows, oranges and reds and now to the blues. First woad: 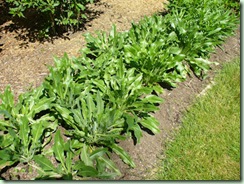 It’s doing quite well except that at least 4 of the plants have tried to bolt on me, just like the weld. (I chopped their heads off!) And we won’t even discuss the disappointing Chinese woad that completely bolted when it was still little. I have 4 new plants but they are very small. The regular woad will be ready for a first harvest if as soon as it gets some good hot sunshine. Today is perfect. More please!

Then there’s my first experience with Japanese indigo: 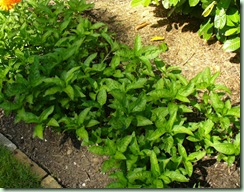 It’s looking pretty healthy and nearly up to my knees but I don’t think it’s ready to harvest anything quite yet. Like the woad it also needs some hot sun. I have a second younger patch as well, planted when I wasn’t sure about the hail damage. It’s nearly as tall as the first planting now. I have to keep these guys watered because they don’t like to dry out at all.

Obviously I have the makings here of a whole rainbow of colours, don’t I? Plus there are other things like the walnuts and blackberry shoots as well. Anybody know if yellow-orange alstromoeria (Peruvian lilies) produce any colour? I have massive heaps of them (actually an annoying weed that pops up everywhere!) and they are just starting to flower. There is no information anywhere that I can find so I’m guessing they aren’t a good dyestuff. Of course I could always give it a shot anyhow. What’s to lose but a few weeds? Very pretty weeds they are too – at least for the few weeks while they’re in flower.

Your garden is enviable. Mine was so set back by the cool weather, but the last week has just made everything leap up. The baby socks are the cutest ever, and by the time your beautiful shawl is finished you won't even remember the wee glitch.

Ah, if only there was but one wee glitch in the beginning of the shawl. However, I've passed the critical point now and it's going along much better. This thing actually gets easier as you go and the rows get shorter! How novel.