Some among us have become such media junkies that we never have time for our own evolution. But there's a big difference between leafing randomly and going on purposeful searches for personal ends. The Internet is the new reality of experiential study. One thing leads to another. Quality can find quality. The ready mind is readily enriched. Creative evolution speeds up. Dreams may be sooner realized.

I am so envious of those who are just learning the textile arts (or anything really) today with so much information available so easily. When I got my first clunky spindle and greasy carded fleece (ick!) back in the Dark Ages  of the mid-1970’s, all I had to help learn how to use it was a little photocopied pamphlet with a few pages of vague instructions. I’m surprised I stuck with it! Today through the magic of teh interwebs you can find how-to videos, sources for fibres and equipment, inspiration and even mentors and friends. It’s amazing actually. Such a rich resource.

Some of my friends tease me about how much time I spend on the computer. Little do they know the truth! I’m getting an education that costs very little and can follow my interests wherever they lead me. It’s an enjoyable way to learn – for me anyhow. YMMV (Your Mileage May Vary) as they say. And I do have a life outside the electronic one! You can tell by my fat notebooks where I keep the printouts of information on each year’s crafty accomplishments. Can’t do all that stuff while sitting in front of a screen, now can I? Well, maybe some of it…

So, yesterday at Spectrum Dye Day we played with quebracho extracts: red, yellow, brown and black. These were mostly older dyestuffs (1990’s!) from Michele Wipplinger before her company Earthues got started. They now only list red and yellow and Maiwa only lists quebracho without saying which species. The name means “break-axe” because this is a very hard wood that grows in the Gran Chaco area of South America. The trees are selectively harvested from tree farms so using it doesn’t contribute to deforestation. It was historically used as a tanning agent as well as a dye. Using the recommended 8-10% gives a rather muted palette especially on cellulose fibres. We used a stronger 20% and got these pretty colours on silks and wool: 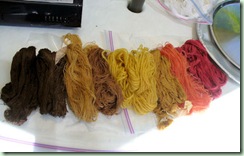 From the left: black, brown, yellow and red quebracho. Silk seemed to take the dye the deepest. We dyed the cellulose yarns separately after the silks and wool and they remained at Sandra’s in the pots so I don’t have them to show yet. I also left her another set of skeins (mine were all rayon) so she could pop them in the exhausts afterwards to see what lighter shades we can get. It’ll be fun to see how much different the cellulose is than the protein fibres. Quebracho is recommended for cellulose due to its high tannin content.

I’m also going to have a Woad Dye Day next Thursday. It’ll be interesting to see if the blue suffered because so many of the plants were trying to bolt from the crappy weather this summer. I feel like the Red Queen because I kept chopping their heads off! And also whether it was affected by the lack of sunshine like the Japanese indigo seemed to be. Every year is a different story with my dye garden. So far I’ve hardly even had any flowers on the very late coreopsis. Last year I picked buckets of them! The bolted weld is now taller than I am and I only have 2 teeny little rosettes from self-sown seeds which won’t be ready until next year. The madder is doing very well now that they’ve been freed from their buckets, except that they are being plagued by ants and their herds of black aphids. I keep washing them off but they keep coming back, the darn critters. I have some flowers on them now and maybe I can get seed to try to increase my madder bed. Never a dull moment in Damselfly’s Pond!

Great colours. Have fun on Woad Day!
And I do spend a little too much time online, but it is a fantastic resource, especially being in a remote area where I can't just run down to the library and check something. I even learned how to fix my knitting machine from a YouTube video!

Whoo-hoo! Great use of the technology, I'd say! My dream is to have world-wide wifi. lol