Granny Time with Rosebud, the Littlest Grandbeastie, went really well yesterday. We had a very fun time together! We played with toys, practiced important skills like “put it in the box” and “walkies holding hands” and “I stack ’em and you knock ’em down”, and snuggled while she had her bottle. She even napped for an hour. Such a sweet baby. Hard to believe she’ll be a year old next month. Time flies, huh?

So I think I’ve solved the tights-eating tendencies of my new boots. I found this pattern on Ravelry by Joan De Lurio. She calls them Boot Buffers. I scrounged around in the stash and tested the pattern with my old green handspun and came up with these: 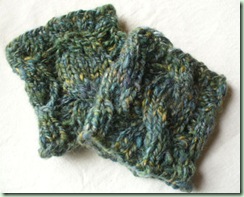 Perhaps a little snug and maybe too short. This yarn isn’t bulky enough. These may get frogged after I test them out for awhile to see if they slip down. So then I scrounged around some more and came up with 2 different black worsted-weight yarns and modified the pattern a little: 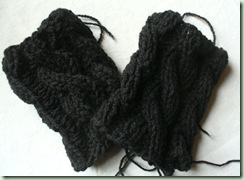 I used both yarns together, added an extra purl stitch between the ribs and repeated the rib pattern one more time to make them a little longer. So far I like them better than the green ones. I still have to darn in the yarn ends.

I also saw that someone had made more of a fold-over cuff version so I invented these on the needles: 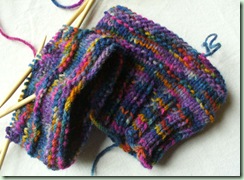 I used a skein of hand-dyed gray worsted wool and 5.5mm needles. I hope to get photos of these in my boots so you can see how they work. The wider cuff edge folds over the outside of the boot top and the rib hugs my leg inside the boot shaft. But I’m not yet sure how well they will stay put during a long walk. They are currently in Test Mode. I’d certainly rather chew up old yarn than new tights.

In other news, the important thing we accomplished yesterday was to get our credit union accounts unlocked after Tuesday’s lost wallet fright. They were very good about it and made sure T-Man showed his ID before reinstating everything. Just in time too – we had to go pick up the Westphalia after getting her windshield with the new rubber gasket replaced and needed to pay the $200 insurance deductible before they’d let us take her. The broken headlight lens has also been replaced so apart from needing a good wash, she’s all fixed up now. That was an expensive couple of rock pings we picked up on our vacation! At least the insurance paid for most of it. Unfortunately it’s getting harder to source parts for a vehicle that’s nearly 23 years old.

Later this afternoon T-Man & I are off to Circle Craft’s Christmas Market. This is a huge and rather prestigious craft sale that includes demos and entertainment and we haven’t been for a couple of years. At least I’ve already bought the tickets online so we can’t procrastinate this time! We have no plans to buy anything at all but we love to play lookie-loo. Besides, I know at least 2 of the vendors personally so it’ll be nice to say hi. Have I mentioned that I used to work at Circle Craft in their Granville Island shop? I recently realised that was over 20 years ago now! Yikes.