T-Man and I had an adventure yesterday afternoon. First I’ll list the changeable weather: raining hard all morning, stopped in the afternoon, then hail along with a crash of thunder, wind picked up to gale force for a short time as finally the sun came out but it was still quite windy all evening. I mention this because it was quite spectacular! The wind was so strong that it created a blizzard of fall leaves and nearly denuded some of the trees in moments. We were due to walk down to a newbie spinner’s house to check out her borrowed spinning wheel. Luckily the timing worked well and we missed the worst of the wild weather!

However, on our walk down to Strathcona (one of the oldest neighbourhoods in the city) we saw a parked car that had been squished by the weight of half a sweetgum tree that landed on it. The police were there taping it off since the tree covered the road. Who knows if the poor owner even knew yet of his/her car’s misfortune. Elsewhere we only saw a few small branches down while the wind was making the most amazing drifts out of all the gorgeous leaves. They were literally dancing! So fun to watch. Sorry I didn’t take a video.

Now lets talk about the wheel. E didn’t know what she had acquired so T and I didn’t have a clue what to expect. I was surprised to see a Canadian Production Wheel, stamped (in a number of places on the table) “Frs. Bordua, St. Marc, RC” and including the letters FB on the cast iron support for the mother-of-all. Obviously they wanted you to know who made it! Unlike some wheels where it becomes a sleuthing ordeal requiring Holmsian skills to deduce the provenance. To wit: I never did find out anything about the decorative little parlour wheel I have.

This one was easy-peasy. This morning I just googled the name and it pointed right away to an antiques website with the answer:

“The makers of this spinning wheel were a well-known Canadian family. The two brothers, Francois and Frederic, and Frederic's son Theodore, were builders of this style of Canadian Production wheel (CPW) in the late 1800's and early 1900's. These were made in Quebec, Canada (Ste Hyacinthe, Ste Marc, Ste Charles).”

I borrowed a photo from someone (since I forgot to take one of E’s wheel). This one is quite similar: 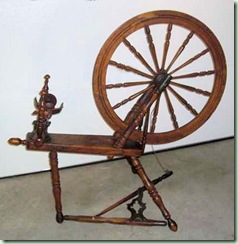 Isn’t it lovely? Distinctive characteristics are the large wheel diameter, iron treadle and mother-of-all support, wire footman and bent wire hooks, and a non-functional knob on the end of the table. E’s wheel had a little damage to the wheel rim and treadle bar but was otherwise in pretty good shape. The only real problem was that the bobbin was entirely seized to the flyer with old gunk. It took a while to loosen and clean it and we didn’t want to force the whorl off since we weren’t really sure how it was attached: pressure-fit or screw-threaded. It turned out to be screwed on and T finally got it to release so he could scrape the flyer’s rod and the bobbin ends clean. A lot of oil was applied to all the parts and a new double-drive string put on and now…she works just fine!

The tension adjustment is a bit fiddly. You have to turn a wing nut on the mother-of-all’s iron support to loosen the whole mother-of-all and then manually twist it closer or further from the wheel. Then tighten the wing nut back up again before it slips out of position. However, since it’s a double-drive wheel it doesn’t need such delicate adjustments as, say, a Scotch-tension would. It has quite a definite draw-in and a large ratio so it was made to produce fine strong weaving yarns quickly. However the bobbin is quite small and there’s only one of them (of course!) so a lot of winding off will be necessary. E will have to learn the skills to conform to the wheel rather than the other way around. Good practice.

Isn’t it satisfying to give an old wheel a new life? I was really happy that it wasn’t a “junker”! That has happened all too often when someone asks me to help them get an antique wheel going. Either something is broken or missing or it just doesn’t work well because it wasn’t made by someone who knew what they were doing. There are a surprising number of “decoration” wheels out there. Often lovingly made by a woodworker without the necessary knowledge to make sure it functions as it should. I once came across one without even an orifice for the yarn to travel through! It was just a solid rod. The wheel treadled around but that was the limit of its abilities. So sad. I have a junker in my closet right now and just haven’t gotten up the guts to dispose of it yet. I certainly wouldn’t wish it on any poor spinner. It’s impossible.

Of course missing or broken pieces can be repaired but you have to decide whether it will be worth the effort first. T-Man has always promised that one day he’ll restore the little parlour wheel.  It has a quite a lot of damage including fancy turned bone pieces to repair and a bunch of little dangly bobbles missing under the table. Unfortunately I never got the distaff that the original owner promised to locate. We’ll have to imagine what it looked like to reproduce it. Might be a fun project for him after he retires.

Hurray for a rescue! Your friend is going to love it, these wheels just fly! She might like to check out the CPW group if she is on Ravelry. I have a recently acquired Bordua which is nowhere near spinning condition yet, it is nice to hear of one that needed so little work.