The weavers’ guild Christmas party went really well and was a lot of fun. I got to knit for awhile at the executive meeting and then spent an hour or so working (not hard - mostly yakking) in the library. We library people got upstairs just in time to put out our potluck finger food and join the circle of chairs. I brought celery stuffed with Herbie fresh cheese (from Little Qualicum Cheese) just to be sure there would be something that was veggie. As opposed to all the tiny quiches and crackers with spreads, not to mention the many sweets! As usual the grapes were swimming in the cantaloupe juice on the fruit plate so I couldn’t have any. (I’m allergic to melons.) I indulged a little in the carb-loaded goodies but I really should be more careful. I’m starting to put on a little fluff again after being stable for a number of years. I think it’s mostly because I’m not paying as much attention and eating more of the things that I should avoid. It’s not like I’m not getting enough exercise!

So anyway, now I can show off my gift for the exchange. 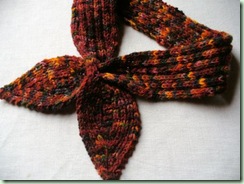 Comments: I wanted to use up this handspun 3-ply which has been lurking in the stash for so long I don’t remember making it! This was the perfect pattern but it only used up half the yarn. Perhaps I need to make another one. It’s a very quick knit. I needed a fast gift for my weavers’ guild Christmas Exchange.

I made the buttonhole larger because I was afraid the end wouldn’t fit through but think I could have left it as a 2-st buttonhole. Why do the instructions include a button? It’s not illustrated with a button. I think it’s also a bit long if you want a tight loop around your neck. The centre rib part could be shortened by a couple of inches. Someone on Ravelry suggested beginning at the narrow part just above the leaf so that the join isn’t at the back of the neck. I didn’t find that it showed very much at all, but that could be because of the variegations in the hand-painted handspun.

My scarf was won by Anita. I hope she enjoys it! She’s a handspinner and knitter too so I know she will appreciate the work. In turn, from Solveig I got a nice blank card (with handwoven fabric and buttons), a small soap and a pair of little balls made from Japanese chirimen fabrics as a decoration. She didn’t make any of these herself though. Sorry it’s too dark to take a photo. Is it just me or does everyone have a hard time actually using those nice art cards? For one thing, I so rarely send anything in the mail these days. Even birthday greetings to my siblings are emails. Yeah, I know. Bad Damselfly.

Speaking of which, I guess I need to go wash the two days’ worth of dishes that are piled all over my kitchen. I’ve been avoiding the housekeeping and being lazy instead. Only when the kitchen is clean will I allow myself to head up to my studio where my Minoru Jacket is waiting ready to be cut out. (So exciting.) Sometimes you just have to be firm with yourself, don’t you?