So how’s it going with you? Are you fed up with the holiday prep yet? Are you anxious and stressed? Or serene in the knowledge that you’ve got it licked this year. As you might know if you’ve been reading here for awhile that I am Mrs. Damselfly Scrooge and I bah-humbug all over Christmas. Not really, but I just can’t deal with the hype and the inflated expectations so I just ignore as much of it as possible. Although I was brought up Catholic, I haven’t believed in religion of any denomination since I was 13. (I won’t go into why because I know I’ll offend someone.) So the “real” meaning of Christmas is lost on me and all I can see are the huge overwhelming sales pitches and the unrealistic expectations. Bleh.

This year though it all seems a little subdued in some ways. The free biweekly newspaper still comes with pounds of flyers but I’m not seeing as much over-the-top decorating and in-your-face marketing going on in the shops. Even the seasonally-appropriate music isn’t nearly as annoying as usual. And most actually waited until well into November before ramping it up. Even folks putting up the lights in my neighbourhood seemed to happen later this year. Of course I just might not be noticing these things since I’m making a concerted effort to stay away from shopping malls! Either that or I’ve finally developed a more serene attitude.

OK, Yearly Rant Against the Inevitable over. On to the latest Finished Object. 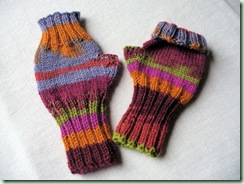 Pattern:  My own, created on the fly. See my Ravelry page for pattern instructions.

Comments:  These are so cute! I had a special request for mitts to keep Rosebud’s hands warm on winter walks in the stroller. She still sucks her thumb so I thought a fingerless version would work best. Since I couldn’t find a pattern that I liked, I just made these up as I went. I didn’t like the thumb treatment at first thinking it was too tight so I pulled it out to fix it. Now the thumb openings are more similar to my favourite Jacoby Mitts. The high ribbed tops can keep her hands warm but still be folded down for finger access.

So far these haven’t been put to the baby test! They also need her auntie’s mitten clips to secure them to her person. However, if they work out OK I may be making more pairs. At least they’re quick now that I have a pattern.

So why do you think she might need sucky mitts? 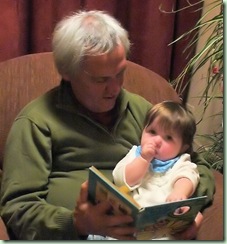 I’ll post the second FO sometime after I gift it tomorrow. Which reminds me - I need to package it up still. I’ve also been plugging away on my Madder Rose Shrug. It’s the only knitting going right now so unless I cast on for something new, this is it! At least I’ve gotten into the body and established the rib pattern. It needs a marker to distinguish the centre stitch turning point and then it’s pretty mindless.

In sewing news, I’m ready to cut out the Minoru Jacket. I spent awhile tracing off the pattern first. It was refreshing to need so few adjustments but I don’t like to cut up the original pattern sheets. The Sewaholic patterns come in sizes 0-16 with all sizes on each pattern piece. That makes for a lot of lines to follow for your size. Plus the print is quite light and the lines are fine so it was easier to trace off my size, including my waist-widening and sleeve-shortening, onto fresh tissue. I could mark the seam allowances and check the measurements while I was at it. I also traced a pattern for the inseam pockets that I want to add.

In tracing off the pattern I was even more impressed with Tasia’s pattern-making skills. The reason why the lining pieces are printed separately is because they are not exactly the same as the main pieces. The lining has a little more width and the armholes are cut a little higher to prevent the outside from puckering. Elegant. The instruction sheet is pretty succinct but the illustrations seem clear. If anyone feels nervous about sewing this garment up, Tasia will be having a sew-a-long in the New Year. Her sew-a-longs are really well illustrated and she takes you through everything step-by-step. I’m not going to wait though. I want this jacket asap. I think I can handle it on my own. Heh.

Unfortunately my Minoru (which I immediately recognised as named after a park in Richmond, BC, and yes, I’ve been there!) is going to have to wait until later. I have to go get my hair cut and fetch some groceries first.