Well, I didn’t manage to get anything done that I’d planned yesterday. I did find a great tutorial from Chance of Rain (aka Sai in Madrid) for the tailor’s ham I wanted to make - complete with downloadable PDF pattern. But I didn’t even dig out the fabrics for this yet. I know. Today is another day, right?

Instead I got hung up on this pattern: 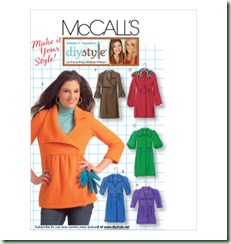 I’ve had this one for several years (M5714, currently OOP) along with 2 metres of well-aged black polar fleece and I wanted to make the jacket with the funky collar, View E (the orange one) but with longer sleeves. Quick while it’s still cool enough to wear it before summer sets in. Unfortunately this pattern is drafted with a “young modern” fit which is very close to the body and even the largest size 18 doesn’t have enough ease for me. Except of course in the shoulders which are, as usual, too big. And the empire line is too high in front because hey, it’s drafted for several bust sizes smaller than I am. I would have to completely adjust the darn thing everywhere to make it fit. I’ve had it with that. It’s easier to start from scratch with my fitting blocks. Seriously. Remind me again why I even buy patterns any more? Oh yeah. I don’t. I’m on a pattern-buying moratorium. I solemnly vow to make my own from now on. You, dear readers, are my witnesses.

So while I quite like the asymmetrical collar, I think it would be a bear to sew in thick polar fleece. Two layers of fleece plus interfacing? Then attaching that to the neckline for yet another layer? Even my workhorse Pfaffy would have trouble biting into that. So I’m kind of rethinking the design to simplify and eliminate layers of facings. Fleece doesn’t ravel. Who needs edge finishes? Go deconstructed! That worked just fine for my Shawl Collar Vest, which FYI I’m currently wearing. (It’s toasty warm too.) So now it’s back to the drawing board with this one. Literally.

Nothing else exciting to report. I didn’t get around to any planting either in the garden or in the grow-op yesterday. The day just zipped by while I was pondering the above sewing problem. In Knitting News I’m still slowly plugging away on my two Ten-Stitch Blankets. It’s not fast but it’s mindless which is very relaxing. However I spend nearly as much time winding new balls of sock scraps as I do knitting on them.

Also I’ve been feeling marginally better and at least have stopped taking cough medicine before going to bed. I still cough a little but I was doing that anyway so there’s no point dosing myself up with unnecessary non-functional potions. I’m well into week 3 of the Zombie Plague and I have one week to go to get rid of this thing before a major dental appointment. Otherwise it’s going to be very uncomfortable all around. I wonder if the dentist has a magical temporary cough-fixer numbing spray or something? He must run into this problem fairly often, one would think.

Yup, I agree with you - polar fleece doesn't need ANY edge finishing unless you want to add a decorative blanket stitch! I've often thought about drafting up my favorite kimono KNITTING pattern & doing it up in fleece instead of all that knitting!!!