It’s kind of dark and dreary today, raining on and off, so I thought I’d carry on with something a little brighter – red! 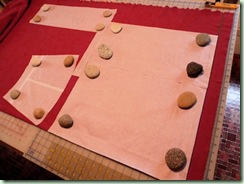 Why do those glacier-smoothed rocks that I use for pattern weights thrill me so? They bring a smile to my face every time I use them as I remember the delightful places where they were collected. But I digress. This lovely red stuff is the cotton/lycra interlock that I’m using for the lower half of the Two-Fabric Dress. I finished the pattern and cut out the ribbing for the top part yesterday. Yes, I did add little sleeves. Just because. And I had enough fabric.

This fabric has very interesting selvedges: 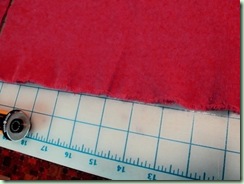 Want to see that closer? 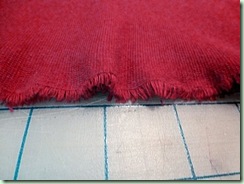 They are so wavy that I have to keep several centimetres away from the edge for fear of having some very oddly-shaped garment pieces. Luckily I have lots of fabric – even taking into consideration a second top from this piece. Perhaps I can incorporate the funky selvedge into the second garment somehow. I’ll have to ponder that one. I really enjoyed making my own pattern nearly from scratch and it didn’t take long at all. It was more fun than trying to fit a commercial pattern anyhow. I used my own stretch bodice block, the neckline from my Tie-Dye Tunic, my stretch sleeve block and a ruler. The most complex piece to draft was that fan-shaped pocket which just took a little slashing and spreading. Easy-peasy.

It’s so empowering to create a personalised version of something that I see rather than depend on the pattern companies to come up with something I like. Even the independent pattern makers are mostly out for me. There’s a list of North American ones courtesy of Sewingplum here but there are others too. I’m not really enamoured of most of the offerings. (A pleasant exception was Sewaholic’s Minoru jacket.) And some on that list are still offering patterns that have been around so long they are no longer, ahem…cutting edge. And then I still have to make them fit me. Because, hey, most of the designers/pattern-makers haven’t figured out yet that they are not drafting for most of us and our real bodies. I don’t mind having to chop off sleeves for my short arms and add width for my Botticelli Belly. Or even adjust for my narrow/sloping/forward shoulders because those are not everybody’s problems. But when nearly everyone needs to do an FBA and the sleeve caps all have too much ease in them, then you know there’s something not right with the basic block/sloper and the grading system they use. At least one indie is taking this seriously though. StephC of 3 Hours Past has a great post on her thoughts on body shapes and pattern grading here. Something needs to change. And until it does, I’m on a pattern-buying moratorium. Which is cool because it forces me to get better at drafting my own.

Also, yes, I should come up with better names for my projects. However the practical person that I am is a) too lazy and b) can never remember what a fancier title refers to. I always envy those who can fling pattern numbers and sweater names around with abandon and actually recall what exactly each one looks like. I am not so lucky. Either that or my brain just doesn’t want to waste space on such trivia. It’s too busy remembering the lyrics to some stupid song from 1965. I’m digressing yet again, aren’t I?

So, as I’ve been hunting down sewing blogs recently I’ve certainly noticed a few things. Most of the bloggers are younger than me and a goodly percentage even younger than my children. Of course I don’t hold their youth against them in any way but it does mostly result in them having considerably different tastes to mine. Also they mostly have less extreme fitting issues than I do. While I can admire their efforts, praise their results and occasionally learn a few new tricks, I’m still (as usual) feeling very much on the fringes. For some reason even more so than in the knitting milieu.

Do I sound whiney? I’m not really. Lets face it, I’ve never in my life followed the crowd! (OK, maybe my total adoration of the Beatles as a teenager in the 1960’s…) However I would love-love-lovitty-love to have a sewing buddy who can help with fitting and perhaps even with my photography. My darling T-Man is very willing but not very skilled and not (yet!) often available when I’m in the throes of a project. I know lots of people who knit, weave, spin, and dye but only a few who sew and none who are interested in pursuing the Fine Art of Fitting with me. Oh well.

Meanwhile, I’m learning lots and actually enjoying myself muchly. I do apologise to my lovely readers who are not as obsessed with garment sewing as I am currently. I’m still knitting but it just goes around and around and around. Very pleasantly mindless. But not exciting to show off. If you hang in here though I might veer off at any time in another crafty direction. You never know. Damselflies are like that. They have wings and they know how to use them!

So go flit back to the studio, damselfly.

I suppose I am younger, but I've noticed the same thing. I wish I lived close enough to be your Extreme Issues sewing buddy!

I read young bloggers because I might learn something from them. But I sure do enjoy reading blogs by older, more experienced sewers - mid-lifers. That's why I follow your blog!

Sure you don't want to move to Vancouver, Trapunto? I would love to have you come play with me.

And Dixie dear, that's why I follow *your* blog too!