It seems that one post per week is the New Normal around here! Sorry about that. I’ve been distracted. For instance, we went camping to Manning Park this past weekend: 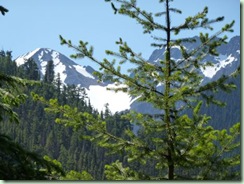 The weather was really hot (finally!) and that view of Mt. Frosty was about as cool as we could get. Not complaining though – the heat and sun have been a long time coming. My garden is pleased.

We camped with T-Man’s little brother and his sweet Quebecoise wife and it was a delightful getaway. When they weren’t walking my feet off, that is! On Saturday morning they casually mentioned that we all might like to hike to the second-to-last of the chain of lakes, Strike, to the wilderness campsite and back. Note that is farther than I’ve ever managed in all the decades I’ve been going to this park. I (just as casually) said yes. Here’s proof I made it to the end of Strike: 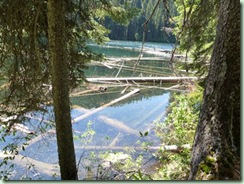 And actually about 5 minutes hike past that. But not as far as the campsite which turned out to be only another short distance because I suddenly realised I was too hot, hungry and thirsty to go on! Bro and Sis-in-law had forged on ahead but T and I backtracked a little way to a cool shady spot on the trail. After water, nuts and chocolate I was feeling revived so we sat and waited for the other two to return once they figured out we weren’t coming along.

However I did manage to make it back to camp ok, even with this handsome guy trying to block the trail: 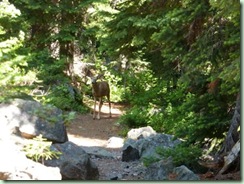 Mr. Buck finally turned and disappeared down the trail and we never caught another glimpse. We also were grateful that we didn’t run across the bear we heard about on this very trail the day before. I was really tired after that but surprisingly not very stiff at all so Sunday morning before leaving the park for our trip home we went for our traditional walk along Strawberry Flats. The snow was in its usual spot on the trail: 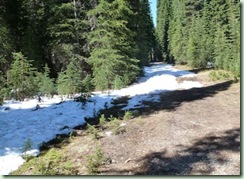 Though somewhat reduced from the pile we usually encounter in June. The snow was very cooling! We were able to walk on it for a little distance and finally make it to the bottom of the Gibson’s Pass ski run for the first time in years. Still not nearly as long of a hike as we did the day before – for which I was extremely grateful.

This was a good shakedown for the proposed 10-day campout in a couple of weeks with our kids and grandkids. We were distracted in our packing and managed to forget quite a few items! Luckily none of them were critical and at least we remembered the beer. Heh.

I got a little knitting done but not on Rosebud’s dress which takes some concentration. Instead I started a new pair of socks for T. He’s beginning to wear out several of his old pairs so I figured it was time for some more. I’m nearly down to the heel flap on both socks even though it got too hot to knit on the way home Sunday. For me at least, mindless knitting is faster than the kind where I have to pay attention.

Sounds like a lovely weekend. When I was a kid my family went camping in Manning Park all the time, but we never did any hikes. I remember loving the talks the park ranger would give in the ampitheatre in the evening. I wonder if they still do that.

What a fun weekend. The scenery is so beautiful. I love being outdoors in places like this, and it doesn't happen nearly enough. Thanks for the photos!

Manning is such a beautiful park! Not much of a camper - the old husband turned out to be violently allergic to mosquitoes - so we only camped once in the last 25 years. But I remember it from the days when I was a kid. We did a lot of camping between Hope & Manning Park in the 60s. My Dad loved to fish & 6 kids don't sit still long enough to go too far from home!!

A lovely area. You must live (relatively) close to me. I'm in Kamloops.

They still have the amphitheater programs in Manning, Heather! I remember taking my kids there when they were little. Perhaps we'll do that with the grandkids when we go back at the end of July.

I live in Vancouver, Myrna. Manning is about 3 hours away. When I was a kid we did it as a Sunday drive. Parents had to promise ice cream at the park lodge to get us to sit in the car that long!

T-Man taught our kids to fish too, Sharon. That way they'd be patient! Now the bigger grandkids are into it.