My oldest grandbeastie recently turned 8 and what she wanted for her present was to come and stay over and make stuffies with Granny. Yay! Another Maker in the family. Do I have lots to teach her in the future or what!? Must not overwhelm…

So we stole her away after her swimming lesson on Friday and the first order of business was to check out the new playground at our recently revamped park. Then it was on to a second nearby playground, one she was more familiar with since we’ve been taking all of the grandbeasties there when we have them over. Exhaustion was setting in for the Princess and her granny and grampa by then so home we went and got down to business.

The Pencil Princess decided that she needed to draw a picture of what she wanted to make: a moon, an apple, a fish and a dog. We deliberated and thought the dog might be a bit complicated for a first session but the other three items were quite possible. So while her grampa made us dinner, she and I repaired to the studio to work on the first stuffie. Using her awesome Pencil skills, she drew the pattern piece on freezer paper, I added the seam allowance and she cut the doubled fabric pieces out. We both sewed and stuffed and here he is: 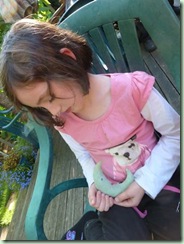 This is Mooney. He’s made from a piece of the hand-dyed sheets that I used for my Rag Quilt. He is stuffed with polyfill and has beady eyes and a red Sharpie mouth. He of course belongs in the sky: 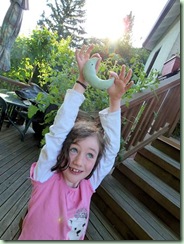 After a yummy barbeque chicken dinner we all watched an episode or two of Doctor Who before collapsing in bed. The next morning the Princess and her grampa made French toast for us and then she was raring to go on the next project. I got her stamping the fish’s fabric with scales in green metallic fabric paint so we could let it dry while we made the apple. The leaf was the hardest to do because it was very small, too small to turn and stuff. So we left it raw-edged and unstuffed. We stitched the veins on while learning how to switch the sewing machine from forward to reverse. The stem was easiest to make with a simple piece of brown jute string. The finished apple was named Singer because, even though she doesn’t have eyes or mouth she sings all the time.

The fish was a bit trickier. We had an important lesson in how to use the seam ripper when we forgot that the scales side goes on the inside when you need to turn the piece right-side out again. The fins were very small so I used the tiny tube turners to get them turned. Too hard for the Princess but she had no trouble stuffing them and we machine-stitched them to the body pieces securely before sewing the body together. By this time, she was brave enough to push the sewing machine peddle herself (though I still helped “steer” the pieces) and she’s an expert at stuffing. Her whip-stitching skills improved so much that all I had to do was hold the body steady while she sewed up the final tummy seam. The fish’s name is Lucy. She has googly eyes and is really cute. She can stand up on her fins. Very talented.

Here they all are: 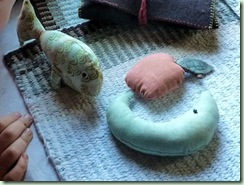 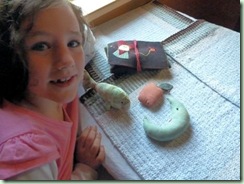 I also gave the Pencil Princess her own sewing kit. My friend Kirsten made it from felt with a cute angel stitched on the cover and I won it at our guild’s Christmas exchange one year. I think the Princess will get more use out of it and it’s a good way to keep the sharp things contained. Inside there are needles, pins, scissors, thread, measuring tape, seam ripper, dressmaker’s chalk, and a wooden needle case made by her grampa.

And there’s more! After lunch we went over to Cambie Street for a street fair. The Princess got her face painted (sparkly swirly heart), a balloon dog, a helium balloon, a whistle and, after standing in line for about an hour, she got a cartoon drawing of herself in Paris. She was so patient while waiting. She was watching the man draw everyone ahead of her with great interest and said she wanted to see what the “cartoon me” would look like. She knows about this stuff – after all, her daddy owns a comic book store! She is definitely an artist in the making.

Later after we took her home, she generously gave her yellow balloon dog to her little brother who missed her (and was possibly a little envious). He will get his turn to spend time with Granny & Grampa too. We usually have them both over together because it’s more convenient for everyone but sometimes it’s really nice to have a Special Time just to focus on an individual Beastie.

That was fun! Now it’s my turn to make stuff for me in the studio. I’m working on some tops to take camping. More anon.

Loved this! A needlework project I can really "relate" to!
Judith

Of course you can! She gets it from the distaff side too of course. LOL!!

Aren't they awesome at that age? My granddaughter is the same age as yours (turned 8 in April) and is also the one to carry on the crafting gene. Does one's heart good to know that there are young ones interested in creating, doesn't it?

Definitely! I got my first sewing machine when I was that age. 8-year-olds are The Best - before they get to the testy, cynical, parents-know-nothing teenaged years.

Crafting is fun with kids old enough to make interesting stuff. Now you'll have to teach her to knit & crochet so she can clothe all the naked dolls. I think I still have a booklet of Barbie knits somewhere - the little girl I made them for is 43 this year!! If you're lucky, she'll still love Stuffies when she's a teen.

I am so impressed! Mooney is my favorite, but they are all wonderful. You reminded me of getting my own first sewing kit--hastily assembled for me by my grandmother because the mom of the twins across the streets had made them each one in their old Easter basket, and I wanted to get in on the action. Do you remember your first sewing kit? I was probably a bit too young for mine, because I'm pretty sure the preprinted national-dress dolly yardage never resulted in a finished Ukrainian girl unless my gran sewed it. 8 is perfect, though! What a sweetheart. And looks quite a lot like you in that second picture...

That's how I started sewing - making Barbie outfits. Then I got my first hand-wound tiny Singer sewing machine when I was 8 and a "real" machine when I was 13. My mom never did learn to use it! I remember getting a sewing basket but don't remember how old I was then.