Emerging From The Sweatshop

I have been madly sewing up some new garments (mostly tops) to wear on our holiday. We can expect the weather in Oregon and northern California to be anything from very hot and dry to very cold, foggy and damp. Must pack layers that can be piled on and removed at a whim. These are all knits of one sort or another which are easy to pack and comfy to wear. I apologise for the boring non-modeled photos. I was in a hurry.

First up we have the shell I made with the leftovers of the green sport mesh from the Melia Tunic: 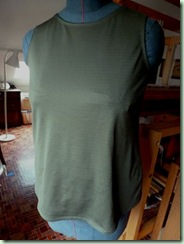 It’s pretty simple and the neckline and armholes are finished with dark green picot-edged elastic and a multi-zigzag stitch, the same way I would for lingerie. It can be worn as a lightweight top or as underwear. Doesn’t look quite so lumpy (I hope) on me as it does on the ever-patient Debbie.

Next I went for another simple top, my slightly modified version of the Kirsten Kimono Tee: 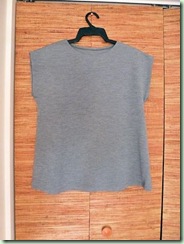 The fabric is a thick double-knit in a medium grey with an unknown fibre content. Less than a yard appeared in my stash from somewhere or other and I had trouble figuring out what to make from it. I wanted a skirt but the one I wanted wouldn’t fit on this remnant and since I already have a grey knit skirt, this was a better option. I made it slightly loose so it will layer over other pieces or it’s perfectly wearable on its own, if somewhat warmish. I call it the Pepper Tee. (Without the salt – get it?)

Then I got inspired by dear Shams and her L-Flounce Top. Had. To. Have. I think I did a pretty good job with this self-drafted version: 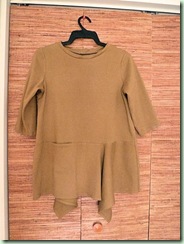 This mustard-coloured knit was a remnant from Dressew’s bin. (More 100% unknown fibres! Though I think it’s cotton/lycra. Possibly.) I made my version with the l-flounce going in opposite directions, 3/4 sleeves, and a small pocket in the cross-seam. You know. Just so Shams doesn’t think I’m copying her. ;) I kept the twisted neck band though. I love that detail. I had just enough fabric to squeeze this out.

Next we have a Pointy-Hem Tunic based on the Batik Shirt I made last October: 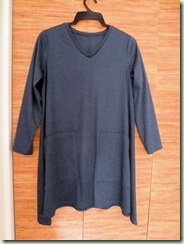 This navy cotton double-knit was lurking in my stash for eons. I was saving it for a dress but apparently it wanted to be a tunic. Apart from eliminating the centre front buttons and adding a neckband, I used the pattern exactly as I had drafted it for the woven rayon batik. I tried out Linda Maynard’s V-neck band instructions from The Dressmaker’s Handbook of Couture Sewing Techniques, which worked out pretty well for a first effort. I recently got that book and it was obviously worth it just for this! There’s just enough room under this tunic to wear a turtle-neck t-shirt if it gets colder.

Now we have an ancient UFO that somehow survived in my sewing drawer since the early 1990’s. Yikes! I couldn’t bring myself to chuck it and I never got around to sewing it until now. I do not know why. I give you the Rusty Tights: 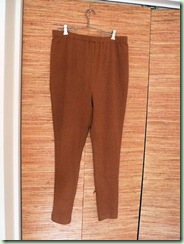 The reason I kept this project for so long is that I love the rusty brown of the cotton/lycra fabric. It was already cut out to my old TNT tights pattern which I was concerned wouldn’t fit me anymore. Hah! I had to take them in! (Go me.) I plan to work on this pattern a little more and get it perfected for more heavy-weight tights in the future.

No, we are not done yet! Next up is a refashion that has also been hiding in my sewing drawer for years. Sorry I forgot to take a photo of the original huge ‘90’s long-sleeved top. I bought it from the Sally Ann with plans to just use the fabric because the shoulders were completely stretched out from hanging on a hanger for probably 15 years. I liked the chocolate brown colour and was interested in working with slinky knit without trying to track down actual yardage. (Can you actually buy this stuff?) I used the same self-drafted pattern that I used to make the recent Pocket Tunic: 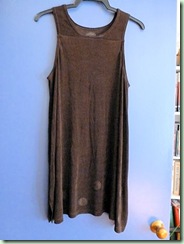 In order to avoid the stretched-out parts, I had to piece yokes on the back and front using sections cut from the sleeves. I stabilised the yoke and shoulder seams with clear elastic and the armholes and neckline with strips of fusible knit interfacing. I used a 4mm twin-needle to stitch the neck and armholes. Plus I had to mend a bit of the hem in the back where the cover-stitching was coming loose. The front yoke is a little wonky but who’s going to notice, I ask you? This stuff was like sewing rubber bands. They don’t call it slinky for nothing!

Then I got creative. Because this stuff was the Real Deal Slinky, I decided to try embossing. I used one of my hand-cut rubber stamps and went to town on the hems, plus one print on the back yoke just for fun. Here’s a detail: 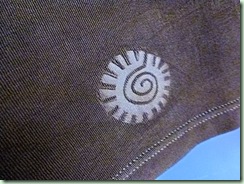 If you aren’t familiar with this technique, I placed the stamp on the ironing board, put the slinky fabric face-down over it, spritzed with a little water and pressed the medium-hot iron over it for a few seconds. Not too long or it will melt the fabric. No, it doesn’t wash out and is permanent. Worked a treat and I’m very pleased with the results. The embossing is a bit more subtle than the photo would have you believe and kind of shimmers in and out of view. This refashion is going to get a lot of wear, I can tell. I’m glad I waited until my sewing skills were up to the challenge.

Whew! That was a lot of sewing in one week. I kept having to change out the serger and sewing machine threads because, as you might have noticed, each piece was a different colour. So much for the rumour that I mostly wear black. Heh. I’m branching out. Especially with that mustard.

In other news, T-Man helped me process and freeze several bags of beans from the garden. Luckily things are winding down out there. We’re so ready to leave – at least in our heads! Not going anywhere until after the holiday weekend though. Tried that once and after 3 hours just to get through the border crossing, Never Again. Tuesday is the departure day. There’s still a lot to do around here first anyhow.

(I’ve got my knitting packed already!)

Hopefully I’ll get a chance to post again before we leave. I don’t have access to wifi while we’re camping and we are too lazy focused to stop at a wifi cafe or something somewhere on the road.

What a flash of productivity! Nice garments all. I love how you finished a UFO, used aged fabrics from your stash, and even did a refashion. The embossing with the stamp is a cool idea!
I wish I was going camping with you. It sounds like fun. And never mind keeping up with the blog while on vacay. Totally not necessary!

Thank you, sweetie, for your encouragement! Not to worry - I will share the holiday highlights when I return. Then you won't have to personally endure the heat, cold, bugs, hard bed, damp clothes and lack of shower facilities!

What an amazing sewing jag. I think of you almost every day as I survey my faded sloppy thrift store wardrobe and my piles of fabric waiting to be sewn. I say to myself "Think of what Louisa has done! Just get going!" Thanks, you are inspirational and I hope to show off one or two new outfits soon. Have a great holiday!

Thanks, Heather! You were much too busy stitching those fabulous birds to sew mundane stuff like clothes. Heh. I'll be looking forward to seeing some garments from your prolific fingers soon though.

Sounds like a wardrobe meant to be squished into a suitcase! Now if it was in Reds, Purples & Fuchsia with shorts . . . I really like that L flounce thing - might try that myself. And I think I'm gonna dig out my old legging pattern - I used to make my own in hot pink or black at one time since I like them close fitting but not tight! Guess I'll have to get the old machine out & work on the bins of fabric in the closet!!