So I got T-Man to take some photos of me in my new tunic: 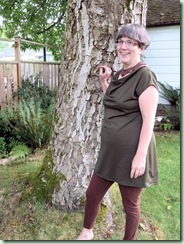 Comments:  This simple top gave me a harder time than it should have. It helped to have Sigrid’s great sewing tutorial printed out and in front of me. It’s not hard, but it was damned hot in my studio while I was working on it. I think my brains melted a little.

I’m still on the fence about this top. Perhaps the cowl is a little extreme especially when compared to Sigrid’s? The fabric is very lightweight which drapes well but also shows every lump! Even if T does think it’s sexy. Heh. I’m not sure how much wear I will get out of it in the long run. It was a great exercise in modifying a pattern though.

The secret weapon in this top are the strap keepers: 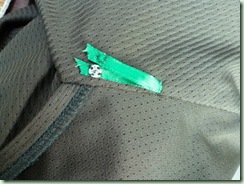 The whole thing kept shifting around on my shoulders and slipping back without them. They are indispensible.

About the name: Melia was one of the Meliae, the ash tree nymphs. Though that’s my walnut tree in the photo. Love the bark! The walnut nymphs were the Caryatids, but they got hijacked into columns – holding up architecture with baskets on their heads. Harumph. Here’s me being a tree nymph: 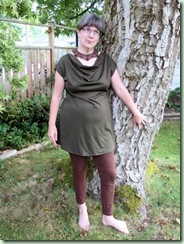 Notice this top gives me a chance to wear the Endira Necklace that I crocheted awhile back. I don’t have many garments with a suitable neckline but this one works.

In other news, I’ve been reworking the instructions for the Quercus cardigan. It’s a beautifully written pattern except that it seems hardly anybody can get the same gauge as the designer. I got stitch gauge just fine first try but row gauge is short by a whole stitch per inch. And yes, I washed and blocked my swatch! It’s a thing of beauty, I’ll tell you. Soft and slightly fuzzy. Not bad for a vintage cone of wool I inherited from who-knows-where. Anyway, I know wider rows would elongate anything that’s written in rows rather than to a specified length so I reworked the math in a few critical areas such as the armhole depth and the hip increases. Hopefully that will take care of it. I’m making a Medium which exactly matches my bust and hip measurements, not including the front bands which actually add an extra 6” to the width (and can be knit a bit wider still if necessary). I hope I’m not choosing a size too small but I don’t want to swim in it either. Such a fine dance between too loose and too tight in garments, isn’t it?

I love both your recent tunics. Can't go wrong with tree colors and classical drapery.

Thanks for your kind comments! I might perhaps wear this tunic in public some day...