(Channelling my inner granddaughter Rosebud there. She likes her words in threes.) Yes, I’m finally back! We actually came home Friday but have been madly catching up with things since then including five loads of laundry, picking beans and tomatoes and squash from the garden, sweeping the debris off the decks, downloading and attempting to read 350 emails, buying groceries, enjoying the luxuries of hot running water and clean sheets and little things like that. We really did have a wonderful time and the weather couldn’t have been better but it’s confirmed – there’s no place like home! I wouldn’t want to live anywhere else but here.

This was a holiday of Volcanoes and Desert vs. Surf and Sand as we travelled in a big loop through Washington, Oregon and northern California. Definitely lots of volcanoes! We saw a lot of the big guys: Mt. Baker, Mt. St. Helens, Mt. Hood… 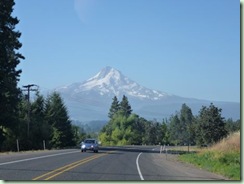 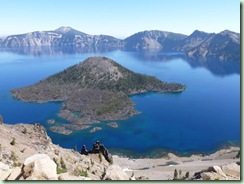 We explored lots of lava tubes, including the big one (a mile long!) in Oregon called the Lava River Cave and a whole bunch more at Lava Beds National Monument in northern California. Science lesson: lava tubes are formed when molten lava rivers cool and harden on the outside but the middle is still hot enough to flow out leaving behind rounded tunnels. Here’s the evidence that I actually was underground (for those who might find it hard to believe): 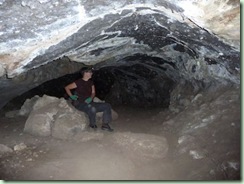 You might not be able to tell but that is several hundred feet in and without the flash it would be pitch dark! Note my chic headlamp and gloves plus I am wearing my one and only pair of jeans. I was too hot from exertion to need a jacket even though the temp was 13C. We also didn’t wear our bike helmets because it was actually easier to avoid hitting your head without the extra height of the helmet to confuse you. Every tube was different and all were incredibly fascinating. Some even sparkled silver and gold with tiny water drops held by bacteria. Sadly we couldn’t get a photo of how beautiful that was.

We climbed the Big Obsidian Flow at Newberry Crater again, this time in the sunshine instead of pelting rain: 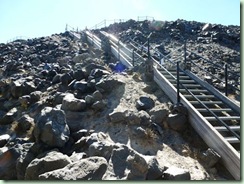 A sparkling mountain of black glass. Also at Newberry we hiked around the edge of Paulina Lake to the natural hot springs and simmered our toes: 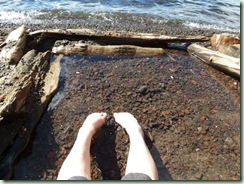 I had to find another pool that had lake water splashing in because this one was much too hot! Besides the volcanic stuff we did a lot of trail walking. At Cove Palisades we hiked up the steep switchbacks of the Tam-a-lau trail to the Peninsula. From here you can see Lake Billy Chinook (a dammed section of the Crooked River) to the right and an arm of the Deschutes River on the left: 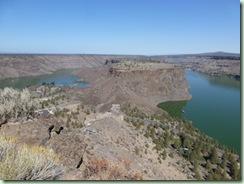 Such a pretty algae green. The Island in the middle is a unique ecosystem that’s protected and our campground was actually down in the gap between the Island and the Peninsula. It seems like most of the desert hikes included a lot of uphill and started at something like 6,000 feet! Hard on us sea level types, I’ll tell you. We also saw petroglyphs and rock paintings. There’s a preserved petroglyph rock at Cove Palisades. (Look over the edge of the cliff straight down there and you can almost see it!) Two of the lava caves at Lava Beds have rock paintings and there’s also a huge bluff (just outside but still part of the same National Monument) at Petroglyph Point. Along the edge of what had been a lake’s water line is covered with overlapping pictures and symbols and patterns of waves and dots: 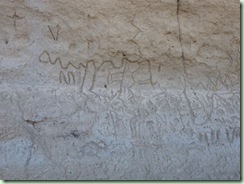 This is just a tiny section. Unfortunately they are now behind chain link fencing and barbed wire due to vandals. Apparently even the descents of the Modoc people have no idea what they all mean.

When we finally got to the ocean at Patrick Point just north of Eureka, CA, we were quite dried out from the heat and dust. It was pleasant to be back on the coast with the mist and fog. This particular beach is Nehalem: 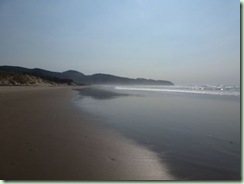 The hiking was mostly much more level. The road wasn’t though! We travelled the coast highway 101 all the way up the Oregon Coast, then diagonally across Washington to the Hood Canal, up to Port Townsend and over to Whidbey Island. Our last night was at Fort Casey which was very noisy during the day with the fighter jets flying around for hours on end. The Sound of Freedom, as they say.

The weather was sunny nearly the whole time and hot, at least during the day, especially at Cove Palisades where we pretty much melted in the afternoons. It got down to below freezing at night a couple of times though in Newberry Caldera and Crater Lake. Surprisingly it was pretty toasty even at night in Lava Beds. Once we got to the coast of course it was cooler during the days but not much colder at night. We only had a few tiny sprinkles of rain (mostly in early morning), high cloud when we needed it to cool off and a little fog. I’d call that pretty darn perfect weather.

Speaking of Crater Lake, we met a delightful couple at the Lost River campground while we were there. We don’t usually socialise when on holiday but were glad we made an exception this time. Shout out to Peg and Michael from Portland! Peg sews and knits and is on Ravelry as littlebugknits. Go say hey and tell her I sent you. 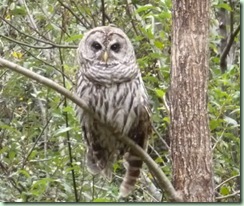 There were ospreys nearly every day, hawks of various kinds, a Lewis woodpecker, scrub and Stellars jays, turkey vultures, California quail, great blue herons and white egrets. Deer, jackrabbits, bunnies, lizards, snakes (no rattlers though), squirrels, chipmunks and ground squirrels. Harbour seals, porpoises (off the ferry), orca whale (from shore). We heard the barking of California sea lions but didn’t see them around the headland at Patrick Point. And we came home with raccoon footprints all over the front of the van! Cheeky devils.

What else? I haven’t mentioned the shopping! Going through Portland on our second day out we of course stopped at Powell’s Books. I managed to pick up a couple of independently published knitting books that I hadn’t been able to find. (More on them in a later post.) Then I navigated us to a new-to-me fabric shop, the Mill End Store. It was huge! But not very many patrons on a Wednesday noon. I managed to control myself but still managed to dent the budget quite a lot. I cleared off the end of a lot of bolts! This doesn’t show them very well but here’s the haul: 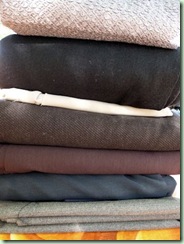 The colours were pretty neutral and mostly natural fibres too, except for that textured silver-grey poly on top and some non-static lining. (The orange on the bottom is the pumpkin-patterned tablecloth!) You’ll definitely hear more about them later. I have plans. I also stopped at the Jo-Ann’s in Lincoln City and picked up some muslin, both bleached and unbleached. My excuse is you can’t get it that cheaply here. In Port Townsend I got a couple of vials of beads from Wynwood’s to make some larger stitch markers. Yes, I know I already have lots of beads. So what?

In knitting news, I finished up the Kaffe’s Blues Socks the first day out. Then they went right on my feet. I immediately started my Oakmeal Cardi. I call it that because the pattern is Quercus (oak) and the woollen yarn looks like oatmeal. I knitted diligently on it the whole time we were away and I’m nearly done. It fits perfectly so I’m really happy that I reworked the math to accommodate my different row gauge and tweaking it for fit. Photo coming soon. I also started the Mezquita shawl pattern – twice. The second time I used a larger needle to cast on and also used the twisted German cast-on to make a stretchier edge. I then went down to a 4mm which is smaller than the recommended size so it will be a little smaller and denser. I’m calling it the Many Mosques Shawl (mezquita = mosque) and hoping that it blocks out flatter than it looks at the moment.

And that’s it for now. Clicking my ruby slippers together…

Wow!! Louisa, you always have the coolest vacations and reading about it makes me feel like I got to tag along!

Welcome home! And it sounds like a great trip. So much knitting accomplished too - you are amazing.

Thanks, Nancy and Heather (you accomplish a lot more than I do)!

Wow, never even heard of lava tubes. Sounds fabulous. I love rock forrmations, all the colours.
I make a point of going to the mill end store and fabric depot when in POrtland.

You can blame our interest in lava tubes on quilter Cynthia St. Charles. She posted about them and of course I had to go!

Sounds like a wonderful trip full of cool places to visit. Nice you could fit in some shopping, and great you had so much time for knitting!