The Sky Is Leaking

Rain! It feels rather odd to hear the dripping sounds this morning. It hasn’t rained around here since sometime back in July. I’m sure the plants are happy. But the people aren’t! Although I’m certainly enjoying the change, now that the autumn rains have finally set in we probably won’t get much of a break until next July. Such is the price of living in a mild coastal rain forest. Oh well. I have lots to occupy me indoors.

Anyhow, I managed to get quite a lot of gardening done over the last couple of days while it was still dry. The garlic is in and several more beds have been cleaned out and the fall rye mix planted. The green cover keeps the soil from washing away in the winter rains plus adds nutrition next spring when it gets turned under. The seeds are getting well watered in today! Excellent timing. We aren’t completely put to bed for the winter but some things aren’t ready to say goodbye yet.

In knitting news, here’s another FO for you: 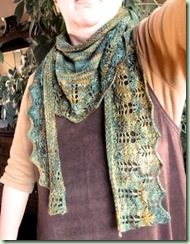 Mods: I started this with a regular long-tail cast-on but when I felt that the beginning was too tight I began again with the Twisted German Cast-On and a 5mm needle. (Yes, that would be 361 stitches cast on twice!) Switched back to 4mm in the next row. Then I bound off with the Estonian “knit 2 tog” bind-off on the wrong side. 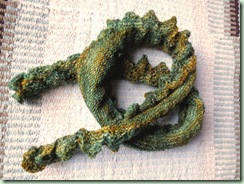 Comments: I’m a little disappointed with this scarf-sized shawlette. Not the size because I’m OK with it being smaller than the pattern states. After all I used a 2 sizes smaller needle and finer yarn which pretty much guarantees a smaller result, right? And I’m very intrigued by the crescent shape. However as one might judge by the before blocking photo, it’s a little uncooperative. Even after a hard blocking the darling thing still curls rather alarmingly. (The cool “stegosaurus” effect did go away though.) I likely should have gone up yet another needle size for the cast-on and at the end worked at least an inch of garter before binding off. Oh well. I love the colours and they coordinate with a large part of my wardrobe so it will probably get a lot of daily wear.

I have been very intrigued by this shawl shape, knitted lace edging from the bottom up with the plainer crescent-shaped top area formed by short rows. It’s been used to great effect by Susanna IC (for instance in the Annis shawl which I made last year) as well as several other designers – though I’m not sure who actually came up with it first. I decided I needed to try to create my own version using one of the lovely Estonian edgings in The Haapsalu Scarf, the second book by Siiri Reimann and Aime Edasi. They didn’t number or name the edgings but this is the top one on p.173, an expanded tree with a zigzag row of nupps underneath. Here’s my swatch: 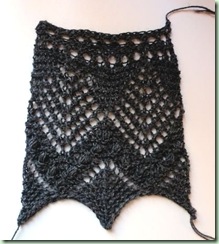 The dark charcoal yarn makes it kind of hard to see the nupps in this photo. They’re a little more defined in real life. The top section experiments with a small area of short-rows to suggest the crescent separated by eyelet rows. I used the k2tog bind-off on the wrong side as is traditional but I made a mistake in the beginning. The knitted-on cast-on with doubled yarn is correct but I accidentally skipped the return row 2 (all even rows are knit, except when purling the nupps to finish them off) so the loops are on the right side where I find them quite decorative. However, apparently in Estonian tradition they are supposed to be on the non-public side and the plainer side is the public side. I had a big debate with myself on whether or not to be traditional. I’m not above being a rebel sometimes but the “correct” way won out on the actual shawl.

Lest you think I’ve gotten very far on this project, I’m only on the third row so far! Not enough there to photograph yet. It’s all garter stitch so at least there will be no issues with curling. The main yarn is DGB Confetti but I don’t have quite enough so I’m going to knit the crescent area in a dark burgundy red Sisu. It’s really 2 plies of charcoal and one of white but I overdyed it in dark red years ago when I thought I was going to run out of yarn for a pair of T-Man’s socks. There’s only one 50g skein and it coordinates really well with the charcoal Confetti. There had better be enough because there ain’t no more.

I’ve tried to find other uses than socks for this particular Confetti yarn. I usually like this stuff the best because it’s really long-wearing but the way they made this particular colour doesn’t hold up to a great deal of friction. The manufacturers mixed white nylon with black wool to get the deep charcoal gray but unfortunately the lighter nylon pills show badly on the dark surface. These are my gloves from 2008: 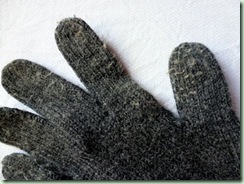 See what I mean? Nylon dyes the same as wool so when they do the printed colourways any pills will be the same colour as the wool underneath. Not with this yarn. The contrast just makes them look blech. I now wear these for non-fancy occasions only. No, I’m not going to chuck them until they actually wear out. Too much work to knit gloves. Unfortunately it’s the only way (apart from the dollar store stretchies) that I can get gloves that fit my teensy hands.

Anyway, I’ve already used up one ball plus leftovers from the gloves for the last round on T-Man’s 10 Stitch Blanket (which he’s been using, BTW). I hope it doesn’t show the same kind of wear on an afghan as it does in gloves. Or in my Black Spruce Shawl. After this it will be the end of the colour number 9030 in my stash. And the overdyed Sisu as well. I’m not using Sisu for socks any more either because it tends to wear out faster than some of the other yarns. Probably because it’s a 3-ply instead of 4 and not quite as tightly twisted. After knitting well over a hundred pairs of socks, one comes to understand which yarns might last longest. Don’t you agree?

Love the many mosques.