Pie charts, that is. I’ve seen so many on the sewing blogs that I managed to catch Pie Chart Fever! So I got my sewing stats together and hunted down an online maker (this one). And here’s the grand reveal: 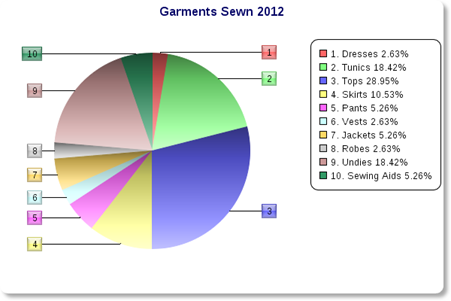 As you can see, I’ve got the biggest fondness for tops and tunics. Undies also rate highly probably because they don’t use much fabric and (with the exception of bras) they are fast and easy. This year I want to make more dresses and pants to round out my wardrobe a little better. We’ll see how that goes.

I also wanted to see where the patterns originated that I used: 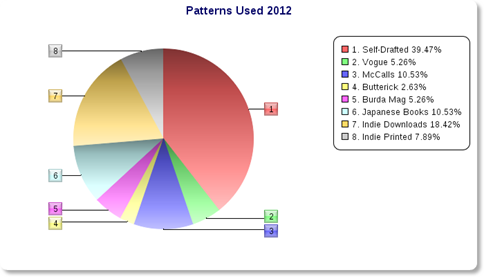 This chart sure makes it obvious that I’ve been using my own pattern-making skills more than ever before! Of the Big 4 patterns, I sewed the most McCalls. The two Japanese books I used were Simple Modern Sewing and I Am Cute Dresses, both in English translations. I also sewed a couple of patterns from BurdaStyle magazine this year, even though I’ve pretty much stopped buying new issues. For simplicity’s sake I lumped together the independent pattern designers which include Maria Denmark, Dixie DIY, and the BurdaStyle website. These were all download-print-and-assemble patterns. The one indie printed paper pattern was the Pin-Up Girls bra which I ordered online. Apart from my own self-drafted ones, every pattern still needed some fitting adjustments, some of them fairly major. None of the other popular pattern companies sifted up to the top of the pile this year. Who knows what next year’s story will be, eh?

Enough retrospection. Did everyone enjoy ringing in the New Year? We tried to sleep through it but some folks were letting off firecrackers on-and-off for several hours. Just as we’d drift back to sleep…bam-bam-bam! And the ships out in the harbour always wake us up at midnight. They sound so cheerful with each one trying to out-blast the others! And of course the neighbours banging on the pots and pans. Then we had a fun New Year’s gathering of the clan at my dear brother-in-law’s. Apart from this stinkin’ cold (which I pray I didn’t pass on), I had a great time. Of course by the end of the evening, I was croaking and squeaking like a weird combination frog-mouse! Too much talking and laughing. I’ve been laying low ever since in an attempt to get over this darn bug. Nothing else of excitement has been going on though I’ve done a tonne of reading and some desultory knitting. I didn’t even get out to enjoy the sunshine that we’ve had for the last few days. Bleh. Hoping for better things soon.

hmmm, pie charts...sounds interesting. I might have a go at that, especially if I need a break from sewing something badly. You know what I mean? So where did you get that pie chart form from. I'll have to go back and check it out. I have not idea of hand if I've made more of one type of thing than another. Most of my stuff has been refashions from my old clothes, but lately I've been using Vogue patterns on made-from-scratch stuff.

It was actually pretty quiet here in Chicago around midnight on New Year's Eve. At least I slept through it. Feel better soon.

There's lots of free chart makers if you google. Just plug in your data and save the image. I linked to the one I used.

I love your refashions, Pat! I'm only just learning to chop into things. I always get frustrated if there's not quite enough fabric for the thing I envision. I need to work a little looser.

Thanks for the get-well wishes, hon'!